The Neon Demon – The Magic Power Of Evil Beautiful Women 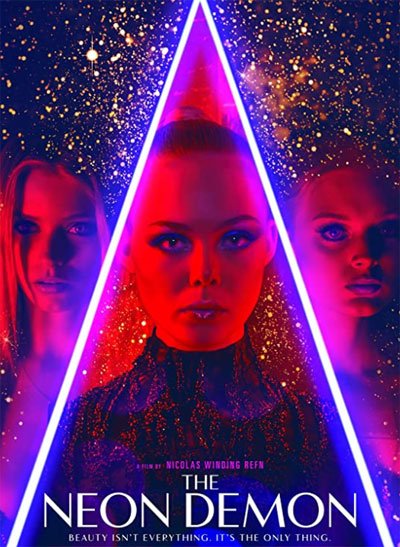 The Neon Demon is a charming, scary, and mysterious 2016 movie by director Nicolas Winding Refn, famous for his refined and sophisticated style.

We follow the life of a young girl seeking fame and glory that dreams of joining LA’s top models’ world.

Although starting from nothing, she immediately charms the professionals of the best photo agencies with her innate beauty.

Along with rapid rise to success, of course, also grows the envy of all the other girls working in that environment.

They suffer tremendously from her clean and natural charm, unlike their beauty which relies on cosmetics or surgery.

At the same time, the hotel manager where she lives becomes a more dangerous and dark character every day.

In addition, her boyfriend seems to detach himself from her as much as her career becomes essential.

The naive boy loves her, but he can’t compete with the wealth and popularity of the characters around her.

Her success seems to have no limits, as does the power of her beauty, of which she becomes more aware every day.

However, just when it seems that nothing and no one can stop her, fate shows up with a brutal reckoning.

Indeed, other models that she leaves behind the wish to destroy and steal her youthful and candid appeal.

The initial envy then becomes an actual collective obsession, which will take these women beyond the edge of madness.

Ancient witchcraft in a modern style

Like other Nicolas Winding Refn movies, 2016’s The Neon Demon divided audiences between love and loathing.

I understood the story as an original modern horror film and obviously a critique of today’s obsession with aesthetic perfection.

While there is no devil to sell her soul to, the protagonist’s relentless pursuit of success is an unconscious Faust-like pact.

The way the director shows us and narrates the plot, this beautiful girl could very well be a young witch.

Magically climbing the heights of fame, she enchants every photo agency’s cynical, cruel professionals with her innocent charm.

It is enough for them to look at her just once, and that is enough to love her madly and immediately.

Can’t we consider this a kind of spell, although never openly shown in this sense?

So she naturally gains what other models achieve with strict diets, sacrifices, painful injections, and surgeries.

Every scene has a supernatural resonance as if this world is something totally alien to our reality.

These girls struggle with fascination and attraction, with almost cabalistic rituals in what seems almost like an evil cult.

They literally do anything to get the most elegant dress and the most striking hairstyle during a fashion show.

Competing for the attention of the best photographers is their life, seeking the best shoots in the magazines of the most prestigious agencies.

The ending is open to multiple interpretations, including a soul sacrifice for the rebirth of these ruthless top models.

The colors have the classic Italian horror exaggeration, a style the director is famously an admirer of.

The blood is bright red as in Dario Argento and Lucio Fulci movies, and the dark atmosphere of suspense.

Incredible is the supernatural lighting of purple, green and blue light as in the old cult movies by Mario Bava.

Indeed we remember Refn produced the new edition of Planet of the Vampires, the forerunner of Ridley Scott‘s legendary Alien.

Refn reinvents this inspiration with a slow pace, fantasy imagery, and an incredible electronic-techno mix.

The beautiful Elle Fanning has the leading role, playing it with a current past as a model in Los Angeles.

We can only speculate if the girl is as naive as she seems or if she deviously exploits her power.

Is she aware of what she is doing, or does this emerge as a natural consequence of her beauty?

As mentioned, the story ambiguously leaves her nature up to our interpretation without ever making anything explicit.

Finally, we also have an unusual and terrible Keanu Reeves as her hotel’s slimy and rude manager.

It’s a role deviating from the usual John Wick unbeatable hero showing how good he is at acting and not just action.

The Neon Demon, unfortunately, didn’t gross much in 2016, being a divisive and uncomplimentary movie to the audience.

For anyone inclined to search for it, the secrets of characters and situations remain there to be discovered.

Classic Famous Fundamentals – How Old must be Cult Movies?