Runaway – A Thrilling High Tech Story About Our Future World 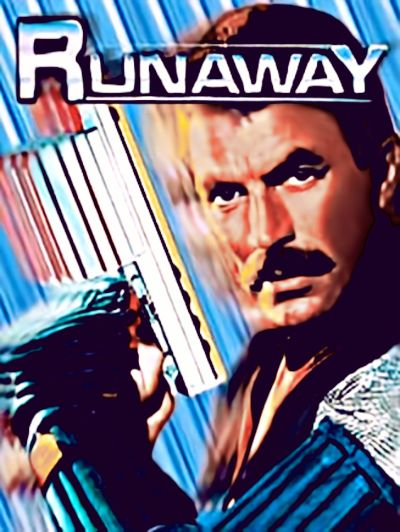 The story takes place in a near hypothetical future where robots are everywhere, performing every domestic or industrial task.

With such wide use, inevitably, accidents happen, and some malfunctions put people in danger.

So the police select cops to manage these cases with damage to the property or even severe danger to humans.

A veteran sergeant of the service, widowed and respected by all his colleagues, is the most experienced in this particular field.

His superiors pair him with a young recruit to investigate these faulty robots, also known as Runaways.

Several strange incidents have happened recently, with some of these mechanical servants even killing their owners.

Upon examining these models, the cop finds strange chips inside that differ from the model’s original specifications.

Tracing the origin of these chips, he discovers that they are a military prototype to tamper with and use at will any robot.

His investigation leads to the mysterious killer behind the murders, looking for the schematics he lacks to complete his technology.

This psychopath will start an open war with the cop, threatening to kill his son to achieve his goal.

There will be nowhere left for the cop to be safe, as the killer’s small but deadly robots seem to be able to get anywhere.

A revolutionary filmmaker and writer

Michael Crichton was, in my youth, one of my favorite authors, probably along with the great Stephen King.

Indeed they were the first whose books I ever read for my pleasure and not for a homework assignment.

His writing was brilliant, with a cinematic pace and lots of detail in explaining his storylines scientifically.

Compared to his colleague and master of horror, he was also a great director making his mark on cinema history.

Stephen King directed only one movie, Maximum Overdrive, with a script that did not work as the original novel and a poor moviemaking technique.

Michael Crichton has always directed some excellent movies like Coma or The First Great Train Robbery with excellent craftsmanship.

Not to mention his great masterpiece of 1973, Westworld, which has also become a successful series in recent years.

To understand its influence over time, even James Cameron paid homage to it in the final sequence of Terminator.

His vision of possible technological evolutions was very modern, and the ethical complications it entailed.

Runaway is not as perfect, but it is still an original sci-fi crime movie with the only misfortune of being released in 1984.

That same year it had competition from Terminator, Ghostbusters, and Sergio Leone‘s immortal Once Upon a Time in America.

While I love Crichton’s work, this movie doesn’t reach those levels and, therefore, failed at the box office.

However, this world is fascinating, dealing with issues of our near future now becoming a reality for us all.

Runaway is a fascinating sci-fi detective story full of ideas that were ahead of their time.

We see a prophetic imagination in the appliances and gadgets that are now daily use in our technologically smart homes.

In addition to all this, the pure entertainment part is just as exciting, well-written and directed.

The undisputed protagonist of the whole story is Tom Selleck, at that time highly famous for the series Magnum PI.

Instead of being a charming detective, a sergeant with a troubled past lives alone with his young son.

Ironically, he transfers to the robot section to work more quietly instead of ending up in the eye of the storm.

The blonde policewoman Cynthia Rhodes had just arrived at the department at his side after many side jobs.

Leaving behind her roles as a dancer in Dirty Dancing and Staying Alive, she plays a modern woman of action in this movie.

She is a policewoman with much to learn and yet tenacious when helping her boss, especially when alone to save his son.

His face exudes lucid madness and ruthless intelligence, embodying the improper use that can be made of the wonders of technology.

Awe-inspiring is his hi-tech arsenal, which includes venomous mech-spiders and guns with automatic search rocket projectiles.

Summing up, Runaway is still a great sci-fi entertainment movie, of which I wouldn’t mind seeing a remake being now from the distant old 1984.

Classic Famous Fundamentals – How Old must be Cult Movies?