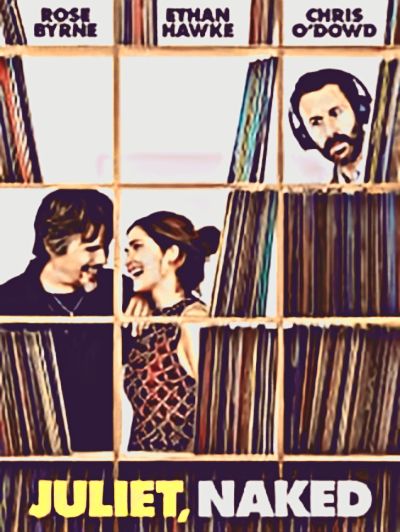 The story begins with a woman who has always lived in a small seaside town, working in the local museum.

She would like to start a family with her man, but he prefers to leave their relationship in the deadlock where it is.

The man is much more obsessed with an old rock star legend, about whom nothing has been heard for years.

Nevertheless, he talks non-stop about his music and his life, running a blog with other fans of the singer.

Until they receive a recording labeled Juliet Naked, which supposedly is an unreleased track by the rock star.

He immediately idolizes this song, spending even more time on his blog discussing it night and day.

The woman, at that point exasperated, angrily writes a comment in which she criticizes the stupidity of the obsessed fans.

Despite many people objecting to her, some respond by complimenting and agreeing with everything she says.

Starting to write emails with this person, she discovers that incredibly it is the same singer.

They become friends and start writing regularly, not just about music but about how their lives are going.

When the opportunity presents itself, they finally make a date and decide to meet in London.

But on the very day of their meeting, he falls ill and has to be hospitalized, where his family, whom he hadn’t seen in a long time, rushes in.

Observing their relationship closely, she then discovers a man very different from the legend that his fans believe.

Moreover, a feeling begins to develop between the two, perhaps even more vital than simple friendship.

The unpredictability of fate and social networks

This comedy contrasts the over-the-top mythologizing of stars against their natural and fallacious humanity with very British humor.

The story unfolds at a slow romantic pace with sudden comedy surges, returning quietly soon after.

It is a very reasonable swinging but balanced pace that we can compare to our ordinary lives.

Maybe we go days or even months without anything happening, and then suddenly comes one mess after another.

The same goes for the characters in this story, who are now tired and disillusioned that their lives can change.

But even something as stupid as a post on the internet can subvert the ordinariness of their ever-changing days.

Indeed, this small stone thrown into a lake suddenly becomes an unstoppable wave.

The romantic and funny part is how these characters influence each other, comparing their disappointments and dreams.

For example, unfortunately, the woman cannot have children, while the singer is literally surrounded by the children he has had over the years.

Equally ironic is the myth fans build through fake news, crafting an image of someone who doesn’t exist.

If this blind exaltation already existed before social networks, everything is elevated almost to the status of collective hallucination.

Don’t get me wrong; I also love pop culture and the various nerdy niches of music, film, and games.

But often, a discussion becomes toxic for no reason at all, poisoning the passion that should keep a group together.

Juliet Naked deals with these themes lightly and adorably within a bizarre love triangle with old-fashioned comedic timing for a 2018 movie.

Rose Byrne is a lovely and gentle protagonist, also very believable in the role of the ordinary woman.

She is an insecure woman, seemingly succumbing to her man’s insane musical fixation and accepting his influence on both of their lives.

When he finally stops indulging him, she begins to discover herself for the first time and start a new, happier life.

Ethan Hawke is equally solid and likable as the fallen rock star, a man with a difficult past and an even more complicated present.

He appears selfish and stupid on many occasions, but he is also protective of his youngest son, who has always lived with him.

Freed from his legendary role cherished by crowds years earlier, he is first to listen to what she says.

Because of this, their friendship eventually becomes romantic, putting the fan in the difficult position of being jealous of his myth.

Chris O’Dowd is hilarious in this role, a stubborn adult as a child who never listens to anyone’s opinion.

Even when he finally meets him, he initially thinks it’s a joke and demands to know more about the rock star’s life than he does.

Jesse Peretz directs this comedy pleasingly, mixing funny situations and dialogue with a bit of romance and philosophy.

Unfortunately, Juliet Naked is a movie that grossed little at the box office in 2018, perhaps due to poor distribution and promotion.

I consider it a beautiful carousel of situations suitable for everyone, which brilliantly succeeds in leaving with a wistful smile.

Runaway – A Thrilling High Tech Story About Our Future World

Desperado – Revenge Has An Exciting...