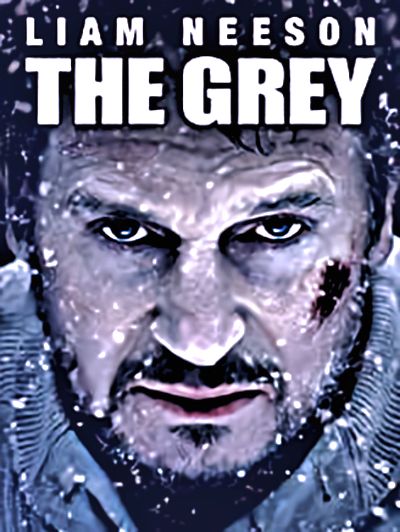 After the 2010 disappointing The A-Team, director Joe Carnahan works with Liam Neeson for another movie in 2011, The Grey.

The story concerns a group of workers returning home after a long shift at an Alaskan refinery.

Suddenly their plane crashes, and they find in the isolation of the cold without resources or contact with the world.

Furthermore, a pack of wolves nearby begins to get closer and closer to their makeshift camp.

Initially attracted by the fire they have lit to keep warm, they become more ferocious after tasting human blood.

The men brutally kill a wolf and expose its head as a trophy in response to the aggression.

With an immense reaction of murderous rage, the rest of the pack begins to track them relentlessly, searching for revenge.

Survivors at that point realize they have made a terrible mistake, defying a force far beyond their strength.

They fled along the endless expanse of snow, desperately searching for help or some sign of human civilization.

They become more tired and discouraged every hour, remaining fewer and fewer as they endure the cold and injuries.

Their only hope of rescue is an old hunter in charge of security at the refinery.

The man is the one with experience surviving in the wild, trying to keep the group together despite the fear.

But even he hides something unmentionable, a pain buried in his soul about his wife.

The fight against wolves becomes a kind of redemption, perhaps a final venture to end his life proudly.

The Grey is an excellent survival story and definitely my favorite movie of 2011, along with Andrew Niccol‘s In Time.

It is a vicious scenario where men stand alone against nature’s implacable force, not siding between them and the wolves.

I must say that compared to other survival of this type, the group remains quite united despite everything.

Unfortunately, that’s not enough because wolves are in their environment, and they are inconvenient intruders.

The story is wide-ranging with a slow pace that allows the narrative and the characters to develop fully.

In addition, the wilderness locations are magnificent, totally immersed in the natural light and shadows of the forest.

A long walk in a seemingly endless expanse of trees and snow, where it seems humanity has never set foot.

The behavior of the animals is also fascinating, perhaps not very believable, but highly functional to the story.

After humans impale one wolf’s head as a challenge, the pack strikes back by howling with a vengeance in a very human-like rage.

Conversely, the men almost make peace with nature near the end, putting aside their behaviors until then.

Although this reconciliation takes place in an undoubtedly violent way, the acceptance of a superior force makes them ready for the decisive moment.

For example, Liam Neeson himself shouts and curses against God, raising his head to the sky and looking around astonished.

Then he understands that God is the uncaring nature surrounding him, the river water as the cold snow or the ravenous wolves chasing him.

Skillful yet erratic actor and director

Liam Neeson is a perfect protagonist who is both strong and skilled and intensely fragile from a tragic personal loss.

He is a hunter almost without a past, except sporadic flashbacks of his wife and father in his childhood.

Few but effective moments create a mythical character without ever fully narrating the background.

Sometimes, I am surprised that Neeson participates in stupid and useless actions like the Taken saga or The A-Team.

However, when I see performances like this, I forgive him for everything, reminding me how damn good an actor is.

As for the director Joe Carnahan, pretty much the same thing applies, or how he sometimes wastes his talent.

While The A-Team or Smokin’ Aces were successful movies, I prefer when he focuses more on the characters like in 2002’s Narc or 2011’s The Grey.

Despite the violence and gore, this story is an act of love towards nature untouched by the presence and oppression of humans.

A cruel poem where the magical sounds of a river or wind are the best part of the soundtrack.

Carnahan hits the mark perfectly; choosing the proper editing and cinematography is a great supporting cast, such as his trusty Frank Grillo.

The film earned good box office worldwide, signing another success for the director, although today I see that few remember him on the internet.

Moreover, it seems not many other directors follow the footsteps of an action like this, which for once really has a soul.

At least as far as big American blockbusters are concerned, focusing on the superhero genre from comic books still seems the safest way.