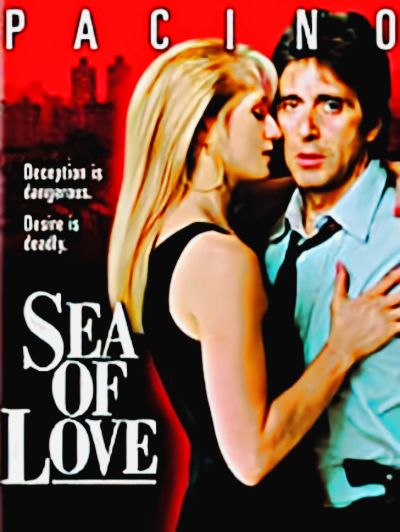 Sea of Love is a stunning 1989 thriller starring a hot pair of movie stars, Al Pacino and Ellen Barkin.

The story begins in New York with a detective who has to investigate a peculiar case of a sex murder.

Indeed, the victim has been found lying face down in bed, completely naked, with a bullet in his head.

Initially, there are few clues on which to build theories about a strange motive of a passionate type.

Talking to another district colleague, he discovers that a similar crime has occurred in another part of the city.

The two policemen then convince their bosses to let them work together, forming a special unit for the occasion.

Their theory is that the murderer is a woman and that she met these men through an ad service for lonely hearts.

They propose to pose as men looking for companionship, writing a poem to be published as the victims have done.

Their bosses scoff at their proposal, dismissing the idea of arranging love dates as nonsense.

But when a third victim pops up, again using the same modus operandi, they finally give their plan the green light.

Under the surveillance of their colleagues, they go out with some women to secretly take fingerprints.

Among the many lonely ladies they meet through an ad, a sexy blonde particularly catches the cop’s eye.

He starts dating her outside of work, quickly establishing a passionate sexual relationship.

Unfortunately, he begins to suspect her soon, believing she may be the mysterious murderer everyone is looking for.

Harold Becker makes an excellent mix of tension and feelings for a 1989 movie on the notes of the famous Sea of Love.

Arranging the song for the occasion with the help of the great Tom Waits accompanies the victims’ death.

As in many other crime movies, the story begins with a couple of policemen investigating the murders.

The protagonist is a guy in crisis, uncomfortable with colleagues but especially with the one now with his ex-woman.

To avoid thinking about it, he throws himself body and soul on the case, finding much more than what he is looking for.

The mysterious blonde of the appointment immediately enters his soul, shaking his personal and professional convictions.

Excitement is amplified by the danger that she may be a psychopathic murderer who kills her partners after consuming them.

At that point, the story veers on the sentimental, losing some tension but recovers with the excellent final.

I think the plot is acceptable, not necessarily good, but functional to the various moments and situations of the movie.

The cast’s fantastic state of mind elevates Sea of Love to other similar movies before and after 1989.

In this sense, the cover with Al Pacino and Ellen Barkin is more than enough to tell you what you need to know about this movie.

I would have added maybe the shadow of the gigantic John Goodman in the background, as always an exceptional actor in every role.

In any case, this remains one of the best sexy thrillers of the 90s, still as valid today as it was yesterday.

Sometimes the cast is bigger than the plot

As mentioned, the plot of Sea of Love stands without infamy or praise, not remarkably better than other 1989 movies.

What makes the difference is the superb performance of a trio of actors at the height of their magnificence.

Above them all, no doubt, stands a neurotic and likable Al Pacino, an alcoholic cop with a messy life.

Coming off great successes such as Serpico and Scarface, his performance is between these two characters.

He is always on the verge of a nervous breakdown, and he finally goes completely adrift when he meets the bewitching Ellen Barkin.

The actress had already been a sexy, evil criminal in Johnny Handsome in the same year, an even better role.

Her beauty is initially shameless and aggressive here, becoming sweeter and more maternal when we learn about her personal life.

On the other hand, John Goodman is largely the most likable of the bunch, with an irresistible smile and wit.

His role is more about being Pacino’s sidekick and a bit of his conscience, reminding him of the danger he’s in with the woman.

Finally, it’s impossible not to mention Michael Rooker, one of my favorite actors since Henry: Portrait of a Serial Killer.

There are only a few minutes for him in a role that I don’t want to spoil, but he manages, as always, to conquer the scene like a few others.

In conclusion, I recommend Sea of Love to all lovers looking for thrillers, maybe even with a bit of nostalgia for the movies of 1989.

Indeed, it will be an evening that you will enjoy remembering while admiring some great movie stars of those times.