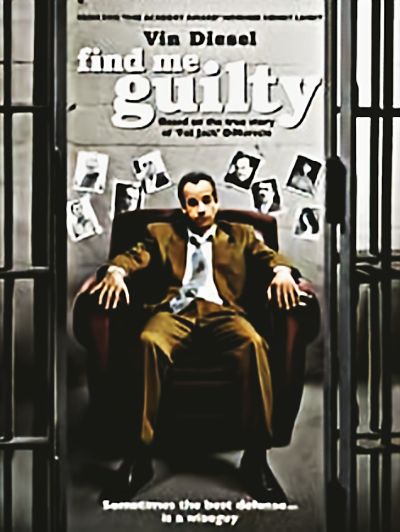 Find Me Guilty is a 2006 courtroom movie, one of the last by the great Sidney Lumet and starring a hilarious Vin Diesel.

It all starts with one of his henchmen breaking into his house and shooting him repeatedly while he’s still in bed.

The man, however, does not die but ends up in prison with a sentence for possession and distribution of drugs.

Shortly afterward, one of the biggest and longest trials in American history begins, involving his entire gang.

It was precisely the guy who shot him who framed them all, testifying in exchange for FBI protection.

The prosecutor clarifies to him that he may have the same betrayal, confessing to the crimes of his friends.

But he refuses with disdain and even decides to go to trial without a lawyer, sure that they will convict him anyway.

The judge will reprimand him several times, given his vulgar and aggressive behavior with witnesses and other lawyers.

Moreover, many criminals hate his guts because he went from one crime family to another in the past.

But slowly, his sympathy and blunt manner of speaking win the jury’s trust.

Even the prosecutor considers him enemy number one, beginning to fear losing.

So he begins to annoy him outside of court, making life difficult for him every time he returns to prison.

The prosecution and defense battle it out relentlessly while months pass for what will become the longest mob trial in American history.

Find Me Guilty is a 2006 legal movie but fortunately old-fashioned, with the pace and tone of classic comedy.

Inspired by true events, the story takes place during over a year of exasperating court hearings.

Morally it takes no sides, showing the criminals for their violence with their friendly and cocky attitude.

Similarly, the prosecutor and the prosecuting attorneys are not heroes at all, resorting to any impropriety to win the case.

In the criminal and self-advocate role, there is an exceptional Vin Diesel, undoubtedly in the best performance of his life.

Usually engaged in muscular alpha male roles, this story brings out an unsuspected comic verve from him.

Personally, it’s my favorite movie starring this actor, besides some memorable performances like Pitch Black and Boiler Room.

This film shows the actor’s unconfirmed later abilities, more self-deprecating, complex, and sensitive than the usual invincible macho with biceps of steel he has become now.

Besides the comedy, there are dramatic and touching moments about family and supposed friends surrounding this character.

Indeed, many defendants are former members of other gangs who hate each other, betraying lifelong friends after arrest.

Once inside, many of them negotiate with the prosecution for shorter sentences or even drugs and other personal favors.

In short, this is a story where it’s hard to tell who the good guys and bad guys really are.

Although the distinction between criminals and law enforcers should be easy, the director implies that the line is often very blurry.

What is certain is the brilliance of the screenplay and the artistry of pacing in the narrative, where Lumet is one of the undisputed greatest masters.

Sadly, this magnificent legal comedy is the penultimate film of Sidney Lumet, who sadly left us forever in 2011.

Curiously, the director had started in the 50s precisely with a judicial story entirely in the jury room, 12 Angry Men.

In this case, he decided to focus on brilliant and funny dialogues without neglecting the psychological and emotional side of the various characters.

Close to Vin Diesel all the time, Peter Dinklage plays his only friend as one of the many defense attorneys.

Quickly realizing the positive influence he can have on the jury, he helps him become friends with the gang again.

She then tries to keep him from getting kicked out of the trial by advising him never to disrespect the judge, played by Ron Silver.

He is a powerful man for whom everyone immediately feels fear and respect, but he is also reasonable and sarcastic.

He was an honest judge willing to accept others’ arguments without hostility or easy racism toward Italian Americans.

Given these points, Find Me Guilty is a unique film and another unforgettable piece in the filmography of a superb master of cinema.

Unfortunately, it was a box office flop, forgotten too quickly by critics and ignored by audiences.

However, I haven’t forgotten it, and I am sure you’ll love and recommend it if you give it a chance.