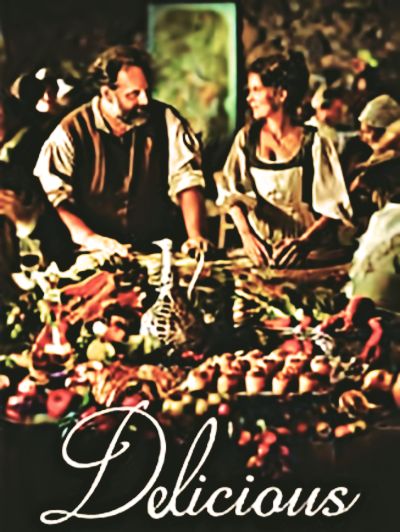 Delicious is a lovable movie from 2021 that puts tasty meals on the table and class struggle during the French Revolution of the late 1700s.

The story begins with the head chef of the court preparing a sumptuous banquet at a chateau.

After serving all the courses, his master Duke summons him in front of his guests, who shower him with compliments.

Nevertheless, they all change their minds when they see that the cook has prepared a dish of vulgar potatoes.

They insult the poor man mercilessly, embarrassing the Duke to the point that he dismisses him out of hand.

With nowhere else to go, the cook and his son return to the old bakery where his father used to make bread.

However, the place is actually more like a staging station for stagecoaches, where travelers rest while eating something unpretentious.

The cook yearns to get back into the Duke’s good graces while training a woman with his cooking skills.

But when he realizes that his former master doesn’t want to come, he decides to turn his dive bar into an authentic restaurant.

Fortunately, there is no shortage of customers, given the many soldiers going between the cities and the countryside.

All over France, indeed, a rebellion breaks out, with the people sick and tired of starving while the nobles enjoy a pleasant life.

At the same time, between him and the woman, he trains a feeling is born that becomes more intense every day, stimulating each other with their skills as cooks.

This woman, however, has an entirely different plan in mind, wishing instead to settle a personal feud against the cruel and arrogant Duke.

A sweet parody of modern cuisine

What I expected from Delicious was to watch a 2021 vintage rom-com, but this movie was able to surprise me.

Indeed, the moments of drama are not lacking, and the plot has some interesting twists and clever political subtexts.

The portrayal of the nobles is what we all expect, being people who are as stupid as they are vain and useless.

Their denial of reality is apparent in the carelessness they face the revolution, thinking that they are superior by birthright.

It is no coincidence that all ends precisely one day before the fall of the Bastille, the historic Parisian stronghold.

After then, even the nobles’ heads would begin to fall, laying the foundations for the universal rights of human beings.

Parallel to the historical events, narrated by distant voices of travelers to the protagonists, a cuisine evolution also takes place.

The cook, his son, and the woman have a series of ingenious ideas to revolutionize the thought of gastronomic service.

They are simple things like cutting potatoes into strips and frying them or a menu the customer could choose from.

Until then, the poor had to eat quickly and essentially, while the excellent taste only belonged to the aristocracy.

This is not historically accurate, but it is a parody of how the nobility believed superior to the common people.

A well-developed plot in a rhetorical but interesting world makes Delicious one of the most delicious movies of 2021.

Direction and actors are always the most important ingredients

I particularly enjoyed the work of Éric Besnard, who stylishly holds together many situations and characters.

The drama of revolution and poverty is present, but without necessarily becoming oppressive and over the top.

The editing of the narrative flows over time with the passage of months and seasons in a fluid mechanism that never jams.

Also, in addition to the excellent staging and period costumes, what works best is the leading and supporting cast.

On the one hand, he’d like to maintain his status as a court cook, but he’d also like to use his talents for something new and exciting.

The arrival of the beautiful (but not gorgeous, therefore believable) Isabelle Carré will completely change his way of understanding and doing his job.

Therefore, his cooking art will become democratic, admitting to his table anyone hungry according to his possibilities.

It is also fascinating the character of her son, Lorenzo Lefèbvre, an aspiring writer uninterested in becoming a cook.

His intelligence will be beneficial to putting ideas with which to build a revolutionary (in every sense) restaurant.

Finally, we have an excellent villain in the Duke, played by Benjamin Lavernhe, so rich and unfair to everyone.

He is a character uniting everyone against him, even the meek cook who just wished to serve in his kitchen.

Delicious is a movie that everyone can see and appreciate, far from the excessive arrogance of the 2021 blockbusters.

Its style humbly speaks to our basic instincts, like drinking and eating with those we love and respect daily.