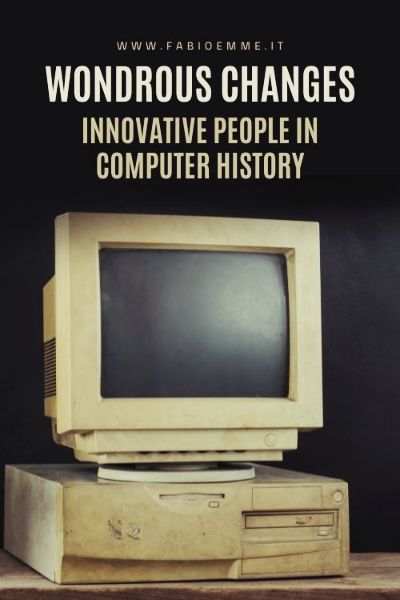 Computer history has had a few milestones, with a few men changing the rules for everyone.

Of course, we’ve come a long way from the first giant tape reels machines to modern PCs with their ultra-fast hard drives.

How many innovations have there been that really changed the game’s rules?

Today I want to focus on what I believe are three cathartic moments in the overall impact of computers on our lives.

We start with the birth of the computer during World War II as a weapon to fight the Nazis.

These electronic brains were still far from becoming as we know them, being more like huge and very fast calculators.

Then jump to the 80s with the early visionaries of how they could become mainstream usable.

Home personal computers existed back then but weren’t as intuitive and straightforward as today.

Finally, we come to the early 2000s and the birth of social networks, which forever changed the personal and work dynamics around the world.

For example, even you may have found this article through some link somewhere on the big web.

But that’s enough preamble and let’s press the big start button on today’s centerpiece, the movies we are so interested in.

We begin talking about computer with one of the most brilliant and unfortunate minds in human history, the great British mathematician Alan Turing.

It was 1940, and the Second World War was raging in all its fury, with Hitler’s devotees devastating the length and breadth of Europe.

From far away American allies tried to send ships loaded with aid, unfortunately punctually sunk by the deadly Nazi submarines.

The government put together a group of cryptanalysts to decipher the enemy’s secret communications and try to anticipate its moves.

An achievement apparently impossible since the Germans encrypted their messages through Enigma’s complex mechanism.

Turing was the chief of this group of mathematicians, then very young but already universally recognized as an indisputable genius.

Indeed, his habit of speaking bluntly and his strange attitudes made them uncomfortable.

To give the final blow to his reputation was finally his homosexuality, which at that time was even a crime for which he was arrested.

Wanting to avoid prison, he accepted the chemical castration that led him to depression and suicide in a few years.

It was a horrible epilogue for humankind’s hero who led to the Nazi army’s final defeat, along with his colleagues.

Changing the world by numbers

As the protagonist of the sad biography of Alan Turing, we have an intense and touching Benedict Cumberbatch.

Coming off the immense success of the Sherlock series and the even more famous Doctor Strange of the Avengers, the British actor does not disappoint expectations.

His performance perhaps falls short in the conclusion, running through the mathematician’s last tragic years too quickly.

Perhaps he felt closer to the machines’ cold rationality than the foolish human impulsiveness.

Nevertheless, he bequeathed to us an invention destined to revolutionize the world in all its aspects in the years to come.

Accompanying him in the enterprise is the beautiful Keira Knightley, as always at ease with costume dramas.

The star plays a woman who has to fight hard against the sexism then prevailing in order to enter the exclusively male club of mathematicians.

The woman was persistent and the most sensitive towards the strange protagonist, being close to him until the end.

Director Morten Tyldum does a good environment reconstruction about the spirit of the time and a country battered by war.

As mentioned, perhaps the final part does not do justice to the suffering suffered by Turing, although the actors do their best to make the drama.

In general, however, The Imitation Game is a biopic that I recommend, especially, to lovers of the world of computers and modern computing.

Everything has an origin in this world, and sometimes the significant changes come from the most unlikely and underrated characters.

We now move on to another important figure in computer history, namely the beloved and hated Steve Jobs.

This biopic focuses on three milestones that marked the life and career of the famous American entrepreneur.

We follow the hours leading up to the launch conferences of the Macintosh, the Next, and the Apple II presentation.

During these hectic moments, we get to know better his friends, colleagues up to a complicated relationship with his family.

We then have his personal secretary who faithfully follows him everywhere, helping him but also scolding him for his attitudes.

Very interesting then the relationship with Steve Wozniak, his closest friend and first partner with whom he entered computer history.

A relationship worsens when he conflicts with CEO John Sculley, who ends up kicking him out of Apple.

But unquestionably, his biggest headaches come from his ex-girlfriend, Chrisann Brennan.

Together they had a daughter, Lisa, who he wouldn’t acknowledge for years. Although then, oddly enough, he would name one of his computers LISA in the 1980s.

A family he loved and mistreated, passing them a few hundred dollars as maintenance despite his multi-million dollar fortune.

Just as he treated all those who worked for him ambiguously, he created an extraordinary and unique industry.

It is no coincidence that the film’s epilogue takes place during another change in computer history: the internet advent.

The yin and yang of mass informatics

Danny Boyle undoubtedly directs his best film since Trainspotting, the inimitable cult classic of the 1990s.

Plus, there is Michael Fassbender in his graceful state, simply sublime in the uncomfortable Steve Jobs role.

The picture that emerges is that of a man who is ambitious and proud beyond measure, but capable of involving everyone around him in his vision.

Despite the questionable ethics of the end-to-end policy where every Apple product only works with an Apple system, his other ideas were admirable.

His utopia of open computing for all was indeed something futuristic, albeit from the ruthless perspective of a multinational corporation.

Despite his limitations and flaws, he contributed enormously to the digital revolution at the dawn of the new millennium.

His strength gave a big push to computer consumerism with an elegant design and a system, although very limited, but clear and functional for everyone.

Equally good is Kate Winslet, faithful friend and secretary who follows him every step of the way during the film.

A stubborn and tenacious woman helps him cope and fight against his colleagues and rivals.

In addition to the excellent Jeff Daniels as Apple’s CEO, we have Seth Rogen finally in a dramatic role.

The great comedian plays Steve Wozniak, perhaps the only true friend of Jobs, who then abandoned before his success.

Summing up, their relationship is a bit that of all lovers of computer science to this man, ambiguous and controversial.

Personally, while recognizing his success, I will never admire his methods and the undemocratic and closed spirit of Apple.

Finally, let’s close on a high note with what is both the blessing and the curse of computer history: social networking.

For this topic, whose life can we follow if not that of Mark Zuckerberg?

The story starts from the end, with the famous Facebook founder surrounded by the lawyers of his friends and enemies.

We find out how the first and still biggest social network ever was born during the long and exhausting depositions.

The idea was born after a stupid joke with which the famous programmer created a site where you could give a vote to the most beautiful girls in school.

Zuckerberg was still a boy reprimanded by the school board but without severe consequences.

Then, some older (and wealthier) classmates noticed his ability by suggesting he construct a social for Harvard students.

However, he’s already pursuing a project with a friend, laying the groundwork for the future Facebook platform.

Unfortunately, money and programmers are lacking, so they turn to Sean Parker for some advice.

The famous hothead was a young entrepreneur among the creators of Napster, one of the first illegal music download systems.

While very childish and cocky, Parker finds investors putting half a million dollars into the Facebook project.

The company began to grow exponentially, while Zuckerberg started to make enemies among his friends.

By the time lawyers finally get involved, Facebook has become an Internet giant and an unstoppable money-making machine.

The world of real and fake friendships

At the helm of The Social Network, we have the great David Fincher, director of acclaimed movies like Seven and Fight Club.

For the role of Zuckerberg was chosen Jesse Eisenberg, one of the best talents among the U.S. actors on the rise.

His interpretation and the excellent screenplay tell the life of a strange and ambiguous man, but undoubtedly exceptionally peculiar.

As with Steve Jobs, we can hardly love this character without reservation.

Their genius and sense of leadership are unquestionable, as are some ethically controversial behavior.

Exactly how ambiguous all social networks are, containing the best and worst computer history has to offer.

I find it an excellent tool for maintaining personal or work contacts and perhaps bringing together old friends I haven’t heard from in a long time.

At the same time, they are our times’ worst poison, with unimaginable hate campaigns and collective stupidity.

A character at times hateful and at times hilarious, arrogant and cruel to others but equally practical and realistic in his work.

His creation, Napster, forced the music industry to change by transforming itself into services such as Spotify that we know today.

In the same way that social media, whatever you use, have changed the concept of life and privacy forever.

Many are born and disappear on the web with a handful of likes, where shame always lasts longer than success.

And while we’re at it, if you liked this article, maybe share it on your socials; I’d appreciate that courtesy.