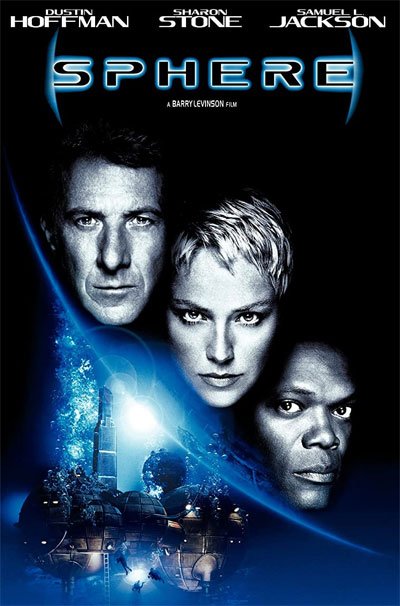 Based on the novel by Michael Crichton, Sphere is a fascinating 1998 mystery and science fiction movie.

The story begins with the military assembling a group of scientists, hastily transporting them to the middle of the ocean.

Maintaining complete secrecy, none of them can figure out why they have summoned them.

Until the commander brings them together for a briefing, showing them an extraordinary discovery.

During work to expand an intercontinental network, an unknown object slices the immense communications cables in half.

Investigating with a probe, they find a giant, half-buried spaceship on the ocean floor.

Research confirms that it crashed almost three centuries earlier, so it is likely of extraterrestrial origin.

Diving with a submarine, the group moves to a safe habitat at great depth.

Their task will be to closely study what may be the first contact with alien intelligence.

But as soon as they enter the spaceship, they find a huge sphere floating in mid-air in one of the many rooms.

Undecided about how to approach that incredible and indecipherable object, in the meantime, they can no longer return to the surface.

Indeed, a severe cyclone is sweeping over the area, making any recovery maneuver impossible.

When one of the scientists manages to get inside the sphere, what will come out is something that will upset their conceptions of science.

The object seems to give supernatural abilities to humans, making them able to manipulate reality with their minds.

But from their minds will also come out their unmentionable fears, turning the underwater shelter into a deadly hell.

Sphere was a resounding flop at the box office, resulting in one of the most unsuccessful 1998 movies.

As far as I’m concerned, I consider it one of the most original and underrated alien stories ever.

Character traits evolve compellingly, profoundly exploring their psyches and then materializing their dreams and nightmares on stage.

Therefore, we can say that the mysterious sphere is a modern reinterpretation of the myth of Pandora’s box.

Being men of science, the protagonists know they should leave it in peace, and the unknown risk is enormous.

However, temptation and curiosity will eventually prevail, unleashing the uncontrollable forces within.

Barry Levinson‘s direction has an excellent pace and visual impact, although not reaching underwater masters of cinema like James Cameron.

Kurt Wimmer‘s work on the screenplay was also remarkably good, wisely choosing what to cut from Crichton’s immense work.

Certainly, the production had to cut several scenes and situations, but the essence and the salient moments of the story do not lose their strength.

As a result, 1998’s Sphere succeeds in capturing the meaning of the novel in slightly more than a two-hour movie.

So, if you’ll pardon the irony, let’s fish out this little gem of cinema and shine it properly because it still shines so bright.

A cast of stars in Jules Verne’s shadow

An excellent cast plays the quartet of scientists in this superb underwater adventure.

Leading the group is Dustin Hoffman, stern but also funny in the psychologist’s role.

Although he initially seems almost useless, he will be fundamental in fighting the creatures that will emerge from the protagonists’ subconscious.

Sharon Stone is a biologist, an emotionally fragile woman, but highly determined to impose her reasons.

Her traumatic past will be one of the worst risks for the ghosts of her pain, especially when she also enters the sphere.

On the other hand, Samuel L Jackson is a mathematician as wise than haughty and arrogant with an unbearable attitude.

However, his opinion is always of great interest, often being the first to solve the most challenging problems.

Closing the poker of scientists is the exuberant Liev Schreiber, a young man in search of glory but perhaps too naive and optimistic.

However, his tenacity in continuing the research involves the others, especially when everyone would like to abandon it.

The consistently excellent Peter Coyote is the treacherous army commander, totally disinterested in science and glory.

Not surprisingly, as a soldier, his first thought is only to find new weapons and technologies to add to the American arsenal.

In conclusion, I also recommend reading the original novel by the late brilliant Michael Crichton.

Sphere is a fantastic and timeless story, clearly inspired by the masterpieces of Jules Verne, as we also see in this 1998 movie.

So do not hesitate to click on the link below and enjoy it comfortably streaming at home; you will discover an adventure that will not disappoint you.