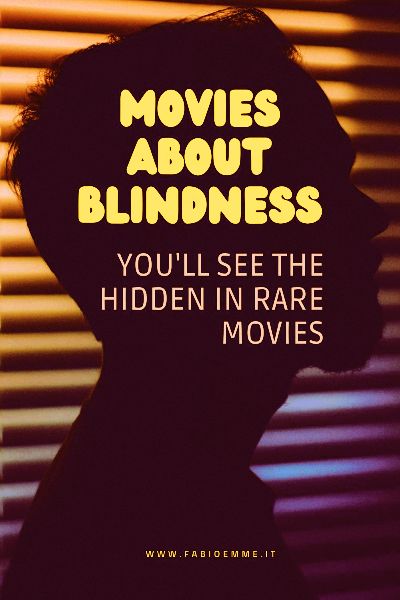 Sometimes, they are even superheroes, such as Marvel’s famous Daredevil.

How many ways is it possible to exploit this topic within a story?

I remember as a boy reading The Country of the Blind, a story by the famous sci-fi writer H. G. Wells.

The main character was a man who happened to end up in a town isolated from the world where no one could see.

Trying to learn their lifestyle and eventually join their community, he escaped to prevent them from gouging out his eyes.

Likewise, we watch the protagonists of today’s movies from afar, who are different but equal in their state of blindness.

So let’s put on our cool Ray Charles-like dark glasses, smiling amiably like him as the show begins.

Today’s first protagonist is the late Rutger Hauer, one of my favorite actors among the great myths of cinema.

In this movie, he plays a soldier losing his sight when being struck by a grenade in a Vietnam battle.

Having to retreat in a hurry, his fellow soldiers leave him in the field and give him up for missing in action.

Luckily for him, however, some Vietnamese farmers find him and welcome him into their village.

Initially discouraged, he finds new self-confidence when he meets a skilled swordsman who trains him to fight despite his blindness.

Years later, he returns home looking for an old friend who had abandoned him by fleeing during the attack.

He then goes to his home to meet him but discovers he has left his family to live in Las Vegas.

While talking to his wife and son, some criminals break in trying to kidnap them.

Indeed, his friend is in debt to some loan sharks who want to force him to produce a new type of synthetic drug.

So he decides to accompany his son to Las Vegas after he, unfortunately, fails to save his mother.

The trip will be very long and challenging since the kid can’t stand it and the criminals are after them.

Yet with his skill and trusty sword hidden in his walking stick, he is ready for whatever happens.

Already an international star after Blade Runner and The Hitcher, Rutger Hauer offers one of his funniest performances ever.

Summing up in one sentence this movie by Phillip Noyce, we could say that it is a blindness condition advertisement on steroids.

The director wisely makes the most of the titanic actor by focusing on his sympathy and charisma.

Also, his good cinematic craft, already seen in movies like Dead Calm, holds together a plot otherwise quite improbable.

The great Hauer helps him a lot, doing very well in the action scenes, skillfully handling his sword against dozens of enemies.

At his side, we then have Terry O’Quinn, whose career was on the decline but would later return to success with the famous TV series Lost.

In this case, this role puts him partially on the sidelines, but the actor does his part with dignity when he is on stage.

Indeed, the actual comic sidekick is the little Brandon Call, a young promise, unfortunately, then quickly disappeared after a few films.

His duets with the protagonist are simply irresistible, resulting in the inevitable friendship during the long trip to Las Vegas.

Also of note is the cruel henchman played by Nick Cassavetes, who would later become the director of excellent movies like John Q.

Finally, to fight the blind Zorro, we will also have Shō Kosugi, a historical swordsman of the oriental cinema, for a fantastic concluding duel.

In short, Blind Fury is a small cult movie of blindness 80s that stands the test of time and is suitable for all generations of audiences.

After the little epic of the blind superhero, we move on to a disturbing movie of collective blindness.

We’re in an unspecified city in South America when a man in traffic in his car starts screaming.

But his screams aren’t from pain, as much as they are from the fact that he suddenly can’t see anymore.

Slowly the epidemic spreads across the nation and then around the world.

Every analysis by doctors seems futile, as the eyes of the infected seem to have no problem.

When a well-known politician goes blind on live TV during a session in parliament, panic spreads without control.

In this context, a young doctor becomes infected and goes to the hospital to receive treatment.

But when they realize they cannot stop the contagion, the terrified authorities forcefully confine the sick to isolation centers.

One of the few miraculously unaffected by this blindness, the doctor’s wife decides to stay with him by being locked up.

Unaware of what is happening outside and without any help inside, the situation among the patients immediately deteriorates.

The strongest take command and begin to exploit the weakest in every way possible and imaginable.

Strong in their possession of guns and now delirious of their power, they also demand sexual favors from women.

As food becomes scarce and the isolation center becomes a dunghill, only hope for survival becomes escaping from that hell.

A prophetic epidemic about reason blindness

Blindness is a prophetic movie in 2008, given the global pandemic suffered in recent years.

Cinematographically, the idea that the eyes of the sick are affected by a dazzling white is very apt.

It is a choice giving the feeling of being lost and alone, rather than the more canonical horror movie darkness.

The protagonists are a perfect couple, through whose everyday lives we follow the distressing evolution of the epidemic.

Mark Ruffalo, still far from becoming the angry Hulk of the Avengers, is the chain that drags down even his wife.

The rank of the respected doctor is no longer worth anything once society’s rules and usual conventions have collapsed.

As long as she doesn’t abandon him, the beautiful and talented Julianne Moore persists in descending into the infected circle along with him.

Without a doubt, the extraordinary actress is the best aspect of the film, with an intense, suffering, and passionate interpretation.

Sadly, the acclaimed author of the great Brazilian cult film City of God will work for television after this movie.

Of course, even the various producers of the majors must have become blind not to see such a pure talent going to waste unnecessarily.

We all admire his work, hoping that he will soon return to theaters as far as we are concerned.

After a fun action and a disturbing health drama, we now come to a movie where blindness takes on a horror thriller tone.

The story begins with three friends, two boys and a girl, who lives on petty theft and robbery.

Wishing to make a big score and raise a lot of money, they target an isolated house in the suburbs.

It is a house where an elderly retired military man lives alone in blindness after a combat injury.

The man is well-known in the neighborhood because his daughter, several years earlier, died in a terrible accident.

However, rumors spread that he received substantial compensation for the tragedy and kept all that nice cash hidden in his house somewhere.

The trio of scoundrels quietly infiltrates during the night, scouring room by room for the precious loot.

But even though he is blind, the old soldier hears just fine and notices the intruders by reacting violently.

Despite his handicap, the man is still an extremely effective soldier and has no fear of confronting them.

At that point, the three friends find themselves trapped, forced into absolute silence not to alert this deadly killing machine.

When they descend into the basement to find a haven, they make a terrifying discovery that will ultimately change everything.

Director Fede Alvarez had debuted in theaters with the controversial and much-hated remake of Evil Dead.

Although light-years away from Sam Raimi‘s masterpiece with Bruce Campbell, it was a decent horror with good narrative ideas.

In this case, free to write without starting from a pre-existing subject; it is much more original and intriguing.

So instead of focusing on the violence and bloodshed of his first film, he turns more wisely towards the thriller full of fear and tension.

This time, Stephen Lang, already famous as the villainous colonel in Avatar, becomes an impaired but equally fearsome adversary.

His blindness, indeed, is the hinge around which all the ideas of this movie revolve.

Every scene lives on the silence the unfortunate thieves are afraid to break, transforming their every breath into the soundtrack.

Dylan Minnette and Daniel Zovatto alternate well in the braggart and the shy roles, but the best is the young Jane Levy.

The actress had already been the protagonist of the remake of Evil Dead, with a no shame and no praise performance.

With a slower and more exasperating pace in this movie, we can finally better appreciate her skill.

Indeed, she will be the tenacious antagonist who doesn’t give up, significantly when the fight shifts more to the struggle between man and woman in the finale.

We have an excellent thriller with few characters and a dark and claustrophobic location.

Not surprisingly, Don’t Breathe will then have a concluding sequel in 2021, which will conclude this singular double film about warrior blindness.

Please read my article about them for anyone interested in learning more about these two movies.