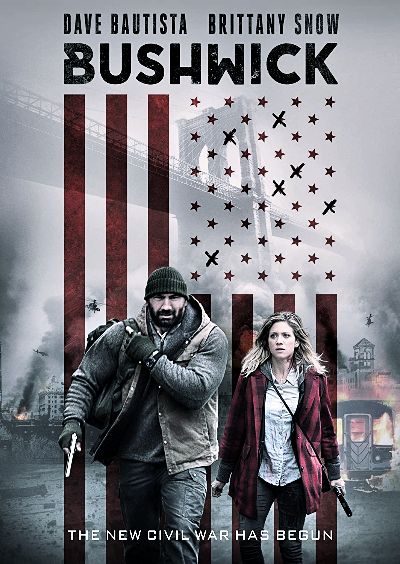 Bushwick is a 2017 action movie set entirely in the New York City neighborhood of the same name.

The story begins with a day that seems like any other for two lovers exiting the subway.

But something is strange, as the place is shrouded in a strange and unusual silence.

Suddenly, a man on fire runs screaming towards them, chased by a group of soldiers trying to kill everyone.

Miraculously saving herself, the girl takes refuge in the house of a former military doctor, who now works as a humble janitor.

After the initial attack, the mysterious enemy rakes every house, so they must quickly escape.

Desperately trying to find the girl’s mother and sister, they realize that there is nowhere safe left in the city.

Indeed, when they get one of these soldiers to confess, they realize that they are just mercenaries.

Some political groups hired them, who started a war to secede some states from the USA.

These mercenaries have orders to create disorder and take hostages, waiting for further instructions.

In this way, the secessionists hoped to push the President and Congress to make their independence official.

Their plan, however, quickly went awry, and now the ailing military is killing civilians without mercy.

At that point, the citizens of New York gather in an army in search of weapons to escape the burning city.

Bushwick is a pulse-pounding movie with great cinematic technique in the service of an evocative but straightforward plot.

The entire story cuts into large blocks that follow the characters without any editing breaks.

These blocks come together with some clever and well-hidden tricks to give the feeling of a continuous narrative flow.

The result is total identification with the protagonists in their odyssey through a devastated city.

As well as being spectacular, urban guerrilla warfare is also realistic and believable.

Indeed, some delirious scenes have rabbis armed with Molotov cocktails or young motorcyclists running with baseball bats against black-clad mercenaries.

The everyday scenery of the city and its peculiar inhabitants become an arena without rules where everyone tries to survive in his way.

I enjoyed the action scenes, spectacular in direction yet not impossibly over-the-top to become silly.

I’ve read several reviews from established critics who mercilessly panned this movie regarding the plot.

Instead, I think the story is essential and functional, raising the old secessionist theme dear to hard-core Americans.

It is no coincidence that it is a political topic that occasionally returns and always attracts the attention of nostalgic of supposed ideals disappeared.

In this movie, we see only the poor people of Bushwick, for better or for worse, fighting for their lives beyond the political agendas.

In New York City, anything can happen

The former wrestler plays someone who doesn’t thrill under fire but retired sick of seeing people die.

His sad past makes him a closed and lonely man, determined to reach out to a family we’ll learn more about in the finale.

In contrast, the Nip/Tuck actress is an open and confident girl, as opposed to the role of a convinced Nazi she played in the series.

Although upset by the events, her first thought goes to her family and involves in her research also her grumpy fellow adventurer.

As mentioned, the protagonists are involved in numerous action scenes while remaining within the limits of humans without becoming invincible warriors.

Facing enemies together on the streets of Bushwick, a group of friendly neighborhood criminals will help them later in the movie.

Together they organize a riot, arming the crowd to lay siege to the only park in the city from which it is possible to escape by helicopter.

A pair of talented directors ignored by the majors

Jonathan Milott and Cary Murnion direct their second film after the interesting Cooties, a 2014 action horror.

They confirm a great talent in staging, along with the ability to keep the pace and tension high.

Making extended sequence plans for their action scenes resembles that of the most famous John Wick films.

A technique adopted not by chance, useful to better understand what happens on screen and emphasize the skill of stuntmen.

Each of these scenes requires excellent organization and precision in coordinating the cast with the technicians of the crew.

Directing becomes essential to give an identity to a film; otherwise, reduce it to continuous breaks like an MTV clip.

It’s still virtually unknown to the masses today, despite being one of the best heart-pounding films of recent years.

So let’s combine that with notoriety, talking about it and hoping that these two fine filmmakers will find another production to surprise us even further.

Personally, I wish more such action would crowd theaters rather than lame blockbusters like Spider-Man: No Way Home.