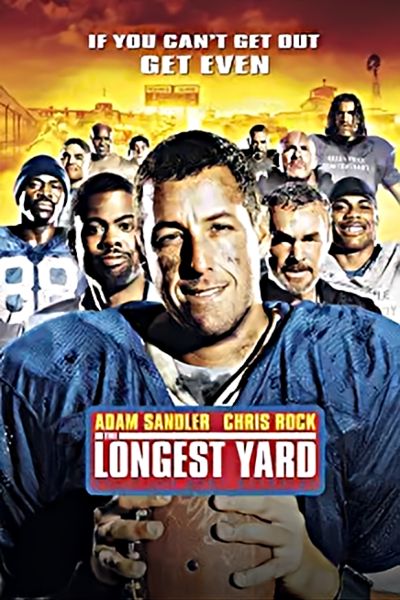 Taking off from the famous 1974 The Longest Yard, in 2005, MTV produced a homonymous movie starring Adam Sandler.

As in the original, the main character is a famous football star whose career is declining.

After becoming embroiled in a sports betting scandal, the quarterback has never returned to his performance levels.

Until one night, leaving home drunk after an argument with his boring girlfriend, he has an accident and is arrested by the police on live TV.

The authorities punish him severely by sending him to one of the toughest jails in the entire nation.

Unfortunately, the warden is a big football fan and wants him to help improve the guards’ team.

Initially, he refuses, but he soon realizes that he’ll have a tough time if he doesn’t.

So he proposes to organize a friendly game against some of the prisoners to boost his players’ morale.

Many immediately join the team, excited by the idea of being able to beat the guards freely.

But those who could be the best players instead refuse, not trusting the quarter back’s habit of selling his games.

While trying to train the scarce athletes at his disposal, the prison staff try hard to get in his way.

As he becomes friends with these inmates, however, he too begins to want to teach the guards a hard lesson.

However, the warden plays dirty and won’t hesitate to kill one of his friends to make sure he wins.

Getting the opposite effect, they will all be united against the common enemy to play the game of a lifetime.

Incomparable to 1974, but still fun

As a great success of 2005, The Longest Yard is a middle ground between remake and sequel/parody of the 1974 movie of the same name.

I wouldn’t even hazard a comparison, given the immense difference between the two directors at the project’s helm.

Robert Aldrich, in his career, has contributed significantly to the evolution of the cinema, establishing paths that others have followed.

His filmography speaks for itself, ranging from different genres such as crime, drama, westerns, or psychological thrillers.

To name just one, I could mention The Dirty Dozen, one of the best war movies in the history of cinema.

On the other hand, Peter Segal is an honest worker serving many productions, in typical modern forsaken videoclips editing.

We can easily define him as interchangeable with many similar directors, who often make funny but rarely genuinely memorable films.

His comedies are usually delightful, but the one I really remember is only Anger Management of all of them.

It was another movie where protagonist was officially Adam Sandler, but the story’s wild soul was the excellent Jack Nicholson.

In this case, we have a loosely fitting homage but still an effective slapstick from the movie with Burt Reynolds.

The old actor also returns, becoming the coach of the football team of these crazy criminals.

So let’s not look for improbable comparisons between The Longest Yard from the 1970s and a simple entertainment movie from 2005.

It fulfills the task perfectly, far from being a masterpiece, but maybe enticing some to know the 1974 cult original.

Touchdown at the worldwide box office

Perhaps with few ideas, Peter Segal carries on his type of filmmaking, but still adequate for the general public.

It is not by chance that The Longest Yard has obtained an excellent result, and the movie grossed almost 200 million dollars worldwide in 2005.

Rather than imitating Burt Reynolds, Adam Sandler seems to repeat the quarterback he had already played in The Waterboy.

In that case, however, the genuine stupidity of the character and the general atmosphere managed to affect better comically.

However, the star always does his job with dignity, resulting in credibility on the playing field.

In addition to the already mentioned and iconic Reynolds, there is the friendly handyman Chris Rock to assist him.

The famous American comedian always cracks a smile with his machine-gun talk that makes fun of everything and everyone.

In the role of the clandestine prison stuff finder, with due distance, we can compare him to the legendary Morgan Freeman of The Shawshank Redemption.

The other team members share the various roles as likable convicts, perhaps too much so with no one truly evil.

I would put the gigantic Terry Crews, McDonald’s official dealer, inside the prison out of all of them.

In addition to 1974 original, this film also has 2001’s hilarious Mean Machine as a reference.

Also referenced by the players’ t-shirts, the film had the same idea as the basis but to was centered around soccer with the violent Vinnie Jones as the main character.

I will repeat that you should take The Longest Yard for what it is, entertainment, and as such, it deserves its excellent 2005 box office.

If in addition, it makes you want to discover the 1974 original or other films by the great Robert Aldrich, all the better for it.

For all those who wish to know the original of 1974

Once Upon a Time in Hollywood...