Copshop – A No Way Challenge Between Lunatic Killers 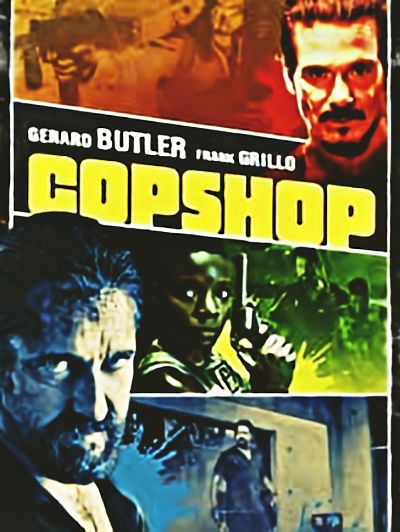 The story begins with what seems like a quiet night in a small, remote Nevada police station.

Responding to a call, a young girl officer arrests a suspect after he assaults her in the middle of the street.

Without knowing his identity, she and her partner take him back to the station and lock him in a cell.

They may not know it yet, but this arrest will mark the death sentence of almost all of their colleagues.

Indeed this man is a criminal on the run who frames his cronies by selling information to the FBI.

There’s a bounty on him that all the scum would like to collect, even one of his old assassin friends.

He also gets himself arrested by pretending to be drunk, putting himself in the cell next to his target.

However, when another suitor for the bounty shows up at the station, the situation immediately deteriorates.

The latter is a different kind of hitman, who wipes out most cops before they realize what’s happening.

But the young girl survives and, although seriously injured, locks herself in the cells along with the two suspects.

A siege begins to try to get in, while inside the cells, the two criminals dream of killing each other.

Locked up amid all this hatred and violence, she must endure through that endless night of madness.

Are the characters better than the overall plot?

Joe Carnahan demonstrates, as usual, to give a good rhythm to what, let’s say, is a weak plot.

Nevertheless, the director keeps the tension high until the end, sticking an after-finale with a chase, maybe for a possible sequel.

Among his works, I preferred Boss Level of 2020 on Copshop of 2021, finding it a much more direct and openly humorous movie.

In trying to be more serious, it offers some excellent thriller moments of tension and expectation.

Mainly when the protagonists are trapped in cells, both the director and the actors are at their best.

Also, on the other side of the door, what happens between the crazed killer and the traitorous cop has good moments of fear and violence.

In my opinion, however, it almost seems that the director did not manage very well to mix all these characters.

Their stories intersect in a somewhat contrived way, although taken individually are pretty interesting.

Especially their personal interactions are not very understandable, although the main plot works very well.

In any case, we do justice to the work of the director who creates a good entertainment product with a great overall atmosphere.

So maybe let’s gloss over some holes or forcing of the script, over some physically and biologically impossible situations.

Let’s enjoy the best that offers this show, appreciating the intensity of the dialogues and the action scenes for a good hour and forty minutes of its duration.

Despite the two famous male stars of Copshop, who I liked the most in this 2021 movie is the young Alexis Louder.

Her character is extremely strong and confident, brought to the stage with a very charismatic performance.

However, the actress successfully expresses the insecurity of someone being too young to deal with two such dangerous criminals.

Let’s hope well for the continuation of her career after this solid display of badass acting and some great action scenes towards the conclusion.

I usually like Frank Grillo a lot, but this time his character of evil/good and hero/antihero did not convince me.

As said, it’s maybe not even the actor’s fault, but his flashback story is a bit confusing, though quite interesting.

Instead, it is much better for Gerard Butler as a hitman who is openly cruel and uncompromising.

Although he seems the most ruthless, he would ultimately be the only criminal with a moral code.

Finally we mention the excellent Toby Huss, certainly the most disturbing and perhaps deserved more depth and space.

The actor really seems to enjoy the role of a psychopathic butcher, giving a hard time to all the others.

In summary we have a great cast that forms an ecosystem of attractive characters that fill well some of the story’s shortcomings.

Personally, I enjoyed it a lot, but it honestly didn’t leave me wanting to watch it much more.

Regardless, in today’s 2021 anemic landscape of action movies, Copshop definitely remains another thumbs up for
Joe Carnahan.

You can clearly see that this is a lot of fun for the director and a clear homage to John Carpenter‘s legendary Assault on Precinct 13.