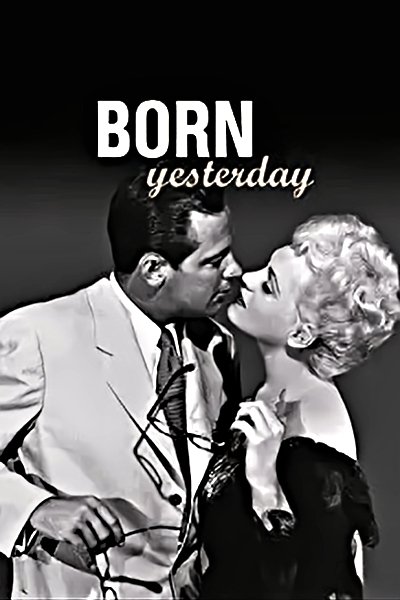 Born Yesterday is a cult movie from the 1950s, easily one of the best rom-com ever, starring a stunning Judy Holliday.

It’s the story of an arrogant businessman who comes to Washington to pass a landmark bill for his factories.

To discreetly carry out his work, he rents out an entire floor of a luxury hotel while he stays there.

Along with him are his loyal henchmen, accountants, lawyers, and his young and inseparable mistress.

She is basically good and kind yet appears ignorant and vulgar when dealing with some local aristocracies.

So the businessman decides to hire an ambitious journalist to educate and perfect her behavior.

Unfortunately, the girl will wake up more than he intended, finding a new interest in reading, culture, and art.

Owning half the estate as a silent partner, she will become a sudden danger to disarm at any cost.

At first rejecting the girl’s advances, the journalist falls in love with her, powerfully enchanted by the transformation.

Moreover, he despises the criminal methods of the businessman, wishing to denounce him by writing an article.

This love awakens her desire to be free and independent, for the first time craving a life of her own.

Therefore, she decides to confront her overbearing partner, showing an intelligence that no one was expecting.

At the same time, the loving couple will try to prevent politicians’ corruption for the businessman’s millionaire projects.

However, he is an arrogant, tough guy who will not let them knock him off without fighting until the end.

When time crystallizes a masterpiece forever

Born Yesterday is a movie that will never get old with a structure effective in 1950 as it is today.

It’s a universal story for young and old, dealing with universal themes such as love, culture, and respect for others and oneself.

All this mixes criticism of the business and political world, where ideals become sellout to the highest bidder.

The metamorphosis of the beautiful Judy Holliday, who becomes a refined and intelligent woman, is mesmerizing with every passing minute.

Her naive smile struggles daily against her partner’s money and coarse manners, who is just as ignorant but cunningly smarter.

Despite the enormous cultural gap since the 1950s, even today, younger people will appreciate a rom-com like this.

The humor of the dialogue travels through time without losing its power in a story with a great entertainment rhythm.

Although years pass and generations change, some things remain the same with the passage of decades.

Who among us has never had to deal with a boss or a superior who is always arrogant never pays for his behavior?

Here, we finally get to see a likable blowhard get paid back in the same coin he dispenses to others every day.

The lightheartedness and passion of the two lovers are stronger than the contempt of those who think themselves superior for money.

In essence, this is the classic struggle of good versus evil, where love becomes a greater struggle for justice.

For once, I’m sure, we all like to see evil and corruption defeated and ridiculed, at least in a movie.

George Cukor was one of the most famous and prolific names in the Hollywood industry.

The director made more than 60 films until the 1980s, many of which have remained indelible in film history.

Personally, Born Yesterday is my favorite one, being practically a perfect and unassailable movie.

A 1950s tale that is effective with simplicity, with a great Broderick Crawford as the villain hated and feared by all.

He’s a character we all love to hate, as an evil and ignorant master used to dominate everyone else’s life.

Hasty to anyone, he always covers his nastiness with the bitter compensation of money that he never seems to lack.

But by underestimating his partner Judy Holliday, he will make the biggest mistake of his life.

The actress wins an Oscar, with a character that will perhaps become repetitive in subsequent films.

An uninhibited former stripper, this role will be the highest point of her career, tragically ended shortly after 40.

On the other hand, William Holden is in a more severe and politically committed role while remaining the usual heartbreaker.

Basically, the charming actor is the kindly nemesis of the shrewd wealthy businessman, who initially underestimates him as well.

Indeed he almost accepts without paying attention to the casual, quick kiss the girl steals from him on the first night.

But the desire to free her becomes irrepressible, leading to the hilarious and memorable final confrontation.

The director conducts this orchestra of actors with a great sense of timing, always setting the right pace for each scene.

In conclusion, we can say that Born Yesterday is almost a movie instruction manual for aspiring comedy writers.

It is a marvelous 1950’s theatrical setup, shining with splendor today as it did the first day it appeared in theaters.

Bullitt – An Outstanding Cop In A Famous Old Crime Movie