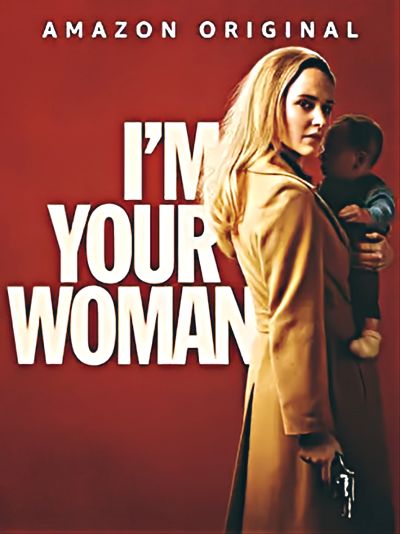 I’m Your Woman is a movie about a dangerous criminal’s wife during the 1970s.

Ever since they met and started living together, he has been providing for everything.

She accepts her man’s long absences and sudden returns in exchange for a comfortable home and money.

Also, because she can’t have children, he brings her a newborn baby to raise as her own one day.

However, everything changes suddenly when one of his accomplices arrives in the middle of the night, telling her to run away.

Indeed, her man just killed a prominent gang leader, and all other criminals are hot on his trail.

Having never lived alone, she is confused and scared, although a mysterious man helps her escape out of town.

He is an old friend of her husband, to whom he owed a favor he cannot refuse for a long time.

The woman has nothing outside of the clothes on her back, a bag full of money, and her son.

Going to a new city, she must then start life from scratch again, without making friends or talking to anyone.

However, staying in complete isolation is not possible, and when she befriends her elderly neighbor, everything falls apart.

A group of criminals soon arrives trying to kidnap her to get to her husband, yet the mysterious friend helps her escape again.

At that point, they decide she must move to an old cabin in the woods, miles away from anything.

But even then, she will never be truly safe, so if she wants a real life for her and her son, she will eventually have to fight.

One baby to rule them all

What happens when a woman discovers what is hiding behind her man’s life?

The originality of I’m Your Woman is to make protagonists who in other crime movies are siding characters.

We are talking about characters such as the boss’s woman, usually proper only to increase the masculinity of the main protagonist.

However, these roles often star excellent actresses, such as Michelle Pfeiffer in Scarface, just to name one of my favorites.

In this case, the woman is initially submissive to that life, accepting without protest the choices of her criminal partner.

But when he unleashes a war, she must drop her apathy and learn to live in a violent world she never knew.

Mothering not by choice but with a baby that her man literally places in her hands, that tiny life is still her responsibility.

Being on the run for much of the story, at one point, she decides to put her foot down and fight for her family.

This family is of people she didn’t choose, but with whom she finds herself hanging on, hiding to survive.

Her son is the fulcrum around which everyone unites, putting aside their differences in one way or another.

Somehow this child, still pure and innocent, is the symbol of hope for a different future for all of them.

I’m Your Woman is not a movie for everyone, with a gentle rhythm telling a story more human than criminal.

So if you’re looking for non-stop shootouts and over-the-top characters, be warned that you won’t find any here.

Violent but also feminine and maternal

Rachel Brosnahan is a most unusual leading lady, pretty but not beautiful, passive and intense acting.

As mentioned, many actresses played the boss’s woman, but rarely as the main character in the story.

Her performance makes convincing the criminal odyssey of this mother whose life changes forever overnight.

Highly fascinated by a violent and very feminine script, the actress also wanted to produce this movie.

Helping on her journey is Arinzé Kene, appearing at her door almost like another husband’s accomplice.

Although he talks quite a little, the actor hides a sad plot of his own behind a seemingly impassive tough guy face.

However, his problems and his wife, Marsha Stephanie Blake, will inevitably merge with the protagonist.

Although we see them rarely together, they make a tremendous former criminal couple back in a world they thought they had left behind.

The young Julia Hart confirms to be an appealing filmmaker worth keeping an eye on.

After the intriguing Fast Color and Stargirl, I’m Your Woman is her most well-rounded movie so far.

In short, her filmography is not so large but includes in every situation movies of an uncommon refinement.

Once again, we can see how an idea of an already existing plot could become something else.

Although the idea of criminals on the run is certainly not original, the different perspective makes everything new and original.

Therefore, let’s appreciate feminine and maternal crime movie, where for once, family and love are more important than violence and bullets.