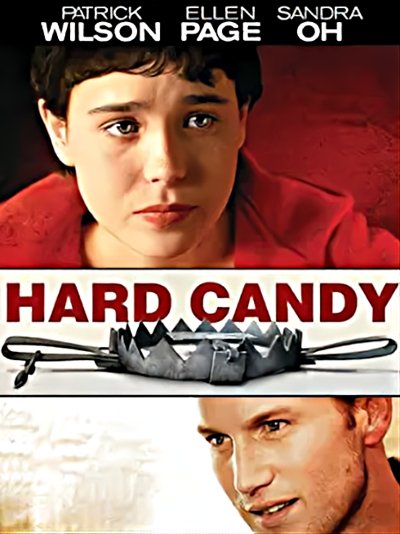 Hard Candy is one of young Elliot Page‘s first movies in 2005, before becoming an international star with Juno.

The story is about an uncomfortable romantic date between a 14-year-old girl and a charming adult.

After conversing for a long time in chat rooms, they decide to meet in person at a small restaurant.

While seemingly joyful and innocent, the little girl actually seems much smarter than she looks.

Apparently fascinated by the man’s talk about his photographer career, she wishes to visit his home and admires his pictures.

As soon as they arrive, the two chat about the lives of these models over drinks together.

But all of a sudden, the man loses consciousness and wakes up tied to a chair.

Indeed, she put a narcotic in his cocktail, and as he is immobilized, she finally reveals her plan.

She is absolutely sure that he is a dangerous pedophile, a predator who lures his victims online.

She also believes he is responsible for the disappearance of a close friend of hers a while back.

Of course, the man denies any accusation, trying to convince the girl that she has caught the wrong person.

However, his arguments do not affect and do not shake her confidence at all.

Turning his house upside down, she wants to frame him by looking for compromising photos and evidence.

What she really wants is for him to admit his guilt, otherwise threatening to maim him physically.

She ruthlessly carries out her plan with an entire weekend ahead of them until an extreme final choice.

Hard Candy is a 2005 low-budget movie with a highly appreciable final result.

The screenplay deals with a not easy theme like pedophilia, inserting it in a one-on-one chamber thriller.

The idea may be comparable to the classic The Last House on the Left, a masterpiece of the late Wes Craven.

However, the unfolding goes for refined psychological violence rather than the bloody slasher of 1972.

In this rape and revenge, indeed, we have a deadly duel where we fight with words, hidden truths, and lies.

Stripping the man of his confidence, this little girl confronts him with the weakness of his bullying.

One by one, together, they examine his life’s mistakes, regrets, and lost friends and loves.

However, pity is a luxury the girl cannot afford, leaving the pedophile with one last dramatic choice.

The first hour is absolutely perfect, a seesaw of emotions and suspense that fits perfectly with the thriller.

Perhaps in the last half hour, too many twists and turns happen, one after the other.

Let’s be clear, nothing far-fetched happens that irretrievably ruins the overall experience.

What I meant was that the various plot twists could, perhaps, be better distributed previously.

However, as I said initially, the final result is hugely satisfying, making Hard Candy one of the most intelligent and unknown movies of 2005.

Elliot Page, though very young, proves to be ideally at ease as the absolute protagonist.

Her transmutation from an adorable little girl to a disturbing psychopath is a remarkable and believable performance.

For sure, the character is this movie’s highlight, always surprising without ever knowing what to expect from her.

She is a sadistic little red riding hood (see also the color of Page’s clothing) who this time puts the big bad wolf in check.

And yet she is also, in a sense, a story weakness, detracting a comparison that is overly unequal from the start.

Indeed, wanting to criticize director David Slade, perhaps this little avenger is even too strong in the end.

Patrick Wilson plays the unpleasant role of the pedophile with dignity but never offers a real challenge to the little protagonist.

Inside this plot, this actor’s talent could have emerged much better, possibly balancing the dialogues and strong positions as well.

Sometimes the little girl’s monologues get a little too long, and some reciprocal interaction would have made the plot more intriguing.

However, I want to clarify that we are talking about a brave and well-constructed movie with Hard Candy.

The director does an excellent job of keeping the suspense high until the very last second.

The idea of punishment does not obscure the psychological depth of the characters, who always remain a bit mysterious.

Everything takes place with an almost theatrical idea of staging, although not disdaining fascinating camera movements.

Personally, I didn’t know this movie until recently, so I try to make up for it by recommending it to as many people as possible.

If you don’t want to miss out on a very unique and compelling story, maybe you could do the same.