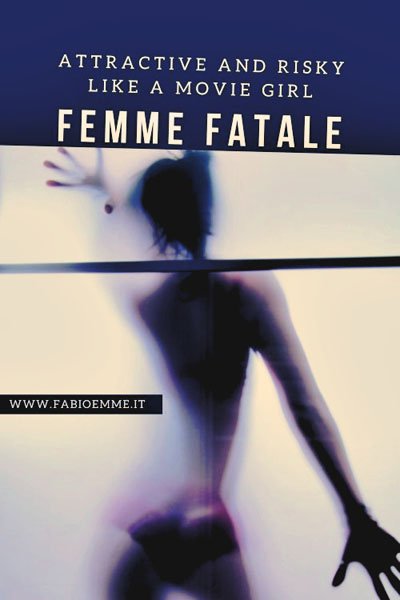 Magnificent and lethal living weapons, the Femme Fatale are the sirens of movies, bewitching naive sailors and then mercilessly drowning them with their charm.

In front of them, the men remain silent and trembling with desire, while the other women foam with anger and envy.

Nothing in life is beyond their reach, and when they frame a target in their telescopic sights, rest assured they never miss.

These beauties don’t really care about money or sex, but it’s all about power.

From noir’s origins in the 1930s to modern, sexy thrillers, how many have passed through cinema’s long and prolific history?

Today, we have three magnificent examples of Femme Fatale in some movies that are still relatively recent to brighten up our day.

I have purposely chosen three titles that the public and the critics have not treated very well, but they have deserved the praise of your humble undersigned.

So we watch these beautiful creatures closely, always careful to look away before they petrify us like dear Medusa.

A brutal murder shakes the quiet in uptown San Francisco.

In a wealthy, isolated suburban home, police find the body of one of the city’s most influential and important men.

The victim was found naked and bound to a wall, butchered by a valuable antique ax.

Embarrassment grows when the investigation reveals that the place was actually hosting lavish sex and drug receptions.

A promising young detective takes the case, which could be the ultimate launching pad for his career.

Unfortunately, while examining the crime scene with his men, he finds some compromising photographs and films inside a safe.

They could ruin the reputations of several prominent figures in the city, including the current powerful and vindictive governor.

In addition, the detective finds the fingerprints of a well-known psychologist on the murder weapon, which is the wife of a close friend of the detective.

Having always had a soft spot for this charming and intelligent woman, he is embarrassed to have to interrogate her.

At the same time, he begins to fear for his life, especially when someone tampers with his car and risks causing a fatal accident.

Then the cop realizes that the mighty men of the city will do anything to get the investigation done.

To save his skin and, if possible, his career, the detective must solve the riddle against virtually the entire city.

A dirty triangle of class, love and death

Jade is a high-tension story of sex and power by a master filmmaker like William Friedkin.

The femme fatale is Linda Fiorentino, a beautiful Italian-American of great success in Hollywood.

An actress intense and dramatic but also ironic in comic films like Men In Black or Dogma.

Since the new millennium, unfortunately for her admirers, she will give up acting to devote entirely to the production role.

Although she is a secondary character, all the events revolve around her, whether she is present on stage or not.

The two leading characters fighting for her are the classic friend/enemy growing up together and split by their careers.

David Caruso plays the good cop, or at most as good a cop can be for a director like Friedkin.

A familiar face to all CSI Miami fans, the actor passionately delivers a performance of stubborn tenacity against all odds.

Simply phenomenal is his hidden enemy, the criminal lawyer who apparently is his friend, Chazz Palminteri.

The big Oscar-winning star for The Usual Suspects plays an ambiguous, cruel, violent, and ruthless towards the whole world.

Even his love for the beautiful Fiorentino has something sick and insane about it, almost as if she were more of a trophy to possess than a woman to protect.

The screenplay slides like a blade between the ribs aiming straight at heart in this ecosystem of great wealth, power, and corruption.

I have read many opinions, even from renowned critics, who consider Jade a minor and limp film in William Friedkin‘s filmography.

For me, it concludes an excellent crime trilogy along with The French Connection and To Live and Die in LA.

Therefore, the actual crime would be to have never seen it, just as the real delict for many was not to appreciate its real value.

From San Francisco, we fly into the heart of the class and style of France, directed by the superb Brian De Palma.

This story begins with the theft of diamonds during the famous film event of the Cannes Film Festival.

Unfortunately for the thieves, the heist ends in tragedy, and only one girl in the gang manages to save herself.

While fleeing, she meets an influential politician who falls in love and marries her, thus living in the United States.

However, many years later, the man is appointed ambassador, and the beautiful thief must return to live in Paris.

Fearing that some of her old accomplices may want revenge, she tries to live as anonymously and confidentially as possible.

Unfortunately, a young and ambitious paparazzo manages to photograph her, selling her shots to a famous gossip magazine.

One of the Cannes robbery thieves then returns to the city after serving a long sentence in prison.

Therefore, he begins to hunt her down, incapable of forgetting the woman’s betrayal, who fled with the rich booty, leaving him for the cops.

The photographer begins to follow her in the shadows among the clubs of Paris, figuring out he has triggered worse trouble than he could have imagined.

However, the wily thief is tricking and manipulating him to escape from that dead-end of deceit and crime finally.

Indeed, the woman wants only to gain her freedom again, away from the ambassador and the dangerous Parisian underworld.

Femme Fatale is probably one of the most underrated movies of Brian De Palma‘s long filmography.

Many have criticized the complexity of a plot that is not easy to understand, mistakenly branding it as brainy and inconclusive.

Instead, the director’s trademark is evident in every elegant shot and virtuoso camera movement from the first to the last minute.

As far as I’m concerned, this is not necessarily bad if the result is extraordinary and satisfying movies like this.

Rebecca Romijn is lovely and mysterious, as the movie’s title, a Femme Fatale (especially for boys) very hard to forget.

After the deadly Mystique, a sexy blue shape-shifter from the X-Men, this is definitely the best role of her life.

Antonio Banderas loses some of his Latin macho aplomb, often looking a confused munchkin next to the blonde bombshell.

While this makes him perfect for the part, I understand that the ladies might have preferred to see him more sexy and charming.

I understand the complaints to some extent since many plot passages tend to interpretations rather than open explanations.

The result, however, I think is still unquestionably classy, remaining cinema of the highest order.

In this story, female cunning is against the rough violence of men, exasperating the everlasting struggle of the sexes.

For today’s final movie, we move on to a seemingly more subdued character after the two ambitious and successful femme fatale before.

This woman still lives with her parents, working humbly at a coffee shop counter.

However, at night she definitely changes her face, wandering around the city’s clubs in sexy and provocative clothing.

But her aim is not to look for easy sex, although she barks at all kinds of men pretending to be completely drunk.

When they see her in this condition, they inevitably take her to their homes, trying to hit on her.

That’s when her revenge always comes, humiliating them for their attempt to take advantage of a weaker woman.

Her ritual does not stem from sexual perversion but a tragic episode involving a friend of hers during school years.

A classmate raped her at a party while drunk, with his friends around encouraging him.

Her ultimate goal is make them all suffer, along with anyone who helped them get away with this in court.

However, after many years of obsession and resentment, she gets fed up with that life.

Encouraged by her best friend, she begins dating a guy she met in the cafeteria where she works.

Trying hard to get back to everyday life, she must reconcile her days with revenge she wants to complete at any cost.

But even though she tries to plan her every move intelligently, unfortunately, not everything will go exactly as she wishes.

Silence and please do not mention to the neighbors

Promising Young Woman has garnered substantial critical acclaim, even making it to several Academy Awards in 2021.

A physically and emotionally intense Carey Mulligan shines after excellent roles in Drive and Never Let Me Go.

The actress plays an ironic femme fatale, cold executor of this revenge movie but also a fragile victim at the same time.

Incredibly, many scenes are also comical, though always with a sense of unease omnipresent in the background.

This Emerald Fennell debut is impressive since she is already familiar as an actress in Pan and The Danish Girl.

Editing both the direction and the screenplay, she is helped in the production by the even more famous Margot Robbie, already committed to defending women in films such as Bombshell.

Here we have a smaller, more personal story of cruelty and madness compared to the Fox scandal.

This establishment’s destruction is a strike for everyone, from lawyers to teachers and doctors; nobody is spared.

Male dominance with rape for these people becomes almost socially accepted, almost coming to condemn even the victim.

Too often, unfortunately, shame and fear win over the desire to have justice.

There are plenty of rape and revenge stories in cinema, but many focus stupidly on savagery and violence without digging into the motivations.

In this case, we have an ordinary, happy Happy Days world that suddenly veers into a dark psychological thriller.

But unlike Taken or similar nonsense, in this case, revenge does not lead to redemption or satisfaction of the protagonists.

In conclusion, Promising Young Woman is a nice kick in the balls to the fake respectability of modern society, in reality often as backward as the Stone Age.