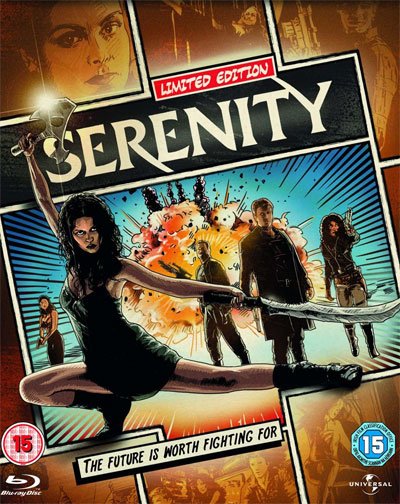 Serenity is a fun 2005 Sci-Fi action movie that follows and concludes the tv series Firefly events.

In this story, we follow the travels of a spaceship full of outlaw bandits who roam the galaxy on the fringes of society and the law.

After a daring surprise attack, they break into a secret lab/prison and free a young girl traveling with them sometime before.

The girl lives with trauma from her childhood experiments, but they also made her an invincible soldier.

The crew of Serenity loves both her and her brother; however, they fear her sudden visions and outbursts of violence.

They constantly live on the run from the Alliance, which fears the secrets the girl might reveal.

Indeed, without even realizing it, she knows the dirty secret about the origin of the Reavers.

However, while closing a deal with some traffickers, she has a vision about a mysterious planet called Miranda.

They decide to leave for that remote place, where all the answers they are looking for could be.

Yet, they must cross an area heavily under attack by Reavers to reach Miranda.

But the soldiers are on their trail, mercilessly slaughtering all their friends and contacts to capture them.

While the Serenity heads into deep space on its final journey, the Alliance sends its deadliest killer to try and stop them.

The hard life of space frontier

Serenity is a well-crafted mix of Sci-FI, western, and adventure making it one of the best entertainment movies from 2005 to date.

It originally started as Firefly, a TV series that unfortunately stopped at the first season.

But, by finding the proper financing, it ends on fire here with this hugely cinematic final episode.

This failure was regrettable for Joss Whedon, the author of wildly successful cults such as Buffy and Angel.

We give the director credit for making an enjoyable film even without knowing the series.

Indeed, the story has a solid, definitive conclusion that wraps up efficiently many previously lingering questions.

The dominant theme is the power struggle, with a core of authority around which revolve planets and systems in the anarchy.

But the soldiers do not leave escape to anyone, striking violently without making a difference between civilians or rebels.

In general, the atmosphere of space frontier life is excellent, on the border between the inflexible law of the Alliance and the lawlessness of the traffickers.

The atmosphere is always somewhere between serious and fun, with frantic action scenes and intense and dramatic moments.

Each character contributes his personality, creating a pleasant atmosphere with a narrative sense in the story.

On the one hand, we have the military army organized as a corporation but regulated by religious figures.

The colonization of the planets also takes on dark horror tones, with the mysterious Reavers that we will also discover victims of the system from villains.

In short, 2005’s Serenity is an excellent independent sci-fi, even while using stereotypical characters/situations for this kind of movie.

For once, TV becomes cinema

The actor’s role is similar to Harrison Ford‘s in Star Wars, the selfish but basically good and heroic mercenary.

His mirror character is the beautiful and unconventional Morena Baccarin, with whom he has an amusing love-hate relationship.

Equally strong than the troop members, the usual Adam Baldwin, already seen as a hard a little dumb but nice in other series like Chuck.

They all want to protect and save the victim of a genetic experiment, Summer Glau, a beautiful and unconventional heroine.

Her dancer ability comes in very handy in the many fight scenes, which have an unusual grace and elasticity.

Finally, Chiwetel Ejiofor is compelling in the role of the cold assassin of the Alliance.

The actor is both severe and elegant in dialogues and attitudes, as he is unbeatable as a ruthless warrior.

Although not very successful, the movie gave new notoriety to director Joss Whedon, starting the famous superhero saga with the first Avengers movie.

In this case, few special effects but used at the right time, enhancing the independent style of the director.

For example, the excellent opening sequence plan presents each character well and the Serenity, the home of the happy troop.

It may not sound like much, but in today’s age of fast-paced blockbusters and unnecessary editing, it is essential.

In every scene, you can find an idea or a cinematographic intuition, finally elevating the already excellent idea of the TV series Firefly.

Similarly, with simplicity and skill, 2005’s Serenity deserves its place among the great classic Sci-Fi adventure movies like Star Trek or Star Wars.