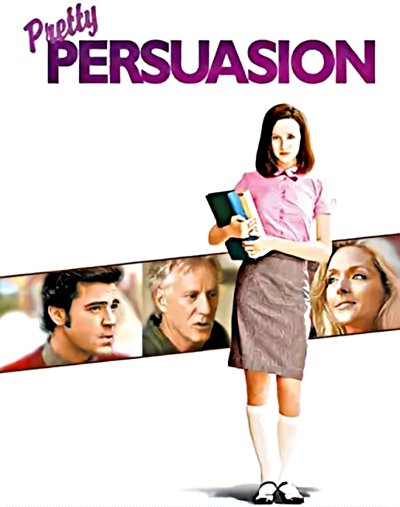 This story is about the friendship of three young girls, students at Roxbury Academy.

The school is seemingly a healthy and safe environment where everyone is happy and friends with each other.

Each student dresses and speaks cleanly and politely, seeming to have every opportunity in this world in life.

The girls prepare for the upcoming play, competing to have the best role.

On the other hand, boys rival each other in sports and classrooms to win the attention of the prettiest ones.

But one day, suddenly, these three friends report one of their professors for harassment.

Sparking national media attention, the school soon becomes a hostile environment where no one trusts anyone.

The girls’ parents wish they could avoid the awkwardness, but everything becomes uncontrollable.

A competition begins among the journalists at any cost, with deception and lies to grab the best news.

However, suspicion also arises among the girls when they realize that the prettiest and smartest one is manipulating them.

While the professor tries to protest his innocence, colleagues, friends, and even his girlfriend abandon him to himself.

His trial continues to get worse, with the jury and popular opinion treating him as a monster.

But everything changes when suspicions begin to circulate that the girls are lying.

The truth will finally come out within the courtroom in an atmosphere of extreme general exasperation, turning comic farce into tragedy.

The communication wall between generations

Pretty Persuasion is one of the best American comedies of 2005, despite having little box office success.

The plot is a cynical and hilarious media massacre that exasperates American success’s ambition and dream.

Especially in Los Angeles, the gateway to Hollywood, everyone dreams of becoming a big star.

Evan Rachel Wood‘s character embodies all this passion taking it to the point of psychopathic exaggeration.

These girls are so beautiful, and they actually want attention to them not only for their outward appearance.

The raw and ruthless realism of the various characters, each defending their own little personal space, is a variation of this theme.

Professors, lawyers, and journalists are no better than this little girl, who fascinates and manipulates everyone.

It matters little to be white, black, Jewish, or Muslim: what reigns is fame and money, to be obtained in any way.

The story is an ecosystem of characters with friendly faces, hiding the despair of two generations behind false smiles.

What makes the wheel turn in this world are little loves and betrayals, blackmail and threats, racism, and fake respectability.

But when these little secret rules of our society come out in the open, public opinion ignites with indignation.

Therefore, the incommunicability between mass media and real people is the mirror of the barrier between children and parents.

This wall of silence applies to everyone, where each one holds an impenetrable armor to isolate from the outside world.

Summing up, behind the innocent appearance of a comedy, Pretty Persuasion of 2005 is a movie rich in profound and intriguing analytic hints.

A young star on the road to success

Although still young, she shows the talent that will lead her to work with directors such as Woody Allen or in the lead role of the Westwood series.

Her facade of sexy innocence hides the black heart of a cruel and manipulative sociopath.

Ready to annihilate anyone who gets in her way, she socially slaughters professors, boyfriends, journalists, and even her best friend.

James Woods is hilarious as her father, a cynical and indifferent businessman.

Concerned only with work and drugs, he completely disregards his daughter except when she becomes a countrywide problem.

Ron Livingston is the professor victim of the plot, unable to understand why his world is collapsing.

And like so many others falsely accused of harassment, finding out the truth in the finale will do nothing to help him get his life back.

Marcos Siega does a great job dealing with intrusive and risky topics like racism and sexual abuse.

Not an easy task for this director, but one that he tackles by intelligently writing dialogues that are always brilliant and never banal.

Especially in the second part, the roles reverse several times, until we also see the beautiful protagonist as a victim.

Although she is often an evil character, the final scene where she holds back tears for her brother, who died in the war, is the story’s emotional climax.

The truth is that a modern tale with no salvation for anyone is perhaps not what audiences like to see in the cinema.

But maybe now and then we all should open our ears to what we don’t like to hear because usually, those are the most important things.