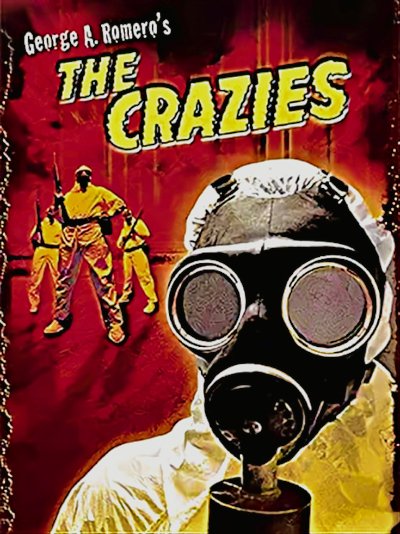 Many people know the late director George Romero, father of modern zombie movies, but not sure how many have seen The Crazies from 1973.

The story begins in an almost quiet and ordinary way, with two children playing at home in the American countryside.

But suddenly, their father goes crazy, killing his wife and then setting fire to the house with the children inside.

The emergency services take the seriously injured children to the hospital, where the army arrives shortly afterward.

They immediately order to round up the population and quarantine the whole town without giving explanations.

Indeed the national security was monitoring the area since, a week before, a plane containing some experimental vaccines had crashed nearby.

Unfortunately, these vaccines are actually a new biological weapon, which has polluted the groundwater throughout the region.

Those who get sick initially seem confused, acting weird, stupid, and childish.

However, they soon begin to behave violently and uncontrollably, to the point of trying to attack and kill anyone.

When the situation finally degenerates, the military starts to shoot on sight those who have not been able to capture.

The president’s scientific staff monitors the situation from a distance, undecided about what to do.

Means and personnel arrive very late, slowing down the already complex study of a cure for the virus.

So they prepare a terrifying final solution if the contagion spreads: bomb the city with atomic weapons.

In the general chaos, the soldiers carry out their orders without mercy, decimating the population that tries to rebel.

Only a few people escape, and yet even among them, the virus is mutating their brains into the ultimate madness.

The dark heart of power

The Crazies of 1973 is another masterpiece by George Romero, classily remixing the apocalypse politics usual in his movies.

Romero marches over the heart of America, trampling every character and institution without mercy.

Although the plot is very different, it has many similarities to another cult Sci-Fi film, Invasion of the Body Snatchers.

Also in this case, in fact, the ferocity of the common man comes out finding himself in the most extreme situations.

Unlike his unforgettable Night of the Living Dead, here there is no need to use the monstrous metaphor of the zombie.

The monster is openly the conscienceless bureaucratic apparatus of the government and the army, which immediately resort to violent repression.

First, they create the virus, and unable to control the contagion, they try to bury the truth with the citizens.

In addition to their cruelty, the director focuses on the obtuse stupidity of the military and political figures.

They do not want to listen or understand the scientists’ reasons, just wasting time that they do not have.

This stupidity, for example, locks up among the sick the scientist with literally the virus cure in his hand.

In short, although the virus leads to madness, those more crazy seem to be the healthy ones who hypothetically should solve the situation.

Most of the characters, whose personal dramas we follow during their escape, are actually little more than extras.

The American establishment is the absolute protagonist, whose madness and blind pursuit of power Romero criticizes.

There are no heroes or winners in this story, but only a black hole that swallows up all of humanity.

When genius wins over money

1973’s The Crazies is Romero’s highest rhythm movie, which he underscores with an omnipresent military drum roll soundtrack.

Unfortunately, many production problems forced the director to work with an extremely low budget.

He lived with this condition during the making of every one of his films; almost the producers enjoyed opposing him.

However, he builds a modern horror thriller with incredible tension, just through editing with his genius.

Indeed, with almost no camera movement, Romero turns the poverty of the production to his advantage.

The choice of simple, television-like cinematography makes for an exciting, believable, and documentary narrative style.

The special effects are practically non-existent, but the excellent staging compensates for the lack with moreover many action scenes and shootings.

From the beginning, the sequence of events flows breathlessly and relentlessly until the cruel and unforgettable finale.

The atmosphere is surreal but horribly believable, breathing the violent and destructive madness of men who become crazier than monsters.

In short, looking at the current pandemic that (hopefully) we are leaving behind, today is still a film more relevant than ever.

Unfortunately, since 1973 The Crazies has remained almost unknown to the general public, until the 2010 movie of the same name.

The latter made good money at the box office, and I found it a decent horror but unfortunately without Romero’s political and social commitment.

A lot of productions, big and small, have lost this narrative courage, just trying to give the audience what they want.

Maybe the audience often doesn’t know what it wants, and therefore, directors like Romero must hold their hands and put them on the right path.