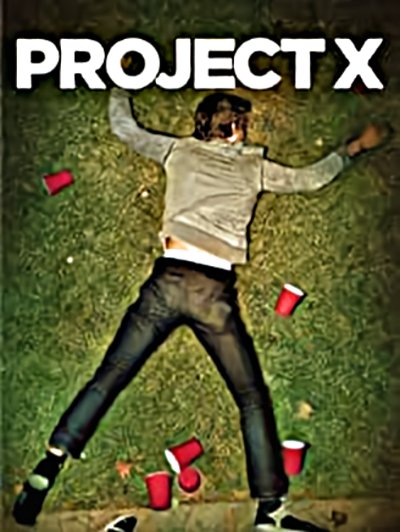 In 2012 Todd Phillips, still fresh from the success of The Hangover, brought to theaters his latest movie production, Project X.

Instead of three friends not remembering the night before’s party, three kids celebrate one of them turning 18.

In addition, a mysterious friend comes along with making a documentary, filming everything that happens.

These friends are relatively anonymous among their peers, desiring popularity, especially with girls.

Hoping that the party will change everything, they begin diligently to make the various preparations.

The first item on the shopping list is drugs, so they meet a crazy dealer who lives in the suburbs.

After concluding the deal, they steal a statuette with a packet of ecstasy pills inside as a joke.

Not having a lot of time, they involve some older kids to trigger buzz and get the most people possible.

Unfortunately, the party seems initially to be a complete failure when it begins.

But soon after, it goes incredibly viral on social, with boys and girls flocking from all over the city.

Suddenly everything becomes a general revelry much more extensive than they can handle.

In addition, the popularity fuels the increasingly dangerous madness of the revelers, who get high together with stolen ecstasy.

At that point, the party degenerates with the police in riot gear trying to quell the unrest.

But in the end, despite the general devastation, the three friends come out on top, and the whole school cheers them on as heroes.

The young birthday boy is the happiest of all, winning over the beautiful blonde who until the day before was just a friend.

Summing up the essence of this movie, Project X is a faithful chronicle of a birthday party of a small group of nerds.

What makes the difference is the push of social networks, bringing everything out of scale beyond the protagonists’ control.

It’s no coincidence that everything ends with an urban war and the uprising of the youth against the police, more for fun than for rebellion.

However, the destruction of their burning neighborhood is not the end for these kids but rather an exciting new beginning.

Although they will be arrested and charged, somehow, it’s always refreshing to see the underdog win for once.

The future of these kids is explained, in fact, in captions in the style of the old Animal House.

It was an ironic reference that I appreciated, as even for John Landis was a tease to American Graffiti ending.

Otherwise, the party goes on as we might imagine, with lots of pretty, scantily clad girls and stoned, messed-up boys.

Putting adult hypocrisy aside, there will always be a natural occurrence for teens seeking the high, alcohol, drugs, and girls.

Of course, it also matters that they learn what’s fun doesn’t become a problem or a life-ruining addiction.

Whether it is a birthday, a bachelor or a graduation party matters little.

The common denominator is always to mess up until dawn, enjoying their youth with excesses that are unlikely to be repeated as adults.

There is no rush to grow up and then become parents, worrying about their children’s parties in turn.

A small production with a less than famous director and cast

As mentioned, this is a Todd Phillips production, well before he got to more serious films like Joker.

The director was rightly trying to ride the wave by repeating the success of The Hangover and succeeding fully.

As a matter of fact, Project X grossed more than $100 million, ranking in that year’s top ten movies.

In short, an excellent cinematic result for a production made in less than a month with a budget of just over 10 million.

Equally apt is the choice of entrusting the project to Nima Nourizadeh, who came from the world of video clips.

The young director made an entertaining film, refining his technique that he would later use even better with the fantastic American Ultra.

How they put the cast together was unusual, opening a website that ironically invited recruitment.

Many boys responded enthusiastically to the proposal, excited at the idea of ending up in a film produced by one of the most famous directors at that time.

Of all the characters, in reality, the only famous was the mysterious friend filming everything, whom we hardly ever see.

He is actually Dax Flame, a famous blogger with a large following of fans who loved his over-the-top humorous productions.

Summing up Project X is a good comedy movie for boys, with some vulgarity and nudity but without exaggeration.

I would go so far as to say, indeed, that if you want, it can also be a film seen in the family, always assuming you have a shred of humor.

Indeed, you can also laugh at irresponsible and dangerous behavior, which sooner or later we all commit if we are honest with our conscience.