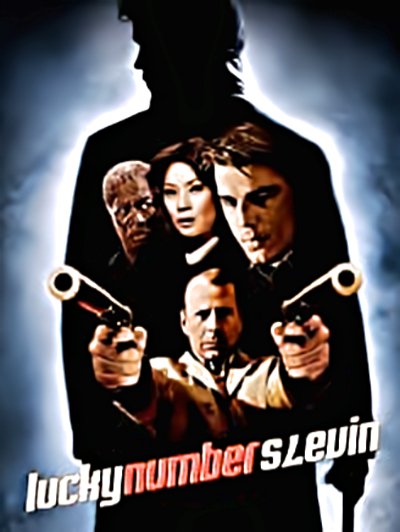 I hadn’t seen Lucky Number Slevin in a long time when I happened to find it available on streaming yesterday.

I immediately remembered why I liked it so much, as one of the best following the style of movies like Pulp Fiction.

The story begins with the young Slevin Kelevra, who has just arrived in town, being beaten and robbed in the street.

He heads to the apartment with a broken nose and no money or ID, where a friend is presumably waiting for him.

The apartment door is open, and there is no one inside except the beautiful and friendly neighbor with who he immediately becomes friends.

Soon after, unfortunately, some criminals arrive and beat him up again, dragging him to their boss.

The latter confuses him with his friend, demanding payment of a debt the latter had with him.

Not having the necessary sum, the boss offers him an alternative: to kill one of his old rivals, a rabbi who lives in the building opposite.

When he comes home again, he barely has time to consider the proposal when someone drags him out again.

This time, the rabbi’s men take him to their boss, and he too believes that poor Slevin owes him money.

At that point, cornered by these gangs of thugs, he realizes that whatever alternative he chooses is now screwed.

Helped by his beautiful neighbor, he will try in every way to escape the unacceptable demands of the two men.

But a mysterious hitman is hunting him down, working for both gangs, and planning his strategy around him.

Lucky Number Slevin is a fun carousel of many different situations and characters.

The whole story takes place in a few closed locations within a criminal ecosystem, which dominates all of New York.

The comic style is violent but funny and even hilarious in many places, closely resembles the great Quentin Tarantino.

Unfortunately, there is no division into chapters like Pulp Fiction or Reservoir Dogs.

Indeed, I think that separating so many stories and characters better would have facilitated understanding.

But in the end, the movie’s editing is still outstanding, and there are no particular problems, if not some unnecessary repetition.

The character of Slevin is a perfect fulcrum around which revolves the entire plot of criminal revenge.

Suffering from a supposed disorder that doesn’t make him feel anxiety or worry, he is always ironically detached in every scene.

That sort of dynamic contrast leads him to deal almost with indifference to the two bosses who threaten his life.

However, a passionate and tender love story also fits seamlessly into the murder and deception ensemble.

Summing up, even if you have seen Lucky Number Slevin, I suggest you watch it in streaming again.

Being a movie with many facets to appreciate, you might miss some of them if you don’t oversee it.

A superstar chorus for an awesome pulp song

He’s an ordinary sweet guy who never loses heart, despite being repeatedly hit and cornered by bad luck.

The pair of rival bosses, Ben Kingsley and Morgan Freeman, play without a doubt the best moments of the movie.

Once partners and now bitter enemies, they live in their towers facing each other, ready to start a war at any moment.

The murder of the son of one of them will be the straw that will break the precarious truce, starting the final massacre.

Lucy Liu would almost deserve a separate movie for how likable and adorable her minute and unstoppable character is.

This romance side actually detaches from the rest of the story, which is darker and more violent.

Finally, the killer from Bruce Willis is an impenetrable mask, cold and impassive as ice.

The actor plays the role basically with only one facial expression, but it is always the right one at the right time.

I hope I have explained why I like this movie so much, which is not easy to talk about without spoiling the plot.

Anyway, I leave the link to watch in streaming Lucky Number Slevin at a low price, a real golden deal.

If it is your first time, enjoy the show; otherwise, let me know if you found something you missed.