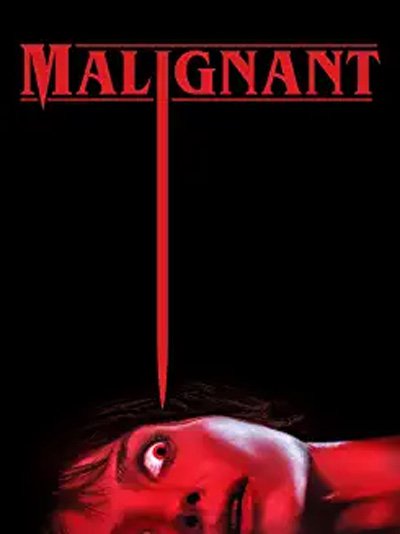 Malignant is one of the movies that made me happiest in 2021, as it marks James Wan‘s return to the horror genre.

The prologue begins inside a hospital/laboratory where some doctors/scientists try to control a mysterious creature they call Gabriel.

With much difficulty and some casualties and injuries, this powerful evil finally seemed to subside.

Years later, we see the sad life of a young girl, companion, and victim of an abusive and slacker partner.

Besides working hard as a nurse to support him, he violently slams her head against a wall during an argument.

An invisible presence begins to haunt her from that moment on, starting with killing her obnoxious boyfriend.

After that night, this being tracks down and chops up a few doctors with a brutal and inexhaustible grudge.

The inexplicable connection he has with her also quickly leads the police to suspect her.

Indeed she saw these murders while they were happening, inside a dream-like trance state.

The cops obviously don’t believe her when she tries to explain how the monster seems to have supernatural abilities.

Besides its incredible strength, this presence disturbs electronic devices, even manipulating television screens and cell phones.

Further investigation discovers that all the victims were doctors of this girl when she was in the hospital as a child with an unspecified illness.

At that point, she realizes that she has an unbreakable bond with this monster, who carries an unquenchable grudge against her.

To save herself and her loved ones, she will have to investigate deeper into her past and discover the true root of this horrible evil.

Malignant is a most unusual movie, skillfully mixing different horror styles and sub-genres.

At first, the monster seems the usual intangible presence, acting in the shadows, like a ghost or demon.

Soon, however, it materializes exceptionally physically with an excellent narrative twist.

By then, the horror drifts into action a few times, such as the brutal carnage inside a police station.

Without exaggeration, it looks like a twisted version of Fast & Furious 7 and Aquaman, unsurprisingly James Wan movies.

The only difference is that instead of superheroes, we get a monster intent on exterminating many cops.

However, the director manages to maintain the balance between these action explosions and the many sequences of fear and terror.

In this way, Wan makes the digital soul of modern cinema coexist perfectly with the old slasher system of the past.

Indeed, by taking the best from both, the result is a bloody scare merry-go-round that’s both exciting and frantic at the same time.

That’s a far cry from too many horror films these days, which aim more for the usual non-stop jumpscare and little else.

Strangely enough, James Wan himself has produced many movies of this type, such as the Annabelle saga.

When he directs, it’s a different story. Then we witness a true horror genius talent, too often unnecessarily busy with Hollywood blockbusters.

A super villain is born?

But the director does not forget the last years spent with his superheroes, such as the turbulent action scenes already mentioned.

Indeed, from an original and intriguing premise, he packs what could be a superb comic book villain.

An elusive monster with its costume and special weapon, a kind of sword, forges from the trophy of one of its victims.

This would be the same weapon with which, for example, he slaughters dozens of cops in the phenomenal action-horror scene mentioned earlier.

The actors and actresses in this film are not unforgettable, but they perform decently in the service of Wan’s virtuoso direction.

Annabelle Wallis is pretty enough to be the lead without needing a great actress.

Very often, it actually matters more what’s going on around her than getting tight close-ups of her face.

George Young seemed better to me, though too young to seem believable as a cop.

However, it doesn’t matter; the real star of the story is Gabriel, a monster of terrifying design and devastating brutality in every scene.

I was surprised by Malignant, expecting James Wan‘s new horror to look more like The Conjuring, his most successful saga.

However, I’m delighted I was wrong. I can only add that I can’t wait for the director to amaze me again.

Unfortunately, the wait seems long at the moment. The director appears willing to lose more time with the pointless Aquaman sequel.

That’s a massive waste of talent that makes me sad, and yet something he’ll no doubt make more money with.

No Exit – Six People Under The Same Cold Destiny

Revenge Of The Machines – Good...