No Exit – Six People Under The Same Cold Destiny 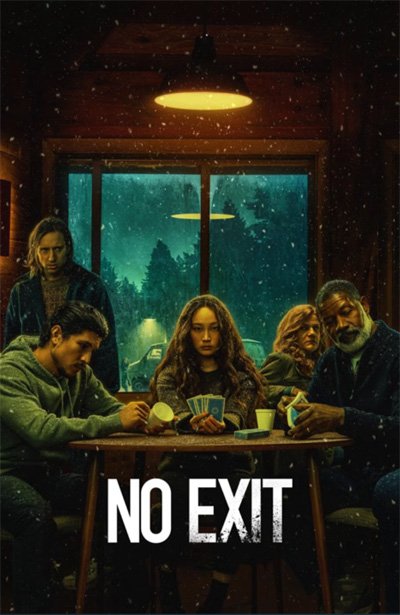 No Exit is an exciting, straightforward movie with a handful of characters in a shelter because of a snowstorm.

The main character is a young girl on her way to find her mother in critical condition at the Salt Lake City hospital.

Waiting for her will be her sister, who she heard on the phone and is not enthusiastic about her visit.

Indeed, the young girl has just escaped from a rehabilitation center, where a judgment put her instead of prison.

However, she can’t miss what may be the last chance to talk to her mother, so she takes the risk.

After a short drive on the highway, she detoured because of traffic backed up by accident.

Yet, she takes a lonely mountain road and soon finds some policemen urging her to stop.

Nearby, a big storm is raging in the area, making travel impossible for everyone.

The cops, therefore, urge her to go to an old shelter nearby, where she can wait for the weather to improve.

When she arrives, she finds other stranded travelers, such as a married couple and a couple of boys.

Wanting to get news about her mother, she goes out into the parking lot to make a phone call when she hears some noises coming from a van.

In the back of the vehicle, she finds a little girl captive and gagged, evidently kidnapped by someone in the shelter.

At that point, she begins trying to figure out who the kidnapper might be, but the night will be much longer than she can imagine.

Five suspects for one culprit

I honestly started watching No Exit without much expectation, only to be intrigued by a really well-crafted movie.

It’s easy to draw comparisons to The Hateful Eight, given the trap setting surrounded by a snowstorm.

While not reaching the level of Quentin Tarantino‘s great western thriller, the characters work equally well.

An elderly husband and wife, one obnoxious and rude young man, and another more charming and kind within this shelter.

With the protagonist and the kidnapped child, we get six characters in total whose dynamics develop believably and excitingly.

An excellent introduction features the main character of Havana, Rose Liu, who is ambiguous, obnoxious, and quiet.

The escape in the blizzard immediately puts us in the right mood, a feeling of unease little explained but very effective.

After that, we arrive at our last stop, the shelter where the whole bloody affair will take place.

The plot has a few twists placed at just the right time and features some surprises in unexpected ways.

It doesn’t waste a single minute with unnecessary scenes and dialogue in its hour and a half total length.

Personally, I love these small stories, if told in the right way, compared to others that sometimes have more ambitions of greatness, but fail miserably.

I think it’s because they tell something closer to our everyday life, compared to the usual heavy bricks of superheroes and secret agents.

With the proper understanding that No Exit is a low-budget movie, it can bring valid satisfaction.

Even from small can come something big

Damien Power puts together a high-tension thriller, relying on the 2017 best-selling book by Taylor Adams.

The director didn’t have much experience outside of a few shorts and the respectable horror Killing Ground.

However, despite not having monumental money or means, I highly enjoyed the end result.

First of all, the choice of the main character, the unusual and charming Havana Rose Liu, is excellent.

A very troubled girl who is in conflict with the whole world, starting with her family.

Even at the center where she is in rehabilitation, the other patients, doctors, and nurses can’t stand her.

However, even such a character deserves her chance to be heroic, as she will do in this long night of fear.

Fighting for the life of little Mila Harris, she won’t know who to trust inside the shelter.

Between them, we have two elderly and veterans of TV series, here as a married couple and their unspoken secrets.

They are Dennis Haysbert, famous president of the action spy series 24; and Dale Dick, the funny prostitute in My Name Is Earl.

Finally, the two young boys, Danny Ramirez and David Rysdahl are very different and complete the poker of suspected kidnappers.

That’s pretty much all the cast is, but I assure you it’s more than enough for the story you’ll be witnessing.

As mentioned, No Exit is just a small movie that can give you great thrills if you give it a chance.

Let’s forget the blockbusters for a night, locking in and trying to figure out the villain among these characters.

Breakthrough of the Mind – Movies about guilt and regret