Famous And Fascinating – Movies With The Awesome Johnny Depp 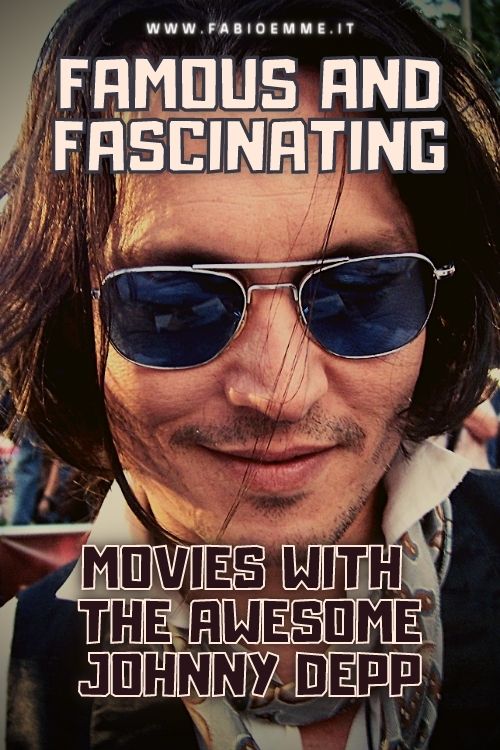 Johnny Depp is undoubtedly an actor that few people don’t know, either as a crazy and problematic star or in unforgettable movies for every generation.

Starting as a bit of rocker from Kentucky, he then switched to the cinema, where he achieved much more success.

Without doing a complete filmography, let’s say he acted for cult directors like Terry Gilliam, Tim Burton, and Oliver Stone.

For the latter, in Platoon, he made his first brief appearance, already stealing all teenager hearts in 21 jump street.

In this sense, this rebel embodies exactly what a parent would never want to see in his daughter’s boyfriend.

He’s a party boy always in trouble, with drug problems and excesses like the famous disputes with girls and paparazzi.

But like any stoner with a heart of gold, he eventually got his act together, especially after the tragic death of his close friend and rising Hollywood star River Phoenix.

Then he ditched the rebel uniform, started a family, and climbed success gaining a star on the Walk of Fame.

Today, we look at three of his interpretations that the public has ignored or criticized, or perhaps forgotten.

Movies in which Johnny Depp plays a particular role stuck with me more than others in his long, prolific career.

We begin this short selection of Johnny Depp movies with a heart-pounding thriller without a moment’s respite.

The actor plays a mild-mannered father traveling with his little daughter, who has just arrived in town after a long journey.

Unfortunately, he meets a man and a woman at the station who, pretending to be cops, kidnaps the little girl.

Threatening to kill her if he were to rebel, they accompany him to a large convention center.

A political rally is about to begin in the building, where a governor will meet with her party members.

Unbelievably, the kidnappers blackmail him by clearly explaining that if he does not kill this woman, then his daughter is dead.

As the hands run and the minutes fly by one by one, the man finds a humble shoeshine boy as his only ally.

Together they try several times to get out of that horrible situation, but soon they realize that it is a big conspiracy.

Indeed, leading this conspiracy are party supporters, now tired of the governor politics.

Increasingly in despair for his little girl, he must play a deadly game constantly under the surveillance of his blackmailers.

An unlikely but exciting last-minute adventure

Nick of Time is one of the last movies of John Badham, author of cult movies such as Saturday Night Fever or Short Circuit.

The director chooses a fast pace in real-time over 90 minutes, shooting many scenes with a handheld camera.

It pays homage to The Man Who Knew Too Much with James Stewart, to whom a terrorist kidnaps his son.

Here, too, the suspense mechanism works to perfection, staging a high-tension tragedy of the absurd.

Initially alone, with the force of desperation, he manages to turn the situation around, despite moving under a thousand eyes.

To give him no respite is an exuberant Christopher Walken, as usual with his characters’ disturbing and sympathetic schizophrenic frenzy.

This blackmailer hallucinates and is lucid in his madness as an elegant psychopath, giving credibility to a plot with a few holes.

Behind his back, he has an entire establishment helping him frame the guy for the murder of the inconvenient senator.

I remember being very excited when I saw this movie as a kid, already knowing Johnny Depp after excellent films like Edward Scissorhands.

Today I recommend it to those who want to enjoy a thrilling race against time but give some justification to a series of events perhaps a little unlikely.

From American soil, we then move to a story that takes place through the heart of Europe.

In this movie, Johnny Depp plays a shady book dealer, envied and hated by all his colleagues.

The man is known for buying cheap, anyway, he can, and selling rare and highly sought-after texts for a lot.

One of his best customers is a wealthy businessman who is obsessed with ancient texts of a demonic nature.

After taking advantage of the suicide of a well-known collector, he comes into possession of a rare piece of Italian origin, The Ninth Gate.

It is one of only three that have survived over the centuries, as the church burned all other prints.

The businessman, however, is convinced that only one is authentic, so he sends the dealer to Europe to investigate.

He will have to go first to Spain and then to France, where the owners of the other two copies live.

Comparing these books, apparently totally identical, the dealer discovers that some of the illustrations are different.

Putting them together, he believes it is possible to solve a satanic riddle, which should evoke none other than the Devil.

Initially skeptical and thinking only of money, he changes his mind when the copy owners start dying one by one.

Even Lucifer goes to the library?

For a film with a dark European soul, Johnny Depp is in the capable hands of a veteran like Roman Polański.

The French director interprets The Dumas Club in his own way, leading to an excellent supernatural thriller.

I’ve read a lot of criticism about how little resemblance there is to the book, but I can’t argue with that as I’ve never read it.

Speaking only of the film, it keeps mystery and suspense alive with an excellent ending open to multiple interpretations.

In addition to Depp, we then have a top-notch cast, starting with a monumental Frank Langella.

The actor plays a satanist of great culture, wealth, and power of great charm and sophistication.

But he is also a ruthless killing machine who will stop at nothing to have his face to face with the Devil.

Unique in helping the protagonist is the beautiful Emmanuelle Seigner, a thoroughbred actress in many Polański films.

She stars as a mysterious girl who follows the trafficker’s every step, seeming to know a lot and intervening numerous times to help him.

The Ninth Gate is a remake of the old detective movies, though investigating books instead of crimes.

But rest assured, even the crimes will not lack a story that exudes magic and conspiracies in every frame.

So let’s admire this homage to cinema and literature, here in a wonderful marriage in the Prince of Darkness’ shadow.

After two dark, high-tension stories, we now turn to a gothic comedy from the brilliant Tim Burton.

In this movie, Johnny Depp is a vampire who has been buried alive for over two centuries.

When some laborers accidentally discover his coffin, the creature breaks free and returns to his family’s old castle.

Unfortunately, much has changed during his absence, and the luxurious mansion slowly falls into disrepair.

His descendants are barely hanging on by barely carrying on their fishing industry against a ruthless local businesswoman.

When the vampire visits this woman, he discovers to his horror that she is the old witch who ruined his life with a curse.

Long before they were lovers, she reacted with unrelenting rage when he fell in love with another woman.

He initially tries to reason with her by negotiating a truce but realizes it is useless to seek any agreement.

Not satisfied with having tormented him and his heirs for centuries, she seeks to destroy the lineage for good.

However, the vampire begins to revive his business and rebuild his castle, sending the witch into a rage.

While this older man tries to catch up with the times, with the help of his new wacky family, the final battle gets closer every day.

A lovable horror movie to laugh at

The actor has starred in numerous director’s films, starting with those mentioned above and iconic Edward Scissorhands.

As usual, the staging and direction are top-notch, exaggerating Burton’s style with class.

The elegant environments and flamboyant costumes combine perfectly with the classic impressionism shadows and lights.

In addition, the characters are phenomenal, including above all the wonderful Eva Green as the ruthless porcelain witch.

However, she too is a victim, as her hatred stems from the tragic dilemma of the protagonist rejecting her love.

Equally beautiful and good is Michelle Pfeiffer, the descendant of the vampire who runs a castle that falls apart.

Finally, we have the dark charming Helena Bonham Carter, Burton’s ex-wife and protagonist in many of his films.

The actress is a psychologist who takes care of the vampire, pretending to help him but carrying out her plan.

Fans have been very lukewarm about this film, even though I consider it one of the director’s best of the last decade.

Maybe his style is going out of fashion, but for those who still want to be amazed by his genius, Dark Shadows is a perfect work.

Let’s hold on to such authors while they are still around because it certainly won’t be so easy to replace them, one day hopefully far away.

Breakthrough of the Mind – Movies about guilt and regret