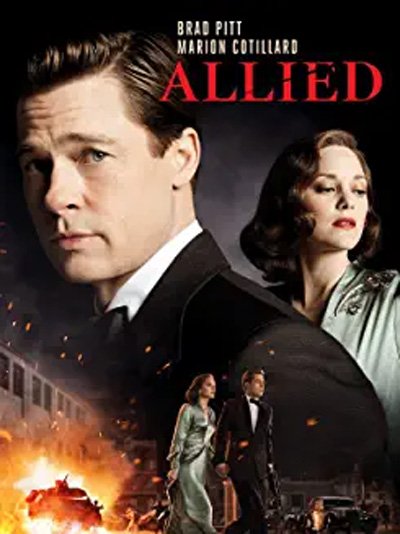 Back in 2016 came out in theaters Allied, a film with the classic soul of the older films about espionage and feelings.

The story begins with a handsome prologue in Casablanca, where two spies meet for a dangerous assassination mission.

He is a Canadian aviator, she is an elegant French ex-partisan, and they will have to pretend to be married.

The mission is booming, and the pair infiltrate during a Nazi celebration, killing a dangerous local politician.

Later, having fallen in love during this experience, they run away and get married for real, going together to London.

Years later, their marriage seems to be going great, have also given birth to a beautiful baby girl.

But everything changes suddenly when the soldier’s superiors call him to give him disturbing news.

For some time, there have been leaks of confidential information, so they are sure there is some Nazi spy among them.

Incredibly, the officers warn the man that his wife is one of the prime suspects.

The army intends to expose the traitor by circulating fake information and then checking where the leak came from.

In his desperation to know if his wife is a Nazi spy or not, the soldier will have little time to investigate.

He decides to personally contact the surviving partisans who knew the woman during the resistance.

However, while hastily traveling through enemy-invaded France, he still does not know what he will do once he finds out the truth.

Since my childhood, I’ve loved Robert Zemeckis masterpieces like the Back to the Future saga and Who Framed Roger Rabbit.

This director is always at the vanguard on a technical level, besides being a great camera master with always fresh and original style.

Allied is a film that in 2016 pays homage to unforgettable classics of the 30s and 40s like the movies with Humphrey Bogart.

Above all, we have, for example, Casablanca, living in the mood of the whole story’s opening.

After this start between espionage and romance, the story becomes a thriller full of anticipation and tension.

The family intimacy of the couple is a bomb waiting to explode when the detonator of betrayal triggers the mechanism.

Zemeckis blends cinematic genres to perfection, looking to the great classics while maintaining a smooth, modern aesthetic and camera movements.

I’m glad to see this director back on the rise after, in my opinion, he had made some missteps with several animation movies.

Indeed, I can’t say I appreciated The Polar Express or Beowulf much, although extremely fascinating and technologically advanced.

Since 2012 the director chose to challenge the audience with complex and mature stories, such as Flight and The Walk.

It was a brave choice that made him a great artist, although it did not pay much at the box office.

Allied is a film that grossed well in 2016, but it didn’t make significant gains given the high production costs.

However, as always, true masterpieces don’t give a damn about money because, in the end, what remains in history is the work’s artistic value.

As in many of his other movies, Robert Zemeckis can once again count on an exceptional cast.

On all, of course, stands out for its charm and skill the fabulous pair of protagonists.

I had already mentioned Brad Pitt a short time ago for his excellent performance in the intriguing Ad Astra.

The actor really seems to age improving like wine, drawing new inspiration from his face marked by wrinkles.

As the most loved worldwide sex symbol in his youth, now he rightly chooses more complex and challenging roles.

His desperation shines through with great class in this character, without the need for exasperating or exaggerated scenes.

At his side are the wonderful Marion Cotillard, a love nymph and invisible shadow that insinuates doubt in his certainties.

The French star has been an international star for a long time, especially after big hits like Inception or Contagion.

In the role of the (maybe) enemy spy, the actress offers a delicate and robust performance at the same time.

A loving mother and wife also capable of killing and lying, putting her husband in a horrible position of suspicion.

This strange and disturbing family picture is as ambiguous and intriguing as Zemeckis’ direction.

Allied is a film with two souls that coexist in great harmony, with classic shots and special effects worthy of 2016.

Therefore, let’s all admire together a work that confirms the incredible versatility of a master of American cinema.

Nowadays, they are protected almost like endangered species, especially those who produce big blockbusters like this one.

Once Upon a Time in Hollywood...