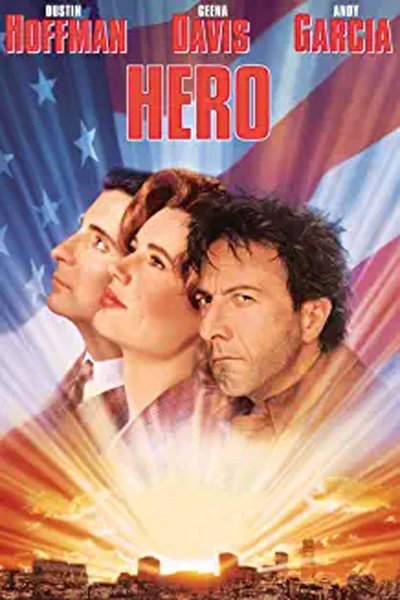 Hero is an entertaining 1992 movie by Stephen Frears, starring a phenomenal Dustin Hoffman and Geena Davis.

The actor plays a petty thief who lives by scamming anyone and stealing anything without shame.

One day returning from the home of his ex-wife, with whom he has a bad relationship, he finds himself at the scene of a dramatic accident.

Indeed, an airplane crashed right in front of his nose on the road traveling in his brokedown car.

Almost accidentally, this unlikely hero succeeds in saving all the passengers before the vehicle explodes.

Without realizing the importance of his actions, he runs, and the following day the police arrest him in a raid.

Among the many lives, he saves a famous journalist, who later wishes to find him for her TV network.

Therefore, to persuade the unknown hero to come out of the closet, they decide to offer even a million dollars.

But another picks up the prize, a homeless man who gave him a ride and knew all about the incident.

Pretending to be him, he pockets the money, making the crowd cheer and adore him as an idol.

He becomes a symbol of selflessness and goodness, while the real hero is in prison, unable to do anything.

However, when his lawyer convinces the judge to let him out, the moment of the final tragicomic face to face will come for everyone.

Truth and justice according to television

Hero is a crackling 1992 movie about social euphoria, fake feelings, and the power of the television medium.

This media is always ready to acclaim the hero’s courage of the moment, just as it mercilessly sinks him when the light of glory goes out.

For example, movies like Sabrina and Irma la Douce made people laugh all the time with great class and elegance.

Many of the topics covered are no longer modern, yet still perfectly current, despite being from 1992.

If the information has moved from television to the internet in today’s world, false myths and misinformation have remained the same, if not worse.

None of these characters are morally innocent, but rather each of them has their sin to hide from others.

Similarly, the media decides at what time and who to light up on their screens, making them a hero.

Truth is debatable, never absolute or sure, and finally, TV stars are no better than the worst of thieves.

What matters most is to be aesthetically beautiful and to seem reasonable and informed, creating something in which people can mirror themselves with adoration.

In all this, the world of YouTubers and bloggers may not be better than before, but at least it gives voice to all much more democratically.

Hero successfully ponders these issues humorously and intelligently, with an absurd but tragically believable story and characters.

An American comedy with a British soul

While the entire cast is outstanding, Dustin Hoffman rises as a fantastic chronic cheater who cannot tell the truth.

He robs anyone without hesitation, like the people he rescues from the burning plane or his lawyer during the trial.

Yet even this man has a family, a wife hating him and a young son who is his only friend.

Seemingly docile and naive, she too is, in reality, a television shark always looking for the latest scoop to boost the audience.

Finally, we have the charming Andy Garcia to close this strange triangle of protagonists, falsely posing as a hero.

However, from that initial lie, the man will incredibly become a true inspiration to kindness and generosity for everyone else.

1992’s Hero came at the height of Stephen Frears‘ American movies when he worked primarily for big Hollywood production.

At that time, the great English director brought to theaters some authentic masterpieces, such as Dangerous Liaisons and The Grifters.

In this case, the mood of the story is that of carefree comedy, although Frears never forgets to scratch his political and social satire.

It is no coincidence that this movie has earned little at the box office, dealing with matters unpalatable to the American public.

However, it is still an excellent example of intelligent entertainment, directing, and acting at the highest levels.

I conclude therefore recommending to watch it to anyone, young or old, alone or with a company; you can be sure that it will not disappoint you.