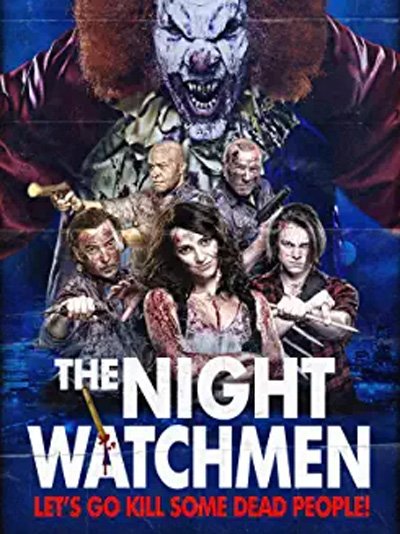 The Night Watchmen is a 2017 movie that begins with just another night in a Baltimore newspaper’s offices.

A young boy, newly as a watchman, begins his first shift among older coworkers who instruct him on his new job.

They enjoy teasing him most of all because it is never too much work to do in that quiet place.

But everything is about to change forever when someone accidentally delivers the coffin of a clown from Romania.

The clown was famous worldwide, and all the performers in his circus died shortly before under mysterious circumstances.

The clown soon reveals that he is not dead but is actually a bloodthirsty hellish being.

He then begins to hunt humans, who mutate into vampires after being bitten.

In this way, most employees die almost immediately, only to come back to life and join the clown army.

Our brave guardians try to escape the offices in any way they can, along with a girl from the newspaper who survives the carnage.

But when they put one foot outside, they realize that vampirism spreads unchecked throughout the city.

At that point, they have no choice but to stay and fight, despite all of them being lazy cowards.

However, during the night, these friends will discover that they also have something heroic inside.

Together with the cutest and most lesbian in the office, they need to find out how to defeat these monsters.

Without even knowing it, all of them will fight an epic battle for the fate of humanity.

The carefree soul of yesteryear’s B-Movies

The Night Watchmen is an irresistible comedy-horror movie for a pleasant demented evening, unfortunately, unnoticed in 2017 theaters.

It features the classic group of good-hearted, light-spirited rogue drifters.

These lazy guardians have only ever fought boredom, figuring out how to pass the time until the end of their shift.

The horror-comedy recipe works both ways, entertaining with excellent splatter and gory scenes.

A few ingredients are available in this mixture, but it mixes them expertly with the humble tools of the cinematic craft.

It’s impossible not to smile at the idiocy of every character, from the former punk singer recruit to the gun-shy ex-soldier.

The violence is not soft, and blood gallons flow from the vampire bites, yet always ending with a smile.

Fortunately, the special effects are all old school, with great makeup for the monsters and the scary vampire clown.

The Night Watchmen cites numerous classics well before 2017, from generational movies like Animal House to horror masterpieces like Nosferatu.

The clown is as evil as Stephen King‘s It, a fearsome villain that is always essential to such stories.

In the end, the glue holding everything together is the characters’ friendliness, simple workers like the man next door.

Every scene has a little idea that deserves applause, between garlic sandwiches and bags of marijuana used as a weapon.

So if you’re looking for a story to take seriously, keep away; we’re talking pure, hilarious entertainment here.

A small cast and production for a big result

Without a doubt, we are talking about a low-budget production, without big means or big names.

The only exception is Hollywood veteran James Remar, who you may know as Dexter‘s father in the series of the same name.

After cults like The Warriors and 48 Hours, this star is also a producer besides having a small part.

The director makes the most of every situation to embroider moments of bloody horror and then laugh about it without thinking.

As mentioned, the main characters are the beating heart of this comedy, starting with the young Max Gray Wilbur.

A boy still searching his way after disappointments and failures, who unknowingly must fight for the world’s destiny.

Alongside him, the more mature but equally idiotic Ken Arnold, Dan DeLuca, and Kevin Jiggetts, bored and lazy handyman guardians.

Ironically they are supposed to instruct him in his job, but they don’t feel like doing theirs either.

Finally, like any horror comedy, there must be the hot girl, in this case the beautiful brunette Kara Luiz.

Of course, everyone courts her, from the slimy boss to the guards always spying her on the cameras.

But when there’s a fight to be had, she certainly doesn’t back down, tearing vampires to shreds without much ado.

To sum it up, The Night Watchmen is a deliberately trashy but not stupid movie, absolutely a must-see if you missed it in 2017.

After all, it is okay to laugh at monsters, at least in the theater, since they are unfortunately not funny in the real world.