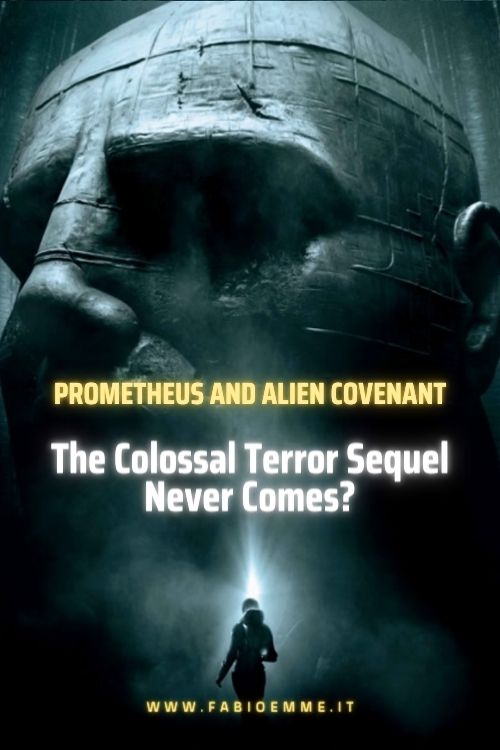 After 40 years of international success, the famous Alien movie saga seems to be over after Prometheus and Alien Covenant.

Loving horror and Sci-Fi since I was young, I always appreciated how they combined the two genres perfectly.

Being Italian, I appreciate that the poor director Mario Bava found new life in an American blockbuster.

Indeed, the whole saga starts and is based entirely on an Italian film from 1965, The Demon Planet.

A story where, indeed, a spaceship followed a signal to an unknown planet found a new and hostile alien race.

In Bava’s movie, however, the aliens were multidimensional beings that took possession of humans in an almost demonic way.

Instead, Alien is a parasite growing inside the human body, exploding then in the form of a dangerous xenomorph predator.

After four films and two crossovers with the equally bloody Predator, the saga seemed to be on standby indefinitely.

For a long time, there was talk of a reboot to follow the second chapter, whose direction was to be the talented Neill Blomkamp.

A project disappeared in the meanders of the offices of power in Hollywood, where they then decided to change course returning to the director of the first episode, Ridley Scott.

In 2012 Prometheus arrived in theaters, and five years later, the second part of a trilogy never completed, Alien: Covenant.

Beginning many years before the events of Alien, this movie closely follows the long space journey of the starship Prometheus.

Its crew is a scientific expedition in search of the origins of humanity, in the pay of the megalomaniac president of a major corporation.

Long before, indeed, two young archaeologists had found clues of prehistoric cultures that all paid homage to the same constellation.

Since these primitive men couldn’t see that far into space, they theorized the entire human species came from that planet.

Therefore, the expedition looks for a race they call Engineers, who allegedly designed the DNA behind life on Earth.

Once on the planet, the Prometheus lands in a vast area on a long straight stretch through the mountains.

They determine that conformation cannot be natural, following the road to a large circular structure half-buried in the ground.

Inside that place, they find a series of long corridors where the gigantic corpses of some alien creatures lie.

From their disposition, they understand that they were fleeing from something, a dangerous threat that may still be alive.

These experiments by the Engineers attack and mutate the DNA they infect, then produce terrible hybrids with murderous instincts.

When some expedition members mutate into dangerous killer beasts, the scientists decide that this terrible weapon must never reach Earth.

The second movie of this (potential) trilogy is Alien: Covenant, which takes place ten years after the events of Prometheus.

This time we follow the starship Covenant, whose crew sleeps in cryostasis during the long journey to colonize a planet.

Unfortunately, an accident wakes up the crew and causes a terrible fire killing many passengers and the ship’s captain.

While carrying out repairs, the other officers discover a radio signal with a woman singing a John Denver song.

At that point, some of them board a scout ship, descending onto the planet’s surface to investigate.

The natural habitat there seems favorable for establishing a colony, saving them another long seven years of travel.

But while they are scouting the area and doing some analysis, some officers become infected with spores and mutate into murderous monsters.

While fighting for their lives, a mysterious hooded figure comes to their rescue and takes them to a mountain shelter.

He is the android from Prometheus, the only survivor and a woman who was also singing in the radio signal.

They then discover that the planet they are on is none other than the lost paradise of the Engineers, whose corpses crowd the great plain in front of the shelter.

As they try to contact the spaceship orbiting over their heads, the officers begin to suspect their mysterious savior.

Indeed, the android initially must serve its master and has no moral obligation to anyone after his death.

Whats the future for the most famous alien in cinema history?

After Prometheus and Alien Covenant is interrupted, at least for now, the long epic of movies about the deadliest alien of all time.

The rumor is that Ridley Scott has already prepared a final prequel entitled Alien: Awakening for several years.

Theoretically, this last chapter should close the time circle ending exactly where the first Alien began, with the arrival of the spaceship Nostromo.

Unfortunately, in the meantime, there have been several disputes over property rights to the franchise, and the project seems to have never really begun.

In addition, Scott had to deal with mixed results from critics and audiences, which seem to have compromised the future of what seemed like the inevitable third chapter.

Indeed, only Prometheus earned well at the box office between these two movies, while Alien Covenant barely covered its high production costs.

Leaving aside the money and talking only about cinema, I greatly appreciated the new narrative turn chosen by the director.

These prequels keep the classic elements of the saga, such as the horror and murderous alien versus the beautiful and strong female protagonist.

At the same time, the story introduces a series of intriguing philosophical and sci-fi reflections on the origins and fate of humanity.

All this comes from great directors like Ridley Scott to James Cameron, up to David Fincher and Jean-Pierre Jeunet.

Personally, therefore, I can not do anything but cross my fingers, hoping that the will of the authors to conclude his work is stronger than the simple numbers at the box office.

What do you think instead? Would you like to have the third prequel, or are you among those who regretted even seeing the first two?