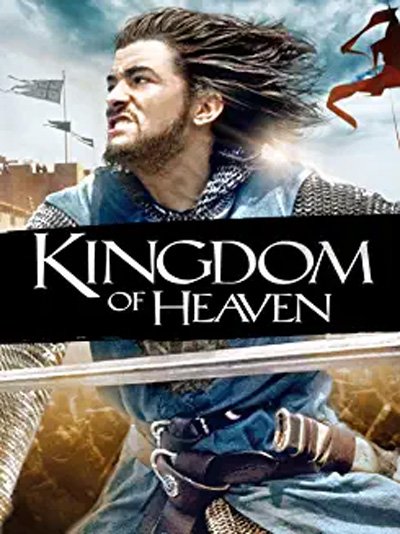 Kingdom Of Heaven is a historical film set during the wars between Christians and Muslims in the late 12th century.

The protagonist begins the story as a humble blacksmith in a small French village, far from the power struggles in the land of the Crusades.

But suddenly, he has to flee because he has killed a priest who insulted his late wife during a temper tantrum.

Looking for a place to hide, he will find his birth father, who convinces him to join his soldiers in defense of Jerusalem.

Once arrived in the holy land, the French guards kill this handful of men, and he is the only survivor.

Before dying, he makes him a knight, leaving him his property and the duty to fight for the helpless weak.

So he begins to wander in the desert, clashing with a Muslim lord and his servant in a deadly fight.

When he arrives in Jerusalem, he surprisingly discovers famous because he killed an essential ally of the enemy sultan, Saladin.

The other knights recognize him as his father’s heir, and King Baldwin sends him to reclaim his rightful property.

Laboriously, he restores his domain’s dry and poor lands, passing much time with the beautiful princess Sibyl.

However, the king of Jerusalem is gravely ill, and when he dies, the princess’ brutal husband succeeds him.

Leading a group of knights thirsty for power and wealth, the man declares a foolish war against Saladin, miserably losing.

At that point, the former humble blacksmith must organize the city’s defense, waiting for the inevitable Muslim army response.

Kingdom Of Heaven is a film that contains many historical inaccuracies, exaggerating specific figures while mitigating others.

Nevertheless, the message of director Ridley Scott arrives clear and robust without leaving any doubt.

This story expresses the desire of different cultures to live together in peace, despite the greed and cruelty of men.

The plot does not stand for Christians or Muslims, focusing on the characters instead of the religions.

As the superb Jeremy Irons says, the wildest massacres in history took place behind the excuse of religion.

Getting back to the actual film, Kingdom Of Heaven has simply fabulous staging, costumes, and cinematography.

If, as we have said, the events’ narrative might be debatable, the visual wonder before our eyes is indisputable.

Ridley Scott and his crew do a superb job reconstructing every little detail of that distant era.

The violence and cruelty of the Crusaders match the beautiful architecture, armor, and elegant clothing of the period.

From desert or woodland encampments to the Jerusalem towers, every brick in this world is put in the right place.

Then let’s talk about the great battles staged inside and outside the city’s walls that the Muslims put under a long siege.

We can see up close the weapons, war engineering, and strategies of those times in the long and mighty fight scenes.

This movie isn’t for historical academics, yet succeeds in breathing the air and dust of the distant Crusades days.

A lesson we should all learn, for better or worse, is to see what men can and will do to other men.

A titanic cast for a endless tragic epic

Ridley Scott‘s direction is simply superb, surpassing even the magnificence of Gladiator in certain moments.

The cast is top-notch, with Orlando Bloom as the protagonist, young and inexperienced, thrown into the bitter war between religions.

Now ready to become a man, from the tragedy of the death of his woman, he will find an opportunity for a new life.

Alongside him is Eva Green as the clever and sexy princess, introducing him to the elaborate politics of Jerusalem.

Should we want to find a flaw, Liam Neeson‘s encounter is intense and suggestive but perhaps too short and quick.

Nevertheless, the Irish actor conquers his importance, transforming the humble blacksmith into a fearless knight quickly.

As mentioned, we also have an excellent Jeremy Irons, a warrior of honor who becomes a sort of putative father for the protagonist.

With his fierce rockets and attacks on the Muslim population, the madman provoked the Sultan’s reaction to the point of the war.

Finally, we mention an unrecognizable Edward Norton as the wise King Baldwin, who produces a powerful and memorable performance.

Historically many things will be wrong, but what is undeniably true is the pacifist desire that comes out of this story.

This is Kingdom of Heaven: a film where between Muslims and Christians, the real victims finally are always innocent civilians.

Sadly it is a contemporary theme since these religious struggles are still ongoing today, almost a thousand years later.