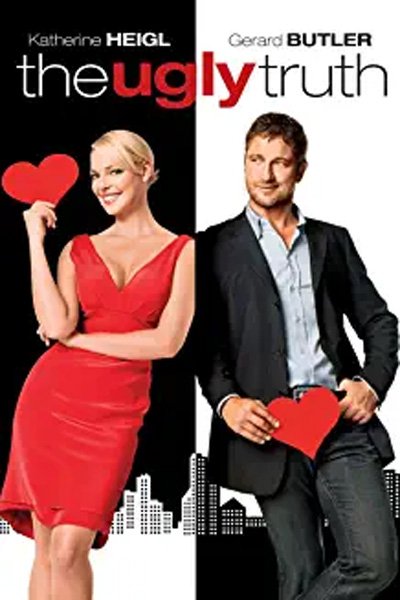 The Ugly Truth is a movie that re-proposes the sexes’ war in a television context, inevitably drifting to romantic comedy.

A young producer is in a work crisis, seeing her programs collapse in the ratings compared to the competition.

Her personal situation is no better; she still lives alone with her cat after many dates ended in disappointment.

One evening while zapping, she finds a talk show provocateur answering directly any question of a sexual or sentimental nature.

She phones him trying to reprimand him, but the conversation ends with her humiliating defeat on live television.

As if that were not enough, her boss hired the same provocateur the following day to win back the audience.

Of course, she hates him from the start, setting the goal of getting him fired as soon as possible.

But despite his vulgar and irritating ways of shoving the truth in other people’s faces, the network’s numbers start to climb again.

His boss is thrilled, and he wins the trust and respect of all his colleagues.

As they begin to date more closely, she is struck by his genuine sincerity becomes his friend.

She will even have such confidence in him to get advice on seducing her charming new neighbor.

But after they become so intimate, she will realize that perhaps he is not the faithful companion she desires.

In the meantime, however, the provocateur’s great success brings him to the attention of rival networks that try to hire him.

At that point, he will have to choose between the girl and a new, better-paid, and more prestigious job.

I’ve read a lot of harsh criticism about The Ugly Truth, but I think it’s useless to pretend that a movie like this is different from what it is.

This romantic comedy certainly doesn’t want to be complex or challenging cinema, but just pure entertainment.

It succeeds very well, with a simple story that flows smoothly between jokes and good feelings.

The humorous sketches between the main characters are hilarious, alternating sexy and comical with more sweet and romantic moments.

Equally functional is the story’s rhythm, which travels without dead moments, ensuring an endless series of moments with laughter.

If I had to make a complaint, maybe the supporting characters could have been better described, which is irrelevant.

On the contrary, the protagonists possess pleasant personalities, and their interactions make a story that is otherwise somewhat trite.

The romance grows predictably but equally enjoyable and great entertainment.

Perhaps you could dare to attack the hypocritical television system more fiercely, but after all, you can not have everything.

Anyway, I don’t want to leave you in doubt; I enjoyed it very much, even more than I thought I would.

Among the dozens of comedies that come out every year, a movie like The Ugly Truth has that extra touch to stand out.

Indeed, despite being largely politically correct, there are also some funny (but not exaggerated) vulgarities and overtly sexual moments.

Among all, I would put the restaurant moment with Katherine Heigl and the vibrating panties, both sexy and comical.

As mentioned, definitely the best aspect of The Ugly Truth is the two starring movie stars.

Katherine Heigl is, as usual, beautiful and sunny, in a somewhat stiff role of the perfect and uncompromising executive.

The actress is the one who has to do the most challenging work, changing over time to fit the style of her new loved/hated rival.

For his part, Gerard Butler is an unstoppable volcano of jokes, pranks, and alleged truths that won’t allow any discussion.

After many heroes or madman roles like 300 or Law Abiding Citizen, it is finally pleasant to watch the actor in the lightest and funniest part.

The experience between these celebrities is immediate, carrying on the I love / I hate you thing with good chemistry.

Robert Luketic wisely directs this genuine sentimental comedy, not daring but without doing anything wrong.

He skillfully controls the comedy’s moments, appropriately allowing the actors to bring their characters to life.

I still repeat that I have read some criticisms that I did not understand, such as excessive vulgarity or masculinism.

Honestly, it seems that someone wants to look for problems where there are not, in simple and pure entertainment.

All right, the story is perhaps a bit trivial, and we have already seen it many other times; I do not deny it.

However, it is also true that we must not necessarily witness a masterpiece every time we go into a cinema.

The Ugly Truth is a movie that someone may not like, but it still made over 300 million dollars at the box office.

I recommend it to all those who want an evening of joy and feelings, maybe even better watching it as a couple hugging each other.