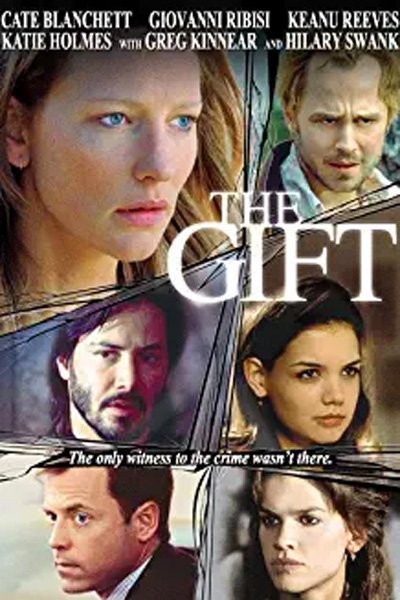 Before launching the famous Spider-Man movie trilogy, Sam Raimi brought the excellent supernatural thriller The Gift to theaters in 2000.

The protagonist is a psychic who lives in a small community, hated and ridiculed by most people.

Her power is a gift her mother also had, allowing her to know things about other people’s pasts and futures.

A loyal group of clients relies on his predictions, including the beat-up wife of a violent and ignorant racist.

The man repeatedly threatens her, furious because he believes she advises his wife to leave him.

Fearing that he will hurt her children, she turns to the police, who can’t do much about it.

Until one day, she has a vision about a girl like a spirit floating in the air looking for help.

This girl is one of the wealthiest families in town, but she secretly leads a very uninhibited life.

Because she believes her violent enemy is involved, she leads the authorities to his property, where her dream occurred.

Searching inside the lake nearby, they find the girl’s dead body, whose family had recently reported her missing.

He ends up in prison, and when his relationship with the victim emerges, the court convicts him without hesitation.

Although she hates him deeply, the psychic begins to doubt that she has led the police to the wrong man.

Alone against everyone, she fears the killer is still free and watching her prevent getting to the truth.

The Gift is a thrilling 2000 movie with a magical and, at times, even horror atmosphere constantly permeating the story.

Some good insights and twists are present in the investigation sections in a slow but never dull narrative.

It’s very effective the description of a small rural ecosystem made of prejudice, ignorance, and racism.

In this context, the fantasy element of the woman’s supernatural powers is what people fear and hate about her.

As mentioned, there are horror moments, but not violent and bloody, so anyone who doesn’t like them can rest easy.

The feeling of tension and danger never leaves us throughout the story, always leaving us in doubt about what is going on.

However, the best part is the psychic’s vision scenes, where Sam Raimi can exploit his talent to the fullest.

The director can unleash his imagination while not reaching the fascinating technical virtuosity of the various Evil Dead or Spider-Man.

A further positive note is in editing the plot’s various parts, chronicling a murder thriller without getting too complicated.

The color and light balance is fascinating, bringing The Gift of 2000 closer to a David Lynch movie than an Alfred Hitchcock one.

The mystery doesn’t explain much about the woman’s magic and power, yet perhaps that’s not the most important thing.

I think the director’s message is about a woman who people marginalize precisely because she is special.

The loneliness of her gift is a huge burden, but she never lets anguish overcome her and faces the world with courage.

A great cast for a little thriller gem

Cate Blanchett is a sumptuous lead, playing with beauty and fragility a woman with the blessing/curse of the gift of prescience.

Besides her fellow citizens’ discontent, she deals with dreams and ghosts that perpetually haunt her from the past.

Moreover, it is one of the few times that Keanu Reeves plays the role of the villain, a vulgar and ignorant man with whom it is impossible to reason.

However, the famous actor perfectly fits the unusual role of the abusive husband, whose presence makes anyone uncomfortable.

As a young wife victim of his marriage, we then have a young and talented (and at the time not yet famous) Hilary Swank.

The actress will wait a few more years, but she will also succeed with Clint Eastwood‘s excellent Million Dollar Baby.

In his struggle against the psychic, Reeves will have to face the disturbed Giovanni Ribisi.

His character is the most interesting in the whole story, a man as fragile as he is dangerous for his sudden mood swings.

Finally, the beautiful Katie Holmes, the famous face of Dawson Creek, plays the victim who triggers this thriller.

About to marry the sober and elegant Greg Kinnear, the girl disappears without a trace.

With this film, Sam Raimi seeks success after the expensive flop of For Love of the Game.

The brilliant director returns to a comfortable genre with a magical story with small, deft horror moments.

Thanks to the competent cast, he builds a believable small-world functional to the evolution of the thriller.

The Gift grossed very well worldwide in 2000, especially considering it is a meager budget movie.

It will be a good turning point for the director, who returns to blockbusters by later producing his famous Spider-Man trilogy.