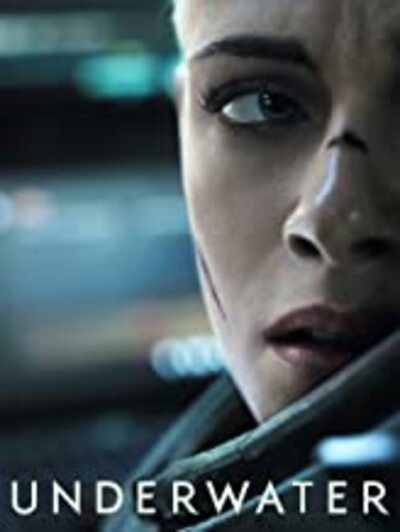 Underwater is a thrilling 2020 action/horror movie by William Eubank, a young and enthusiastic science fiction filmmaker.

The story occurs deep underwater in a scientific research base in the Mariana Trench.

A young girl working as an engineer is about to start her shift when a violent earthquake shakes the entire facility.

Water floods most of the rooms and hallways, killing most workers instantly.

However, a few crew members survive and manage to regroup, searching for a way out.

Their only hope is to reach the central control station, where the few working capsules return to the surface.

Unfortunately, the road they face is mainly in the dark and underwater, and the air and power for their survival suits are running out.

Even worse, they’ll soon discover that these obstacles won’t be their worst problems.

Indeed, due to their company’s excavation, a terrible threat has emerged from the depths of the earth.

These creatures have been sleeping for thousands of years and are definitely waking up in a bad mood.

To take revenge, they begin to hunt and mercilessly slaughter the few earthquake survivors.

If they initially flee from these monsters, they are literally petrified with terror when seeing where they come from.

They all are part of an immensely larger being, almost an underwater god from which they emerge by the thousands.

A war will begin between humans and these ancient nameless monsters in the darkness of those remote depths.

Underwater is one of the unknown action horror movies of 2020, released excessively little in theaters worldwide.

It is a true shame as it is spectacular, effectively telling a thrilling story of extreme survival.

The pace is fast, with a remarkable succession of situations and characters running away from danger.

Although they face practical problems at the beginning, the challenge assumes the shades of the impossible very soon.

Indeed, these monsters in the dark are perfect and implacable hunters, driven by a primordial hatred towards the human species.

The big company makes the mistake of disturbing their long sleep by invading their home with digging drills.

The few characters who survive then become the emblem of the human will to never stop in front of anything.

Certainly, the plot echoes some of the great classics of the genre, such as The Abyss or Leviathan, but it has some original ideas.

William Eubank does not waste too much time getting into the adventure without a long and unnecessary preface.

Most of the tense scenes occur in perfect darkness, where the director plays with the light between what we can’t see.

When we then get to see the mother/father creature of these monsters, this horror becomes almost Lovecraftian.

Its apocalyptic power has unquestionably appeal, a fury of the sea that emerges enraged seeking revenge.

The perfect metaphor reminds us how small and humble we should be to nature, the mother of us all.

But as we know and see every day, all too well, in reality, we are the ones who hurt the world around us.

The main protagonist of Underwater is Kristen Stewart, 2020, reminiscent of the movie masculine clean-shaven look of Sigourney Weaver in 1992 Alien 3.

Her slender body looks both fragile and muscular, the one of a beautiful girl who isn’t afraid of strenuous exertion.

Her captain is the intrepid Vincent Cassel, who desperately leads the diminishing group of survivors searching for salvation.

Perhaps not the best performance of his career for the famous French actor, who nonetheless contributes by giving the movie an international appeal.

Undoubtedly, the best part of 2020’s Underwater is its direction, in the hands of Sci-Fi movie expert William Eubank.

The director’s filmography consists of only a few titles so far, but they are all of excellent quality.

Indeed, he also directed 2014’s The Signal, another intriguing sci-fi with aliens, and 2011’s fascinating Love.

His following projects include yet another installment of Paranormal Activity, which I’ve never been thrilled with.

However, I’ll try to watch it without prejudice, and we’ll see if his direction will finally succeed in giving a true horror feel to the saga.

Underwater had a decent audience in theaters around the world, unfortunately not enough to cover its production costs.

This is a pity for an author who has created his own personal and practical style in the last ten years and whose every film I recommend without hesitation.

However, since he is still very young, I am sure that Eubank will still have plenty of time to amaze us by continuing to improve his filmography.