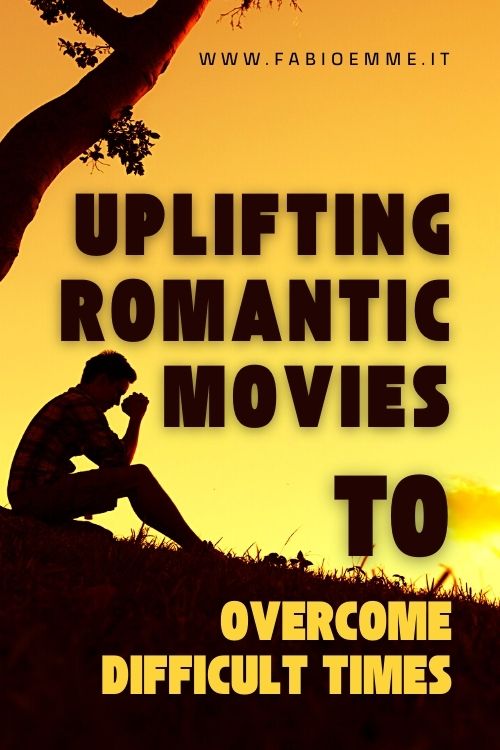 How small it may seem to watch a movie when you’re sad and discouraged, yet that’s precisely why the cinematic art is so romantic and wonderfully uplifting.

Through the many faces of its countless genres and nuances, we can feel the emotions we want at any time.

It’s no accident that Shakespeare said that we are made of the same stuff as dreams.

As always, the supreme English poet’s words are open to any interpretation, but that’s how I want to see them.

No matter what passion you follow in your life, from movies to music or sports, or whatever it is: do it with joy and without hesitation.

Because in the end, the first best friend in your life is yourself, so love and treat yourself with care.

To help you feel better in the darkest moments, let me recommend three romantic, uplifting movies.

We begin the treatment with a French film of rare sensitivity and delicacy.

After a while, just talking about it is not enough, so they decide to meet in a small hotel.

Their faces emerge from the crowd as ordinary people, with nothing particular or unique compared to everyone else.

She is a mature woman, small and graceful, with the severe and reserved look of a family’s mother.

On the other hand, he is a bit bigger, with a not athletic physique but an honest and sincere face.

We follow the story when it is already over, with the two characters separately telling their experience to an unknown interviewer.

Likewise, we never know what sexual fantasies they were giving vent to, as we remain outside the door during their relationships.

Instead, they both found even more than what they were looking for in a simple casual relationship.

It is a soul mate, a companion with whom to talk about everything without shame, lies, or embarrassing silences.

Someone to share their little phobias and fixations to find out that they’re nothing so terrible.

And then, finally, to have uninhibited sex for pure pleasure without guilt complexes but rather laughing about it.

But love is also made to plan a future together and not only to live the present.

So when the two say goodbye for the last time, we can see a shadow of regret on their faces, for what could have been but never will be.

The strange language of love between adults

Despite the uplifting provocative title, Une liaison pornographique, there is absolutely no pornography in this movie.

The chemistry and love language between the two leads, Nathalie Baye and Sergi López, is powerful and immediate.

Both are no longer kids, so they willingly skip the seduction game’s most awkward and hypocritical part.

This honest sincerity is even more evident in their posthumous confessions in front of the camera.

Even though the story takes place in a small secret hotel, their tale is not sleazy but sweet and intimate.

Right from the start, these common and inconspicuous surroundings become as familiar and welcoming as the home of an old friend.

Starting from the café where they meet in the morning, talking amiably like two acquaintances, then going up to the room where they undress while lying together.

Finally, they say goodbye to each other at the entrance to the subway and make an appointment for next week.

Frédéric Fonteyne directs with simple manners and a static direction, within poor locations and with little musical accompaniment.

Elegance in this film delicately emerges between the silences and the glances of these two protagonists of a clandestine love story.

The director is on the sidelines, silently spying on a couple living in the moment without expecting anything else.

Finally, the end comes among the street’s anonymous faces, the same where they meet for their first clandestine encounter.

But after all this time, it still uplifting my spirits on my darkest days, remaining one of the most romantic movies I have ever seen.

We then move to a private high school in New England from the capital of French romance for a funnier story.

Words and Pictures begin with a new art teacher arriving at this school, a woman who was also a famous painter in her time.

Immediately she makes the acquaintance of another teacher, a famous bestselling author who teaches literature.

The two immediately begin to challenge each other in a series of petty disputes, even involving their students in their bickering.

But when it comes to establishing which of painting and writing is the more effective artistic medium, it’s open warfare.

By mutually stimulating their creativity, the school becomes a battleground to challenge each other to paintings and poems.

Their relationship becomes increasingly intimate and romantic as they each try to surpass the other’s artistic prowess.

But both of their problems eventually alienate them, even though it’s clear they belong together.

Indeed, the man is in danger of losing his job because of his intractable character and severe alcoholism.

On the other hand, the woman lives with painful hands arthritis, preventing her from working on her paintings.

Meanwhile, the students get to challenge each other a little beyond the limit, openly harassing each other during class.

At that point, the two teachers will have to make peace between the two sides, trying to help each other solve their problems once and for all.

However, to truly change, they will have to go through difficult times with harsh consequences on the lives of both.

Love and art against everything and everyone

This funny romantic comedy lives mainly on the hilarious verbal duets between the two main characters.

The subject matter is fascinating, the eternal struggle between the power of words versus the expressiveness of images.

It is a bit disappointing that it strays too much into the personal diatribes of the characters; otherwise, it could have been even better.

However, the story remains interesting and never dull, mainly thanks to the excellent cast and interpretation.

Clive Owen is a hilarious and volcanic professor who verbally oppresses all his interlocutors.

Separated from his family, he also alienates all his colleagues who are tired of putting up with his constant drunkenness.

Juliette Binoche is a fierce painter defending her art and spurring her students to do better and better.

This artist does not tolerate mediocrity and demands that everyone make the most of their talent, repeatedly trying until exhausted.

Although she doesn’t seem to be able to stand the long-winded professor at first, the challenge exhilarates her, prompting her to put herself out there again.

Regardless, Words and Pictures is a non-trivial romantic movie uplifting our mood by pushing us to get attached to its characters.
In short, the story is a wide-ranging portrait of love and art, which often clash in painful and destructive ways.

For today’s final film, we’re still staying in America, but we’re back in the French air with a modern remake of the classic Cyrano de Bergerac.

Instead of the famous and curmudgeonly swordsman here, we have the local fire department captain.

He is a funny, wise man who women like and is pretty much friends with the entire town.

Everything begins when the beautiful Roxanne, a young astronomer looking to name a meteor, arrives in town.

The man feels an immediate and irresistible attraction for her but hesitates to make a move by declaring his love.

Indeed, like the famous French comedy’s protagonist, he has a massive nose regarding which he is highly susceptible.

Moreover, the girl falls in love with another fireman, a young and handsome guy who recently arrived in town.

This boy, however, is an ignorant klutz and is panicked every time he has to talk to her.

Therefore, he asks his boss for help in wooing her, not knowing that he has a crush on her.

The man then begins to write poems that he sends to the beauty in the boy’s name, quickly winning the heart of the beautiful scientist.

Unfortunately for all of them, this deception can obviously only go so far.

Quickly, the girl realizes that the words that warm her heart are from someone else.

At that point, this lie theater shall fall, and the man will no longer have anyone to hide behind.

An entertaining imitation of an immortal masterpiece

Honestly, if this sparkling, funny romantic movie fails to uplift your spirits, I really don’t know what else to recommend.

Steve Martin is an exceptional leading man with a machine-gun-like speech and a neurotic, irresistible mimicry.

Although he is intelligent and funny, he immediately rages when someone tries to say something about his nose.

Despite not having a partner, he knows the languages of romance perfectly, as he proves by melting the heart of the beautiful one with the sweetness of his poetry.

Daryl Hannah is a fantastic modern Roxanne, intelligent and sunny, who falls in love with the wrong man through deception.

The actress makes the most of her status as a sex symbol and the fame from Blade Runner.

Finally, Rick Rossovich perfectly plays the role of the protagonist’s comic sidekick in the naive third side of the love triangle.

But despite being a somewhat ignorant simpleton, his character also has dignity and will be the one who finally resolves this complicated love triangle.

Another Fred Schepisi‘s direction, certainly not memorable, but he does his job without doing too much damage.

Compared to the original French work, we obviously have the happy ending, as often happens with big Hollywood productions.

Therefore, this romantic movie will never be a masterpiece compared to Cyrano de Bergerac, but uplifting the mood with a smile has very few rivals.