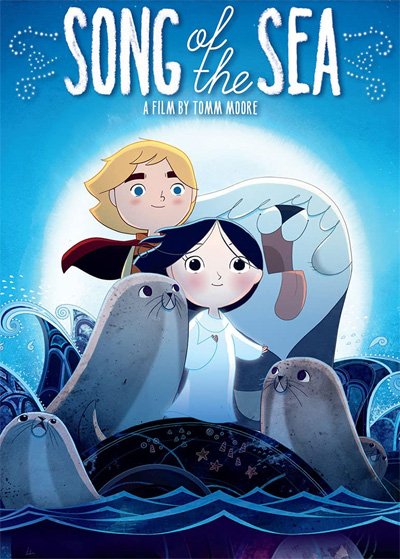 Song Of The Sea is a 2014 animation movie that takes inspiration from an Irish mythological tale.

This fable narrates the story of a family living on the coast of Ireland inside an old lighthouse.

The lighthouse keeper’s father lives with his two children and a large, playful dog.

There is no good relationship between the children, as the mother died on the day the daughter was born.

Foolishly, the older brother continually blames his little sister for the episode so many years earlier.

However, the little girl has within her, waiting to unravel, the same magic as her mother.

However, from faraway Dublin, the grandmother arrives and demands custody of the two children from their father.

Despite their protests, the old and irascible lady takes the children to live with her in the city.

But on the first night, taking advantage of the Halloween festivities, the children flee the house.

They got from their mother when they play an old shell, and some magical creatures rush to help them.

Meanwhile, some evil owls try to attack them, chasing them down the street.

At that point, brother and sister realize they are in the middle of a struggle lasting for a long time, which has now got to a decisive moment.

If they can’t return to the lighthouse by morning, the little girl and all the other magical creatures will have no hope to survive.

2014’s Song Of The Sea is a movie appropriate not only for children but also fascinating for adults.

These seemingly simpler drawings have an unattainable depth and emotionality.

Also, as always, animation movies are perfect for narrating the old-time fairy tales by bringing them to our present.

It is a funny and sad story where cute magical creatures live in harmony with nature by transforming themselves into animals.

Sweet poetry and sorrowful cruelty blend together with the children’s growth in their narrative journey.

Two children can’t stand each other at first, but end up coming together fighting for a common cause.

The villain is also exciting, a witch who deprives others and herself of feelings to not suffer from her memories.

So the villain is not to be fought but to be saved, teaching her to learn from her experience that she cannot accept.

In short, in the end, Song Of The Sea of 2014 is a movie that, at certain times, will make children cry as much as adults.

Because whether you want it to or not, we are all searching for something in life that we can’t explain but feel is missing.

In the end, it’s family that matters

Tomm Moore directs the second chapter of a trilogy that, sooner or later, I intend to cover completely.

The director chooses to use a slow but never boring rhythm, as constant as the waves breaking on the coast of Ireland.

Equally magical is the beautiful music by Bruno Coulais, which accompanies these two children on their night-long journey.

But next to the magic of this story is the believable suffering humanity of its characters.

This suffering, especially for adults, will be cured by children’s splendid naivety and purity.

In addition, to dub the voices of this world, we have an excellent cast of international caliber.

Above all, I would put the great Brendan Gleeson, always at ease in any role for Hollywood and its surroundings.

The actor plays a father who loves his children, but the loss of his wife has made him apathetic and silent.

Moreover, the arrival of his mother, voiced by an outstanding Fionnula Flanagan, doesn’t help him at all.

The older woman blames him for the conditions in which he makes his children live and takes them away from him without him objecting.

Summing up, Song Of The Sea is a beautiful 2014 animated movie, perfect for a family night out.