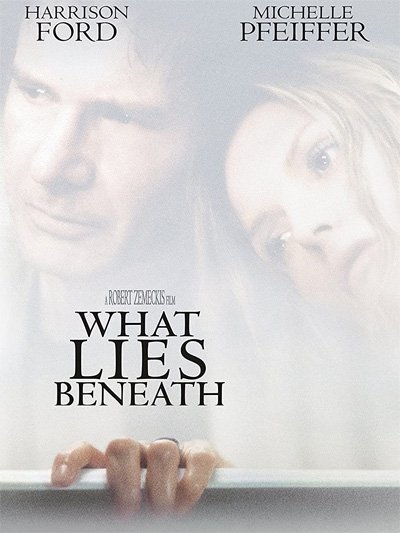 What Lies Beneath is an intriguing 2000 supernatural thriller directed by the great American movie maker Robert Zemeckis.

The story revolves around a married couple who live in a large mansion near a lake.

After many years they are alone again, as their young daughter has just left for college.

Initially, their newfound intimacy seems to be positive, igniting the passion between them once again.

However, one night, they hear their new neighbors fighting and screaming at the top of their lungs.

Shortly after that, they see the man leave the house in a hurry, loading something into the trunk of his car.

A few days later, the wife begins to feel an indefinable and disturbing presence inside the house.

Occasionally she finds open doors she is sure to have closed and in the lake water seems to see frightening reflections.

At that point, she becomes convinced that the woman next door is dead and her ghost is trying to call for help.

Her husband won’t believe this story, thinking their daughter’s distance stresses her out.

He suggests that she go to a psychologist for treatment, but unfortunately, the therapy does not yield any results.

When he too witnesses some impossible and inexplicable events, he decides to investigate with his wife what happened.

But this ghost hides an incredible truth that is so terrifying his wife will struggle to accept it.

A resounding and unexpected international success

By the late 1990s, Robert Zemeckis had almost completed Cast Away, but he couldn’t quite finish it.

Indeed, he must have waited for Tom Hanks to lose weight for a three years time lapse in the story.

During the year the great actor followed a strict diet regime, the director shot another movie that would come out in 2000, What Lies Beneath.

He had been planning to pay homage to Alfred Hitchcock with a family thriller for some time, and this was the perfect opportunity.

It’s no coincidence that the first half of this story is very similar to Rear Window, a great masterpiece of technique and suspense from 1954.

Replacing James Stewart, we have the beautiful Michelle Pfeiffer, the sexy mom neighbor we all wish for.

Initially confident in her life and family, everything changes by spying increasingly obsessively on her neighbor.

This psychological breakdown accompanies the story in a superlative climax of tension and twists.

The characters are few but essential, with each role effectively playing its part on the plot board.

A plot that pleasantly and stylishly deceives the viewer, like a game of mirrors in a high-class circus.

Indeed, the clues that we discover lead us to look in one direction and then deviate abruptly in the final half-hour.

In short, What Lies Beneath is a two-sided film, initially a mysterious fantasy that later becomes a no-holds-barred survival thriller.

A versatile and original blockbuster director

Robert Zemeckis abandons the cheerful and playful style of his famous hits like Forrest Gump or Back to the Future.

Indeed, the 2000’s What Lies Beneath has Alfred Hitchcock‘s movies’ slow pace and sumptuous elegance.

Zemeckis’ technique marries this cinematic language to perfection, exalting the director’s skill as never before.

Not to mention Alan Silvestri‘s influential music, which is also an homage to Hitchcock’s masterpieces like Psycho.

In addition, as the final ingredient for an already perfect recipe, we have a simply exceptional cast.

Michelle Pfeiffer achieves some of the highest pinnacles of her talent with a performance to remember forever.

Then in her early forties, the actress would grow from one of Hollywood’s loveliest girls to a mature, accomplished woman.

Her performance ranges from hysteria to denial and pining for her husband’s desires, yet only to a certain extent.

I apologize if this is a plot spoiler; however, his part in this story truly is scary all the way through.

We’ve always seen this actor as heroic or, at most, a bad boy with a good soul, so this was a genuine revelation.

In conclusion, while it started as a transitional movie, What Lies Beneath was a 2000 huge international success.

A story that mixes thriller, fantasy, and even horror flawlessly, surprising the spectator minute after minute.