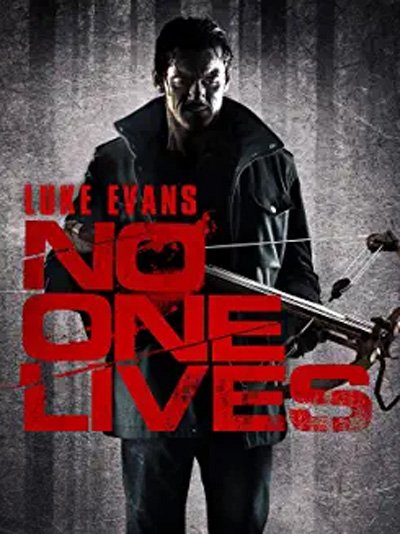 No One Lives is a 2012 horror movie, perfect for anyone looking for an evening with some splatter and action.

The story begins with a couple traveling to move house after leaving their old town.

After many consecutive hours on the road, the man is tired of driving and stops at a hotel to rest.

While having dinner at a nearby restaurant, they encounter a gang of thugs who annoy them.

Unfortunately, they are trying to ignore them because they cannot know that these are dangerous criminals.

Indeed, this gang massacred an entire family who caught them during a robbery on the same day.

The couple drives away believing that the incident is over, but these criminals ram them off the road with their car.

They both wake up tied up in front of each other while a large man holds a knife to the woman’s throat.

Incredibly, she voluntarily leans over the blade, killing herself and unleashing the fury of her man.

In a blink of an eye, in turn, he kills the attacker without any difficulty.

The gang soon discovers that he is not just anyone but a serial killer who loves mass murder.

Hiding in the trunk of his car is a young girl, the sole survivor of his latest massacre.

She warns them that this maniac is a flawless killing machine and won’t stop until no one is left alive.

I’ll preface by saying although No One Lives from 2012 is a movie with a lot of action, it also has some impressive splatter horror scenes.

Be aware of this before pressing play with your kids because there will be much violence and blood here.

The plot format is somewhat the classic one that we have already seen hundreds of times.

In short, we have the usual victims who can not escape and the maniac who takes them out one by one.

What makes a huge difference is these victims’ premise, who initially look like the executioners.

However, when they capture those they think are easy prey, they make a huge mistake.

From the first scenes, we immediately realize that there is something strange about this man/woman relationship.

However, we can’t explain it because these characters are very silent yet within a disturbing atmosphere.

Everything changes when the serial killer unleashes his violence by showing who he really is.

Indeed, it is precisely when killing where this man talks the most, explaining his insane perspective to his victims.

What we don’t understand from his delirious monologues is explained to us by the young surviving girl who was his prisoner.

This relationship of sadistic intimacy should teach her to get tougher, prompting her repeatedly to fight back.

To summarize, No One Lives is a 2012 movie that is easy to follow but has some deep facets to understand.

We hardly remember Ryûhei Kitamura as Akira Kurosawa, but he certainly knows his craft well.

The director sets out to entertain his audience quite simply, and in my opinion, he succeeds in a big way.

The plot offers few but well-settled narrative twists, keeping the tension high throughout the movie.

Although the characters are stereotypes in a way, they are very charming and have an excellent introduction to the story.

The best is the madman played by Luke Evans, an unstoppable serial killer with a crazy philosophy of life.

Besides his madness, he is not an emotionless robot without feelings, showing some love for his two women and victims.

Just as he loves them, he doesn’t hesitate to hurt them for what he believes is correct and honest.

So the relationship with survivor Adelaide Clemens, who opens the film initially, is intriguing.

During her captivity, we witness what seems almost like psychopathic training with a few flashbacks.

As we later see in the finale, though cruel and unjust, this training will make the girl the only one with a chance of survival.

The most exciting feature of No One Lives is that in this 2012 movie, there are no good guys.

So we can say that the violence we see, even if not justified, is perhaps more acceptable because of the criminal nature of these people.

All the characters are murderers, thieves, and violent sociopaths who only have the bad luck, for once, to find someone worse than themselves in their way.

In conclusion, I greatly admired No One Lives in 2012, and I recently again watched and enjoyed this movie more.

If in all this time you haven’t had a chance to watch it yet, therefore, I can’t do anything but strongly recommend it to you.