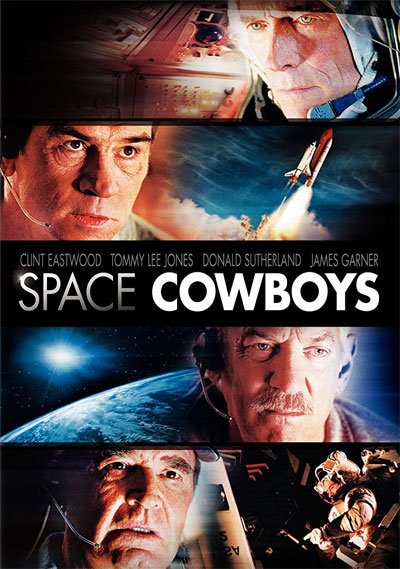 Space Cowboys is a 2000 Sci-Fi movie, one of few in this genre made by Clint Eastwood.

The story begins with NASA recruiting four elderly astronauts for a rescue mission.

These men were initially candidates for the first flight to the moon in the 1950s but ultimately never went.

Because of their familiarity with that era’s technologies, they are the perfect crew to repair an old Russian satellite.

This satellite dates back to the Cold War and, due to a malfunction, will crash in a few weeks on the earth.

However, the leader of these astronauts, still angry about the mission he never had when he was young, forces NASA to add his old team to the task.

Together with his elderly companions, he will have to repeat the hard training to assess their physical and psychological condition.

His friends accept the proposal, excited to travel into space, even fifty years later finally.

Unfortunately for them, what was supposed to be a simple mission will turn out to be much more dangerous than expected.

Indeed, the Russians said a communications satellite is actually a nuclear missile platform.

If they do not repair it in time before it crashes, it will automatically bomb the United States.

Riding in their spacesuits, these four old space cowboys face the last and greatest challenge of their lives.

Space Cowboys is a movie with a bit of sci-fi and comedy about friendship and men’s spirit of adventure.

It remains probably the most expensive production for a Clint Eastwood movie, nearly $90 million in total.

Which made the albeit considerable 120 million grossed not a great result at the box office.

NASA enthusiastically offered its collaboration, allowing the American director to shoot scenes in the Houston and Cape Canaveral space centers.

The story is a strange western in space, representing a second chance in more ways than one for these astronauts.

Indeed, it will also be their last chance for reconciliation for two of them after years of hating each other.

In addition to directing, Clint Eastwood plays the leader of this group of space grandpas, as usual, an amiable and ironic tough guy.

Both are grumpy older men, stubborn and arrogant, but they are undeniably the best at their jobs.

Their rivalry alone is worth half the movie, sparking a series of comic and sad duets simultaneously.

Not to be outdone are the other two old astronauts, womanizer Donald Sutherland and navigator, and fervent Baptist James Garner.

These two friends make up poker of amazing actors playing these space cowboys with great self-deprecation.

As mentioned, Clint Eastwood doesn’t forget his western roots, even while shooting a Sci-Fi story.

His journey is a wonderful space ride, taking us to the moon and back with these wise and funny characters.

Especially in the first half, the movie is pretty much a comedy between nice, irascible older men rather than a story about astronauts.

Indeed, these men don’t bend and break for anyone, living their life’s twilight with joy and lightness.

The great American director brilliantly mitigates the heroism of his characters, highlighting their immeasurable ego flaws.

Instead, the second part turns on an adventure with great attention to technical details but perhaps a slightly exaggerated sense of American heroism.

Despite this, the director ensures that nothing falls into banality or stupidity, keeping the narrative engaging.

The reunion between these four great actors is successful, and the romantic atmosphere of nostalgia envelops the movie without suffocating it.

Finally, the ending on the notes of Frank Sinatra’s Fly Me To The Moon is perfectly comic and successful for a story of this kind.

Summing up, we certainly cannot remember Space Cowboys as a masterpiece or as the best Clint Eastwood movie.

Yet in the almost two hours duration, the director succeeds in saying what he wants to say, entertaining his audience wonderfully.

So I give a big thumbs up to this cinema master who is still a beacon for all the filmmaking generations at over 90 years old.