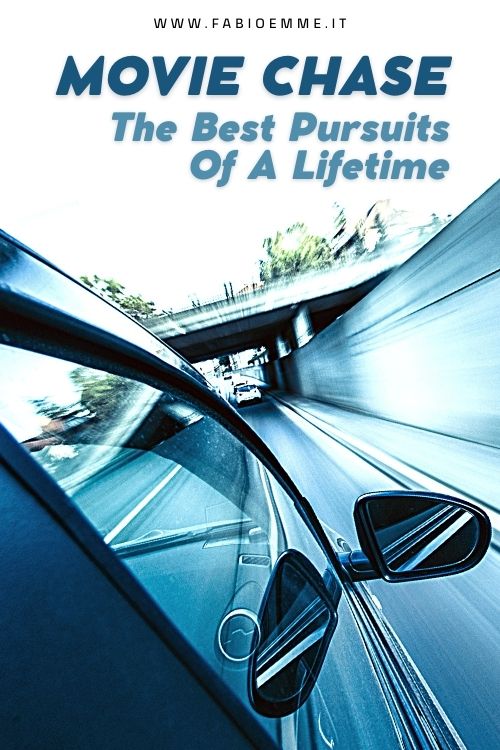 In the movies, criminals seem to never rest without ever stopping, and naturally, the cops chase them all the time.

The asphalt of the endless American roads becomes the canvas on which they paint their poetry in perpetual movement.

Just as their engines always roaring at maximum speed is the voice of a generation searching for something.

What are these men and women looking for?

Theoretically, everyone should get to be whatever they want in the land of opportunity.

But given the number of police officers in chase of these subjects, these movies seem to tell a different story.

Let’s take a look at just three of them, which have marked a generation of street racers worldwide.

Let’s quickly get on the road with a great master of cinema, the immortal California director Sam Peckinpah.

His story is about an ordinary American truck driver who everyone calls Rubber Duck.

Working together with his colleagues, they travel back and forth on the roads of Arizona.

Everything seems business as usual, chatting on the radio while trying to hook up a pretty girl in a Jaguar.

But when he arrives at a resting place, a policeman tries to blackmail a friend for money.

His friend reacts and starts a fight, involving all the truckers against the corrupt sheriff and his assistants.

After the clash, Rubber Duck and his friends must make a quick getaway, having knocked out all the cops.

Many other truckers join their cause, collectively forming an unstoppable convoy.

Along with the beautiful Jaguar’s girl, they all try to blast their way through the cops and get to Mexico.

Their escape will soon become a national scandal, which some slimy politicians will try to exploit for publicity.

However, the police have no intention of letting them cross the border, even at the cost of shooting down Rubber Duck and his truck.

Towards the frontier seeking the real America

This movie of car chases and road anarchy was released in cinemas the same year I was born, in 1978.

Initially, many people underestimated the work of Sam Peckinpah, considering it a minor work compared to his most famous westerns.

Over the years, however, Convoy has become a real cult, a hymn to personal freedom against the state’s authority.

In the same way, the face of the young Kris Kristofferson has become the icon of an entire generation.

The two likable Franklyn Ajaye and Burt Young play modern cowboys riding off into the sunset on their high-powered metal monsters.

Of course, since they’re all rough truckers, don’t expect the finesse of Shakespearean dialogue from them.

But there’s also room for poetry and love with the beautiful and sexy Ali MacGraw.

This free and proud woman holds her own against the men in this story, enchanting everyone with her beauty.

Finally, we also have the friendly and funny, as dirty and corrupt, sheriff played by Ernest Borgnine.

The actor was one of the suicidal gunmen in Peckinpah’s great 1969 masterpiece, The Wild Bunch.

Here, however, he is on the side of the law, but in the end, we will see him sympathize more with the criminals than with the dirty and useless politicians.

Convoy is a movie that every true American should watch and love, as he chases the dream of forgotten freedom.

Let’s get off the Convy trucks and into the Dodge Challenger of one of the most famous car chase in movie history.

Vanishing Point is the spiritual journey of Jimmy Kowalski, a former race car driver and cop, working as a courier.

His latest assignment is to deliver a car in record time, running from Denver to San Francisco.

The man then pushes the pedal to the floor, burning miles and staying awake with the help of amphetamines.

Very soon, his run attracts the attention of the police, who begin chasing him across three states.

However, the man seems unstoppable, and attempts to catch him only draw more attention.

Radio deejay Super Soul praises him as a hero, quickly becoming a symbol for bikers and hippies across America.

Capturing him becomes more than stopping a simple criminal but openly challenging the system.

Even the deejay will pay the price of admiring this man, being brutally beaten in his radio station.

While our hero takes a well-deserved break in the desert, the police prepare the last checkpoint he won’t be able to escape.

Vanishing Point is a cult film loved by all filmmakers worldwide, for example, openly quoted by director Quentin Tarantino in Death Proof.

Released a few years after the fantastic Easy Rider, these two movies have rewritten the rules of the on-the-road narrative.

Good director Richard C. Sarafian, an honest filmmaker, reaches the peak of his career with his best work.

Equally successful was actor Barry Newman, star of what he thought a minor film but became a generational icon.

His journey free of convention and constraint is a metaphor for an entire culture of post-Woodstock love and pacifism.

An ex-pilot and cop who no longer expects anything from life yet is never willing to give up on anyone.

Though they never meet, Cleavon Little is the blind, nonconformist deejay by his side.

This radio guru will also end up a victim of the brutality of ignorance, just because of his words.

Even today, every chase in this movie is impressive despite being a low-budget movie.

All while admiring the beautiful landscapes of the endless USA roads, at the rhythm of the great 70’s rock music.

In short, a great movie with a hippie soul and action muscles, which fully deserves its cult status and the many fans collected over the past 50 years.

From one cult classic to the next, here we are on my all-time favorite chase action movie.

In this story, we won’t even know our hero’s name, calling him simply The Driver.

We know that he’s the best behind the wheel and is a driver for criminals on the run from the police.

No one who has ever worked with him has ever been arrested or caught.

The man has no friends and lives in solitude, leaving the various contacts with the underworld to an intermediary.

Unfortunately, being too good also creates enemies, like a cop obsessed with framing him.

When he thought he had screwed him over with the testimony of a beautiful gambler, the woman denies everything leaving him to the embarrassment of his colleagues.

His fixation then leads him to work with criminals, commissioning a robbery he will try to foil.

The driver and the player must then make their escape before the situation goes beyond the point of irreversibility.

At that point, the entire city becomes the theater for this game of cops and robbers, where losing means ending up in jail forever.

Directed by the unquestionable genius of Walter Hill, this cult movie has had numerous homages and emulations in the world of cinema and even video games.

Not content with having directed a masterpiece of action and noir never seen before, the following year, he then arrived in theaters with the unforgettable The Warriors.

As mentioned, The Driver is a mythologized story that its protagonists don’t even have names.

Like Sergio Leone and The Good, the Bad, and the Ugly, each character almost seems like a stereotype.

So we have Ryan O’Neal playing the driver, another significant role after Stanley Kubrick‘s Barry Lyndon.

However, the actor’s inexpressive fixity is not a symptom of an inability to act but instead gives the character an impassive and inimitable charisma.

Straight from the European avant-garde cinema, the sublime Isabelle Adjani in the player’s role arrives for the first time in America.

The French actress was already famous after her roles in Adele H and The Tenant, under two masters such as François Truffaut and Roman Polański.

Perhaps even too silent, her character remains mysterious and beautiful until the end as the classic dark lady of every noir.

Finally, veteran Bruce Dern is perfect in the role of the detective, as funny as he is cruel and with no morals to guide him.

His obsession with catching the uncatchable driver will be his ruin, so much that he will behave like the dirtiest of criminals.

You will surely have noticed my exaltation in telling you about the chase movies of today, but here we are talking about three milestones of cinema.

So the actual crime is not what the characters commit, but it would be to have never seen any of these masterpieces.

look what i found latestbtcnews.com

Write more, thats all I have to say. Literally, it seems as though you relied on the video to make your point. You definitely know what youre talking about, why throw away your intelligence on just posting videos to your blog when you could be giving us something informative to read?

Thanks for the advice, I continue to try to improve my blog which I started about a month ago by learning optimization and readability … I hope my latest articles are more complete as you suggest

Kingdom Of Heaven – The Never...