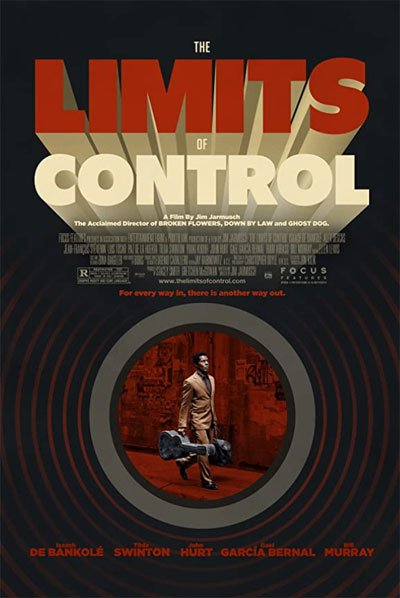 The Limits Of Control is a 2009 movie by a very unusual auteur, both loved and hated, as Jim Jarmusch has always been.

This director has never had half-measures, carrying out his style without caring about the current trends.

In this story, we follow the long journey of an African killer from Cameroon to the middle of the Spanish desert.

Not knowing the exact location of his target, his employers instruct him on how to contact a secret network of informants.

Arriving in France, the man then moves to Madrid, where he sits at a bar table every day waiting for information.

One by one, a series of strange characters pass him coded messages about what to do next.

Artists, singers, and mysterious, beautiful women give him a few packets of matches with these messages.

When he later moves to Seville, he begins to believe that someone may have discovered their plans.

His life and those of the informants are at that dangerous point, and he must hurry to finish his work.

Indeed, his target is inside a military facility hidden in the desert and surrounded by the army.

The security measures are not particularly strong, so he must take advantage of an opportunity that might not come again.

Murder as a philosophy and lifestyle

Ten years after Ghost Dog, Jim Jarmusch continues the same killer movie theme in 2009 with The Limits of Control.

Isaach De Bankolé was also already present in the 1999 movie as a friend of the protagonist Forest Whitaker.

In that case, the killer was a black boy from the ghetto who lived according to the old samurai code.

Here instead, the protagonist is extremely silent, but we understand his uncompromising ethics with a few words.

This man has his rigorous daily rituals, from morning Zen meditation to a double coffee sitting at the usual coffee table every day.

Equally colorful are the characters he encounters, a bizarre and original informant network.

Among them, we have actors of the caliber of Tilda Swinton and John Hurt, with whom he seems to talk about everything except his work.

All this to finally arrive at his target, an extraordinary Bill Murray, a longtime great friend of the director.

The villain he plays is a strictly American politician whose militaristic spirit is the antithesis of the protagonist’s lifestyle.

However, his mission is not about revenge, as he emphasizes before killing.

Using his imagination, the killer is a soldier fighting the arbitrary unjust monarchy of the secret masters of the world.

Those unknown moments of cinema

2009’s The Limits Of Control is one of the lesser-known movies in Jim Jarmusch‘s long filmography.

Indeed, this very unusual work struggled to find its place among the various international festivals.

Instead, I consider it one of the movies in which Jarmusch best combines the form and substance of his style.

The director’s instinct in the shots and the long times of his filming is slow and surreal, like a dream.

Almost, the story seems to live on improvisation, as if the various characters come out by chance without a script.

I think that’s where the title comes from, contrasting the freedom of imagination with the limits of our society’s control.

Although it may seem like nothing happens in the entire movie, this nothingness is incredibly creative and imaginative.

In this case, form dominates over content, which you have to look for carefully between frames.

As usual, the director lavishes himself with numerous quotations from art, music, cinema, and even science and spirituality.

So, let’s enjoy this movie that is as elegant as the shiny dress of this killer.

In conclusion, to love cinema means to love what we see on the screen, which always happens with Jim Jarmusch.