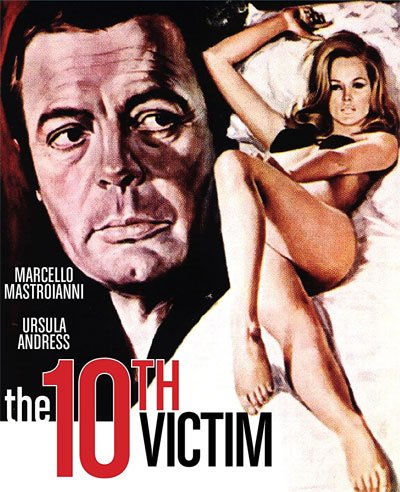 The 10th Victim is an excellent example of a 1965 Italian sci-fi movie by the great director Elio Petri.

It takes place in a dystopian future where world leaders decide to legalize murder by confining it to a television game.

The aim is to consolidate the power of the parties, giving vent to violence and offering the possibility of becoming famous to the participants.

They must face five challenges as both hunter and prey, for a total of ten hunts.

After completing the last game, the survivors win the chance to retire to private life forever.

They will be honored as Decathon, earning privileges and idolizing the crowds as a magnificent national hero.

The story begins with a beautiful American hunter who survives her ninth game by killing her hunter.

The electronic computer then assigns her latest prey, an eccentric Italian living in Rome.

They will then begin to study each other’s habits on the sly, setting a trap to fool their opponents.

In the meantime, they make arrangements with the sponsors, trying to make the most money by selling the exclusive on the murder.

While spending time together, however, they like each other and begin to fall in love.

But will it be an honest feeling, or are they faking it again to win the game?

The 10th Victim is one of the greatest dystopian science fiction movies ever, not just from 1965.

A great metaphor about the power of mass media and the commodification of violence for hire turned into a game.

Governments worldwide exploit this power to rule without disturbance, literally pitting citizens against each other.

This pattern for a futuristic story will be repeated in later years.

Another example is the 2000’s fabulous Battle Royale, where the law forced a group of students into a deadly game.

Or later still, we have the entertaining saga of The Hunger Games with the stunning Jennifer Lawrence in the lead.

All these movies carry on in their way the ideas of this beautiful masterpiece by Elio Petri.

Moving from New York to Rome, the Italian director defines a new sci-fi with a modern and colorful look.

Moreover, the most incredible value of this movie is its irony, which is present in every scene and character.

This European comedy can be enjoyed by international audiences, mixing it cleverly with thriller and action.

The 10th Victim can be the right occasion to approach the Italian cinema, a country that before and after 1965 has had directors and actors of all kinds.

Cinema and Star System of another era

Leaving the 1950s neorealism behind, the Italian auteur experiments with new ideas in direction and aesthetics.

Indeed we can define the look and design of this future a bit like the precursor of the Wachowski sisters’ Matrix.

Character harmonization and personal motivations are practically perfect, with continuous but never annoying or boring dialogue.

Ursula Andress is a goddess, the beautiful and intelligent assassin nearing retirement on her most arduous hunt.

A woman who moves all her pieces with exasperated precision, meticulously planning her final fight.

Instead, Marcello Mastroianni is a lazy hunter bored with his life, mistresses, ex-wives, and friends.

This ironic and arrogant man seems almost not to care about the possibility of dying at any moment, living, as usual, his days.

Highly attracted to his assassin, he also spends a lot of time with her, knowing that she wants to kill him.

But, secretly, he also takes care of his plan by making business deals and choosing the best places to carry out his murder.

It’s a love story between commercials, exclusive strip clubs, and amusing or even romantic shootings.

As an Italian, The 10th Victim is one of my favorite films, even though it appeared in theaters in 1965, well before I was born.

Yet we cinephiles are all equal, ageless, and simultaneously experiencing the flow of all cinematic eras and fashions.