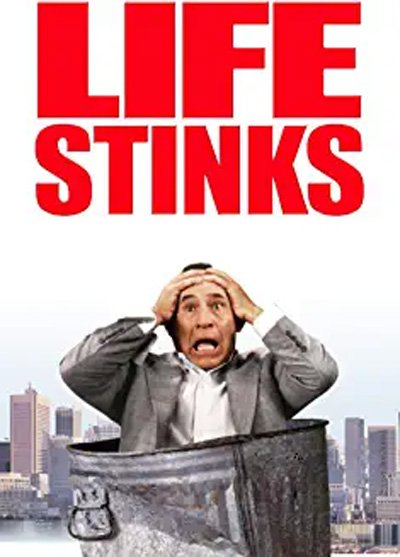 Life Stinks is a hilarious 1991 movie directed and starring a comedy genius like Mel Brooks.

In this story, the great comedian plays a rich and bored businessman who has reached the zenith of success and power.

Everything bores him and no longer finding challenges worthy of his interest, he treats everyone else with contempt.

His best friends, tired of his attitude, challenge him to spend a month surviving alone on the streets as a penniless bum.

The man accepts the bet, convinced that he will win easily, wandering the streets of Los Angeles with only his clothes and nothing else.

Initially trying to meet the most basic needs, the man searches for food and shelter to live.

However, he soon becomes friends with some derelicts who teach him the tricks of surviving on the streets.

Slowly the heart of this cynical businessman beats again thanks to the selfless kindness of his new friends.

He thus begins to regret his project that should rebuild the neighborhood and then rebuild it from scratch.

So he decides to cancel everything, discovering the true values of life, the company of people, and, in the end, even love.

But his old rich supposed friends, losing the chance to make a lot of money, will try to hinder him in every way.

Mel Brooks has been around since the 1960s, so he’s familiar with the changes that cinema has gone through.

Life Stinks is an irresistible comedy in a modern context that clearly has inspiration from classic movies from the past.

Classics such as the great works of Charlie Chaplin, from which it takes the iconic character of the funny and elegant bum.

The comedy then arrives on multiple levels, from the physical mimicry of the characters to the exceptional jokes.

In addition, the director wisely chooses dirty photography with few colors, as if it were a documentary.

The harsh aesthetic realism against the sweet narrative poetry creates an inimitable contrast.

A visual blackout that increases the amusement of the most hilarious scenes, becoming believable despite their absurdity.

In short, this Life Stinks is a movie that cinematically embodies the old saying: money doesn’t make you happy.

Despite living on the social fringe, these poor characters are more joyful and carefree than the rich and cruel businessmen.

Speaking as a mere viewer, however, what matters most are the hilarious gags that follow each other relentlessly.

So even if you want to ignore the clever social metaphor, this comedy makes you laugh out loud from start to finish.

The happiness of a simple life

This excellent film is written, directed, and performed by one of the greatest comedians in film history.

Mel Brooks‘ transformation from impassive businessman to a street beggar is simply phenomenal.

Immediately the man realizes that if he wants to eat he must resort to any means, stealing and pitying others.

The screenplay spares no criticism of anyone from the police to hospitals, as well as politicians and financiers.

Everything changes when he meets the exceptional ecosystem of tramps who will accompany him on his adventure.

A cheerful company of actors on which stands out the dirty but charming smile of the beautiful Lesley Ann Warren.

A woman completely abandoned by society, family, colleagues, and former friends who repudiate her, but still proud, free, and independent.

Indeed she finds happiness in the small things and ordinary daily gestures that many others do not appreciate or even notice.

Opening the heart of the rich cynic, it is thanks to her that this wicked man truly begins to live.

Life Stinks was undoubtedly one of the most important films of the 90s, albeit grossing little at the box office.

This comedy is not only suitable for everyone but considering our times is still alive today more than ever.

A story that makes you smile and think in every scene, reflecting on our hectic and unforgiving modern world.

While increasingly interconnected, this world is made up of lonely, stupid people soured by their own meanness.

But of course, it doesn’t have to be that way, so still being able to laugh is always the most important thing.

Elizabeth – The Fearless Queen Of...