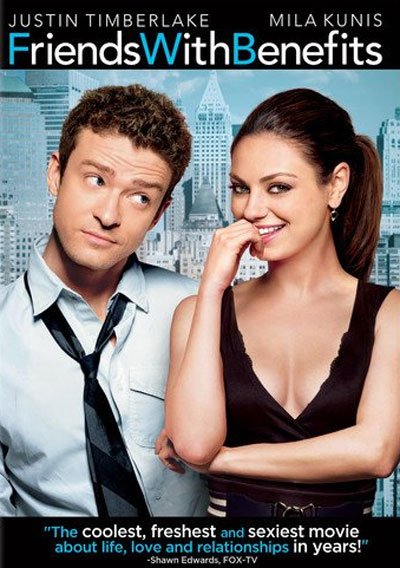 Friends with Benefits is a 2011 movie that raises an interesting question: is it possible to separate sex from feelings?

It all starts with a female PR agent who absolutely wants to convince a brilliant author to work for a magazine.

Welcoming him when he arrives in New York, she then takes him on a tour of the city’s clubs and keeps him company.

She soon becomes his best friend, spending a lot of time with him every day.

One evening, while they are at home doing nothing, they start talking about their personal lives.

They both discover that they have a lot in common, disappointed by their last relationships that ended badly.

Knowing well that they like each other, they suddenly decide to make a pact: become friends with benefits.

This means that they will have sex without any problems or commitment to become boyfriends or anything like that.

The pact seems to work in the early days and even invigorates their friendship much more.

But after they have become deeply intimate, it will obviously be difficult to separate sex and feelings as they had decided.

At that point, they will just have to decide between stopping dating or turning their relationship into something more.

Not very original and yet well-made

Friends with Benefits is a movie that had immense success in 2011, grossing almost 150 million dollars worldwide.

Let’s face it, the formula of the funny romantic comedy dies hard and always works with any generation.

That said, there are undoubted qualities that elevate it above the multitude of similar comedies that come out every year.

First of all, the direct and sincere dialogues of the two handsome leads work with simplicity, without being exaggerated or vulgar.

Good chemistry begins initially in the glamorous settings of NY and then continues in the family life of the two lovers.

Of course, we are talking about a movie for boys, so all the sex scenes are more suggested than explicit.

Regardless, the relationships of these friends with benefits are fun, dealing with the difficulties and embarrassments of all young couples.

The escalation of feelings over sex was predictable, but it’s not stupid or trite despite that.

Likewise, the pacifying scene in the airport, almost a must in films of this genre, is impossible to miss.

In short, indeed, we are not faced with a new or original comedy, but achieves its goal of entertainment effectively.

I honestly don’t know what to praise about Will Gluck‘s direction, with no significant flaws or considerable strengths.

The director packs the right emotions, predictable but still effective, at the right time.

What really works best are the two lead actors, practically always present in every scene.

Their characters’ success lies in going beyond the cover star image they seem at first.

Justin Timberlake has the kind, friendly face for the new guy in town, sexy and elegant in his genuine simplicity.

The former singer proves he can be a good lead actor, such as in the even better In Time.

Equally beautiful and talented, Mila Kunis finally gets an honorable part after being a supporting actress in various movies.

A few years later, she will be the absolute protagonist in Jupiter Ascending, an intriguing Sci-Fi film by the famous Wachowski sisters.

Finally, we also have in the always reliable Woody Harrelson in the small role of the young Timberlake’s gay mentor.

Unfortunately, the actor doesn’t get a lot of screen time, but he lends that acting depth the two leads honestly don’t have.

In conclusion, I’ll admit that I had more fun than I thought I would with a not-so-original rom-com.

Friends with Benefits is the typical movie good for any occasion, suitable for couples as well as lonely hearts.

I doubt we’ll remember it in 50 years as a cinematic masterpiece, but after all, there’s nothing wrong with having some carefree fun once in a while.

The Fisher King – A colorful destiny for an awesome lunatic