The Fisher King – A colorful destiny for an awesome lunatic 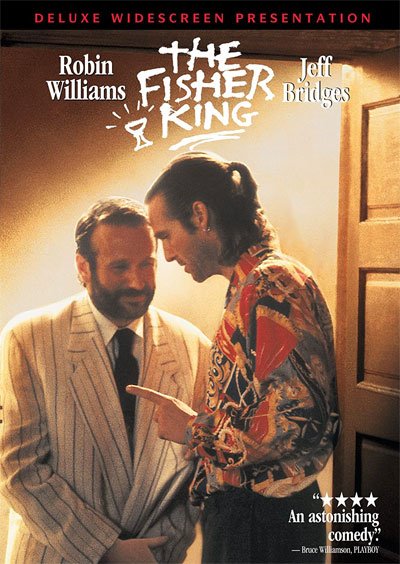 In 1991 was released a movie by Terry Gilliam, The Fisher King, starring the extraordinary Jeff Bridges and Robin Williams.

Bridges play a man who no longer has a purpose in life, kept afloat only by the inexhaustible love of his woman.

Trying to help her in her video store, he feels worthless and spends his evenings getting drunk.

One night, drunk out of his mind, he encounters some thugs who beat him savagely and try to set him on fire.

Luckily for him, Williams’ character comes to his rescue, and together with some tramps, he puts the attackers to flight.

The encounter seems to be a tragedy of fate, given the tragic past, they unknowingly share.

Bridges was once a famous radio provocateur who fell into ruin after one of his listeners carried out a massacre in a club.

Williams, instead, was a respectable professor who went insane after his beloved wife died in that same bloodbath.

He now lives on the streets, thinking he is a warrior from the Crusades days with a divine mission.

Indeed, he believes a billionaire is hiding the Holy Grail in his New York mansion, and he must recover it.

Considering his new friend as a fate sign, he tries to convince him to help in his crazy mission.

Does God speak only to the poor and the insane?

Each of these characters hides a personal tragedy that they would like to forget.

A defeat from which none of them has been able to recover, remaining trapped in the poverty of the street.

Although poor in their wallets, these outsiders are rich in spirit through simplicity and friendship.

In fact, despite being dirty and having nothing, they seem much happier than people with jobs and families.

Robin Williams is the ultimate expression of this movie and the one who later tells us The Fisher King’s tale.

Taking refuge in the madness of grief, he embodies his wife’s death’s memory in a demonic figure riding a horse that hunts him down.

Jeff Bridges is equally struggling with his drama, letting guilt overwhelm him by destroying his life.

Instead, we initially see him as an arrogant and selfish successful man, almost as if the tragedy is a divine punishment for his conceit.

However, fate seems to offer the two men one last crazy chance by bringing them together.

From that moment on, each of them will be able to find the peace and, perhaps, even the love they no longer believed possible.

A magnificent comedy of craziness and friendship

The genius of The Fisher King is to put together these dramas in a comic movie, especially for the irresistible presence of Robin Williams.

The late actor who sadly passed away in 2014 provides a simply unforgettable performance.

His lucid madness is a tornado that drags with it all the other characters overwhelming everything it encounters.

But despite the mental trauma, this broken man gives us great moments of wisdom and humanity.

Jeff Bridges‘ character drinks from this fountain of goodness and compassion like a thirsty man in the desert.

This actor is perfectly comfortable, whether as an arrogant deejay at first or a human wreck later on.

His initial distrust of Williams becomes friendship and then devotion when he wants to save his life at any cost.

Finally, let us also mention the two female protagonists of this story, a symbol of life and hope for these two men.

The deejay’s wife is a beautiful and sympathetic Mercedes Ruehl, who won the Oscar for Best Supporting Actress.

Instead, the other woman is Amanda Plummer, a shy and clumsy secretary whom Williams follows every day and with whom he is secretly in love.

Terry Gilliam directs this excellent cast in harmony, perfectly managing the moments of drama and irony.

His inimitable style makes The Fisher King‘s considerable commercial success and one of the best of Robin Williams‘ career movies.

I recommend it as a perfect cure when we feel depressed, as a modern fable with a lovely moral.

Top Horror Anthology Movies – How to scary in more episodes