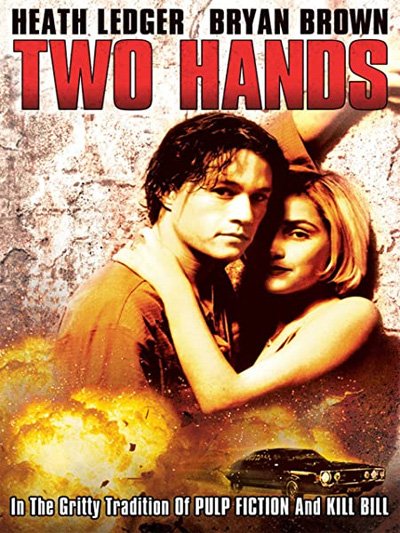 Two Hands was one of the first movies for the young Heath Ledger, back in 1999 still far from becoming an international star.

The story takes place in Australia, the birthplace of the famous and cursed actor and many other interesting directors.

Ledger plays a boy who lives on small jobs, such as illegal fighting or being a bodyguard in a strip club.

Despite the ruthless and violent world where he lives, he has a naive, innocent, and kind soul.

Having no grand plans for the future, he lives for the day trying to make some money and courting a friend’s sister.

Until a criminal gang leader offers him the job to make a delivery of money to one of his associates.

Unfortunately, while waiting for the courier, the boy foolishly gets his package stolen while taking a bath at the beach.

Knowing the boss’s vengeful reputation, he knows he can’t simply return to him empty-handed.

So he and a friend decide to rob a bank, hoping to make enough money to pay back the gang.

He doesn’t know that shortly before he died, his brother was in the same situation with the boss.

In a race against time, the boy will try to fix his problems while the gang relentlessly scours the city looking for him.

The most famous case is George Miller‘s brilliant Mad Max, which laid the groundwork for all subsequent post-apocalyptic movies.

However, other directors have also emerged from faraway Australia, making their way to Hollywood.

We can remember Russell Mulcahy with Highlander up to our days with the Spierig brothers, authors of the excellent Predestination.

In this case, Gregor Jordan is another director who has made it, reaching the general public in 2001 with Buffalo Soldiers.

In 1999, Heath Ledger was still unknown, but he had already shown his talent with a movie like Two Hands.

The story is an excellent example of youth lost in an environment of severe urban decay.

It is a choice that follows the more famous Once Were Warriors but cares to have its unique originality.

Also taking place in Sydney, this movie is much less emotionally and visually violent while still having its narrative strength.

Everyone knows everyone in this small criminal world and is friends with everyone else.

But at the same time, no one wastes the opportunity to kill or rob each other for a few pennies.

Even in this kind of movie, there is imagination like the protagonist’s dead brother’s ghost as the narrative voice.

This choice is reminiscent of masterpieces like Sunset Boulevard, giving an otherwise grimly realistic story a surreal atmosphere.

Young actors waiting for the glory

Immediately loved by women, Heath Ledger instead slowly rose to the general public’s attention until the romantic drama Brokeback Mountain.

A few years later, he became the insane Joker in The Dark Knight, shortly before his unfortunate untimely death.

Few know about his Australian movies like Two Hands, after which he debut in Hollywood, playing in The Patriot.

We can already admire all his acting skills with a character light but challenging at the same time.

Equally unknown was the young Rose Byrne, an Australian actress who would later succeed with the series Damages.

A series that I loved very much was where she acted alongside the superb Glenn Close, from whom I believe she learned a lot about the profession.

She is a young country girl who has just arrived in the city and immediately flirts with the protagonist innocently.

As things get progressively worse for him, she becomes the dream of salvation out of a criminal nightmare.

Finally, let’s also say a few words about the excellent director Gregor Jordan, who takes an urban aesthetic of filth and ignorance like Trainspotting.

While not becoming a cult as Danny Boyle‘s masterpiece, I think it is unfair that it is so little known.

So let’s take the opportunity to watch Two Hands in streaming, much more convenient than how we used to watch movies back in 1999.

Top Horror Anthology Movies – How to scary in more episodes

The Dirty Dozen – A Suicidal...