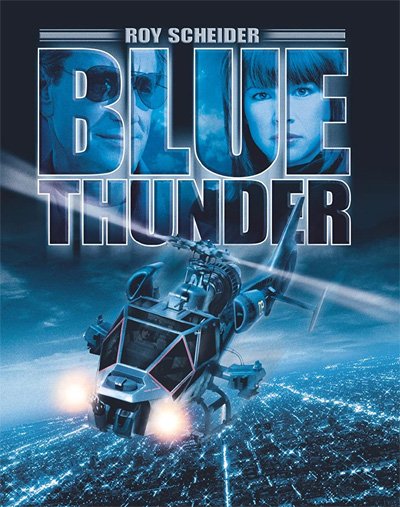 Blue Thunder is a 1983 movie starring a funny and cunning helicopter pilot working for the LAPD.

Constantly flying over the city, he watches over and helps his colleagues from above to do their jobs.

Until one night, he witnesses the brutal assault of a woman by some robbers.

The victim dies in the hospital, but later it comes out that she was an important city councilman.

At the same time, the army contacts the pilot to test a new prototype military helicopter in an urban environment.

It is codenamed the Blue Thunder, with state-of-the-art surveillance equipment and a heavy weapons arsenal.

Due to growing social unrest and demonstrations, the vehicle will become the new anti-riot weapon.

While driving the amazing new military toy over the city, the cop discovers the instigators of the councilman’s murder.

Behind the murder disguised as an ordinary robbery lies a plot for total control of the city.

After recording everything with the helicopter’s cameras, the man and his young colleague realize that they are in great danger.

Therefore, to survive, they absolutely must make the scandal public and expose the criminal plan.

So they have to fly and deliver the recordings to the media with the army and the cops chasing them.

But an evil rival of the pilot will try to stop them in any way, even if it means an armed confrontation over the skies of Los Angeles.

A cop amid the skies of the city of angels

The idea of the flying cop revives a widely abused genre and gives the story a whole new style.

Deftly blending the genre’s hallmarks, the brisk pace and an omnipresent sense of humor dampen the tension without being ridiculous.

This recipe is lost on many modern films, which aim for unnecessarily more serious stories and compulsive video editing.

In this case, the cinematography and staging follow the rules of classic cinema but are updated with modern themes.

Moreover, the plot is not the usual struggle of good against evil through trite and stereotypical characters.

The police and military are not always the good guys, and the problems are not the fault of the usual anarchist criminals.

On the contrary, the fierce police repression against citizens is still a theme more relevant than ever.

Especially in the United States, as we have seen in the sad and recent news episodes in recent years.

However, beyond the underlying political message, John Badham‘s excellent direction works best of all.

His style always succeeds between a serious thriller and a fun B movie with which to have entertainment.

Blue Thunder is still one of the best stunt movies with helicopters, among which I don’t remember many other contenders.

At the screenplay, we have the brilliant Dan O’Bannon, with a successful blockbuster career as Alien or Total Recall.

John Badham skillfully directs this mix with a cadenced pace and makes the most of the means at his disposal.

Today, many have forgotten an author that has marked the cinema with many cult films between the 70s and 90s.

Wargames, Short Circuit, Saturday Night Fever… if you don’t know him, you surely know at least one of his films.

The director was also lucky enough to have two big-name actors riding their wave of success.

Roy Scheider was, in fact, one of the most popular stars after his outstanding performance in Steven Spielberg’s Jaws.

A likable bad boy who is always ready to joke, perfect to adapt to any role and cinematic genre.

However, as his arch-enemy, we have the evergreen and diabolical Malcolm Mcdowell.

An iconic face of madness who has played almost only villain roles since Stanley Kubrick‘s A Clockwork Orange.

They play two helicopter pilots with an intense rivalry that inevitably leads to the final aerial combat at heart.

To sum up, Blue Thunder is a film that in the ’80s had a huge success, as the homonymous TV series about the same helicopter.

Since it lacks modern digital effects, it ages like wine and improves with the years.