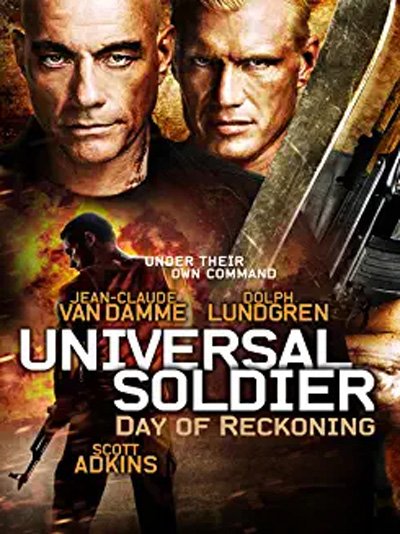 Universal Soldier is a small saga that I’ve always found entertaining but not exceptional, except for its latest chapter, Day of Reckoning.

Without having to summarize the three previous films, let’s just talk about the basics.

The plot revolves around some dead soldiers brought back to life by the government to become ruthless human weapons without conscience.

One day an ordinary man wakes up in the middle of the night to find some of these soldiers in his living room.

They kill his wife and child without hesitation, beating him savagely, leaving him nearly dead.

After nine months, the man wakes up in the hospital, where an FBI agent tells him the massacre’s perpetrator.

With no family left to return to, he wants to try at least to understand why these killers targeted him.

As he investigates and puts the pieces of this story together, however, he begins to doubt that his entire life is not a deception.

At the same time, another seemingly ordinary man begins to hunt him down, exterminating anyone he meets in his path.

Retracing the steps of a life he didn’t remember having, he discovers the existence of a group of these resurrected soldiers.

They were all rebelling against the government that created them, joining together in an army with a common purpose.

As the man gets closer and closer to discovering the lair of these deserters, he will have to figure out which side to take in this war.

An action movie turning into a mystery thriller

Day of reckoning concludes the Universal Soldier saga with dignity indeed; I am sorry that there were no further sequels.

This last movie changes a lot the American action style of the previous ones, becoming much darker and more serious.

Already from the first sequence, we quickly understand that the mood has changed.

The excellent director John Hyams opens immediately with a subjective sequence plan, carrying it on with style and elegance.

This tender picture of the father reassuring his daughter in the dark becomes a bloodbath when the monsters truly arrive.

We carry the initial shock throughout the rest of the story with a surreal atmosphere that never leaves us until the end.

Having to explain, I’d say it’s a more clever movie than actually intelligent.

By that, I mean that the screenplay avoids explanations through dialogue, letting the images do the talking.

The plot, in general, is basically no better than previous Universal Soldiers, but the direction really makes a difference.

In this case, the numerous fights, apart from being much better realized, also make logical sense in the narrative.

Summing up, this saga, quite bland but amusing, had finally taken an exciting turn.

So since 2012, there have been no further sequels; I’m afraid this is the definitive conclusion.

Are Van Damme and Lundgren just on the cover?

As already mentioned, John Hyams does an excellent job modifying the style, also collaborating in the writing of Universal Soldier: Day of Reckoning.

We saw improvements in the previous chapter, Regeneration, also directed by this director.

However, here we reach the maximum possible of this saga, which becomes almost an action thriller mystery.

Jean-Claude Van Damme and Dolph Lundgren are now a pretext to tell the story, which could continue even without them.

It is no coincidence that the famous action stars appear on the scene only for a few minutes, although very entertaining.

Indeed, Andrei Arlovski is most prominent as the hitman/plumber who begins to hunt down the protagonist.

The former MMA fighter performs impressive shooting and fighting action scenes and has a more active role in the story.

Finally, the main character is Scott Adkins, quite believable in playing the ordinary person who becomes an unstoppable killing machine.

We may not remember him for acting greats as Marlon Brando, but he plays his part shamelessly nonetheless.

Also, his muscular presence and martial skills benefit the action scenes, providing a power boost to the character.

Summing up, I was amazed by this movie, which I waited a lot to see and unfairly underestimated.

The plot and characters are much more intriguing than I thought, plus the direction achieves some classy moments.

In short, Day of Reckoning is an ideal movie for action lovers and is undoubtedly the best of the Universal Soldier saga.

Bridesmaids – Jubilant about marriage but...