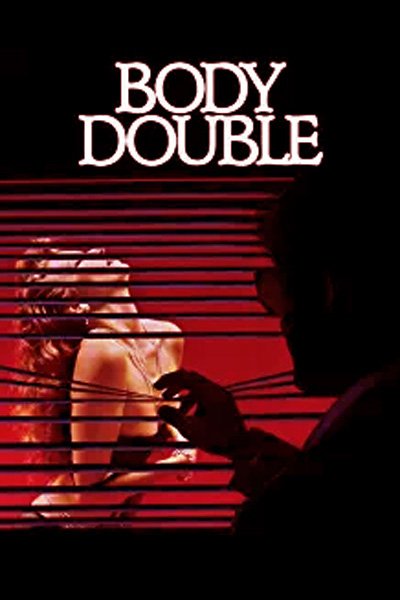 Body Double is a superb 1984 thriller, with which Brian De Palma pays homage to the style of Alfred Hitchcock‘s movies.

The protagonist is a Hollywood actor who loses his job, home, and girlfriend for unfortunate coincidences on the same day.

Not knowing where to go or what to do, he begins to get drunk in a bar where he meets a stranger who invites him to stay a few days at his house.

The man seems to be very rich, and his mansion is enormous and luxurious, also has an extraordinary bonus.

Every night his sexy neighbor performs a striptease in front of a window, allowing him to enjoy the show with a spyglass.

The actor eagerly agrees to stay there until the return of his wealthy new friend, searching meanwhile for another job.

However, this is difficult because he has claustrophobia, making it impossible to shoot scenes in tight places without fear.

To lift his spirits in that difficult moment, he spends his time secretly following his beautiful neighbor.

When he is admiring her daily striptease one evening, as usual, a thief breaks into the house and kills her.

The police view the crime as a robbery gone wrong, but he believes something else is going on.

He begins to investigate secretly, trying to put together everything he has seen, but the road to the truth will be difficult and dangerous.

Suspense has never been so sexy

Brian De Palma has always been among my favorite directors, perhaps the best in carrying on Alfred Hitchcock‘s ideas and style of filmmaking.

However, his movies are not a just copy of the great suspense master, as he demonstrates with 1984 Body Double.

Brightly, the director combines the popular crime thriller genre with psychological themes such as fear and voyeurism.

Sex is an integral part of the story and not a simple excuse to show some girl’s tits.

On the contrary, the director takes us behind the scenes of an actual movie set, revealing some trade tricks.

Of course, there is no lack of tension and enormous sensuality in the characters that make the director’s talent shine.

Desire drives each to perform one action instead of the other, with sexuality more suggested than explicit.

Also, the various murder scenes are both brutal and elegant, harkening back to a more Italian style like Dario Argento or Mario Bava.

As far as I’m concerned, 1984’s Body Double is an absolute cult movie to be loved and re-watched at every possible opportunity.

Brian De Palma brushes one scene after another into a great masterpiece of moving images.

The camera movements are fluid and elegant, with remarkable sequence plans and wonderful slow-motion moments.

The enormous elegance of Hollywood’s luxurious apartments blends seamlessly with the poverty of its seedier neighborhoods.

In addition, the director handles like clockwork the large cast at his disposal in a chorus of perfect performances.

Craig Wasson is a believable protagonist, without being cool or strong, but simply human and full of doubts and fears.

Aspiring actors can empathize in Hollywood, where one gets famous in a minute and disappears into nothingness in a second.

Gregg Henry is the mysterious friend who throws a poor loser back into the game, disillusioned with life and love.

His character is appropriately ambiguous until the end, hovering between slimy and admirable as only the worst (or best) rich can be.

Finally, we come to the two female leads, where I really couldn’t choose where to start.

Melanie Griffith and Deborah Shelton rival each other in beauty and sensuality, with performances that make history.

The former is younger, cheerful, and reckless, while the latter is the warm and silent woman moving in the shadows.

I don’t want to say more to avoid depriving you of the magnificent story twists, perfectly complementing the director’s elegance.

I conclude by saying to run to retrieve this 1984 movie, so you will really understand the meaning of Body Double.

Darkness – A haunted house in...