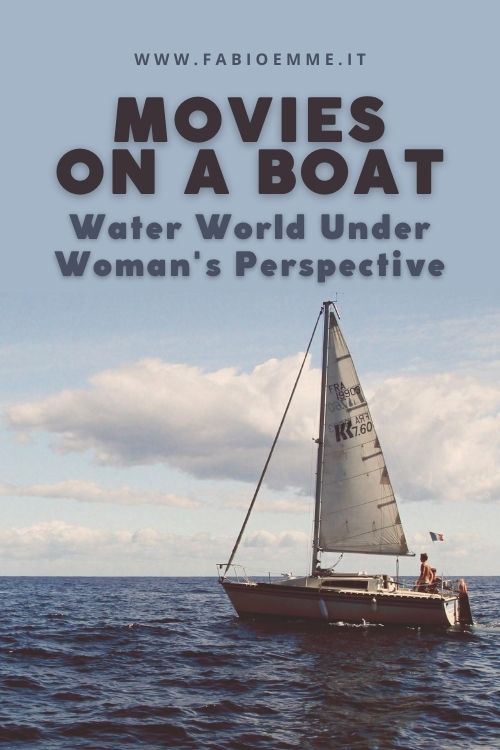 When we think of water and the sea, we immediately associate them with women and boats, especially in movies.

One example of all could be the multi-billion dollar international success of Titanic; a timeless blockbuster loved in every cardinal point of the planet.

In that case, the cold and implacable waters of the Atlantic Ocean marked the end and a new beginning for the sweet protagonist.

As a feminine element of adaptability and continuous change, water has culturally and religiously the sense of rebirth.

Indeed, we think of a ritual such as Baptism, familiar to Jews and Buddhists or Christians, marking the true beginning of an individual’s journey in that faith.

But let’s stick to the topic of movies about boats, preferably with beautiful women in the skimpiest costumes possible diving into a sea of trouble.

Maybe being late January, it’s still too early to think about summer, but nothing stops us from traveling, at least with our imagination.

So let’s put on the protective cream and sunglasses before viewing since we know the first tan will leave its mark.

Let’s start our boat ride with one of the lesser-known movies by a woman director who is highly famous worldwide.

In 2001, The Weight of Water was released in cinemas, demonstrating Kathryn Bigelow‘s incredible talent.

The story is about a photographer working on an old news case about a brutal double murder in 1873.

It’s an opportunity to take a vacation with her husband and his brother, bringing his new young girlfriend with him.

The group boards a yacht and sets sail for a small island in New Hampshire.

His job is to photograph that place where a rough laborer’s famous murder of two women took place.

Despite the atmosphere of calm and relaxation, a strange tension hovers between the couples, of which no one speaks openly.

The woman is jealous of the young fiancée’s constant attention to her husband, a famous writer with many admirers worldwide.

Moreover, when analyzing the testimonies and the crime scene, something doesn’t add up, and that case starts to look suspicious.

Very soon, the doubt that the authorities were wrong, condemning the wrong person to death for those murders, becomes stronger.

At the same time, the situation on the boat between her and her husband becomes more and more exasperating.

Floating on the water between the past and the present, the woman must shed light on an antique injustice.

Truth can be painful and unexpected

Kathryn Bigelow is a director who has positively marked cinema history with cult hits like Point Break or Strange Days.

The Weight of Water is perhaps the most personal film of this woman who imposed her talent in a profession, for the most part, historically masculine.

Catherine McCormack plays the role of a lifetime, after the unfortunate little girlfriend in Braveheart where they, unfortunately, took her out very quickly and brutally.

Her character looks at the world through her camera, expressing herself with the silence of inner suffering that gives her no peace.

To this romantic melodrama, the crime thriller of the previous century is added, which travels parallel to the main story.

A story in which young Sarah Polley is captive in a marriage to a kind ma,n but without any passion.

To complicate her unhappy life arrives Ciarán Hinds, a rough worker who slyly sets his eyes on her.

The antipathy towards this character is strong and immediate, which will be his downfall.

Indeed, even the police judge him a little too hastily as the culprit of the murders, not investigating further.

But the truth is as devious as a boat ride can be, taking the film from the tranquility of lies to an unacceptable final fact.

I won’t tell you more than that to avoid spoilers, except this is one of the most feminine thrillers in cinema history.

We now move from the drama of two women separated by time to a film about a mother stuck in a time loop during a boat trip.

The story is about a woman who leaves her son at home to embark on some friends’ yacht to spend a carefree weekend.

However, a violent storm hits shortly after their departure, leaving them adrift on the wreckage floating in the sea.

Just as they begin to think that they will slowly die of hunger and thirst, a large cruise ship appears on the horizon.

Confident of safety, the group climbs aboard and begins to wander around searching for help but finds no one.

The halls and corridors are in excellent condition with no signs of neglect or filth, but the place is empty.

As soon as the woman separates from the group, a mysterious hooded figure attacks and tries to kill her.

Returning to warn her friends, she discovers that the killer has already killed them all, and now it’s her turn.

Miraculously, she throws her attacker overboard, but looking from the deck, she sees something extraordinary.

Towards the ship, her friends are approaching again along with herself, still in the wreckage as before.

Deep in a cycle of events repeating endlessly, the woman must search for a way out of that water nightmare.

Even then, the terrible final truth will be too painful for her fragile mind to accept.

The myth of Sisyphus takes a trip to the sea

Triangle is another little-known but fascinating movie that stages a time loop taking place entirely on a boat.

Referring to the sad story of an ancient villain of Greek myths, Sisyphus, it replaces him with a lonely and sad mother.

However, the old Greek king perhaps deserved the sad fate of toiling with a boulder for eternity.

In contrast, this woman emerges from the water more confused and lost, with no one to help her.

For this role, we have the beautiful Melissa George, who comes from series such as Alias and The Good Wife.

In this case, however, the actress demonstrates she can also excellently as the story’s main protagonist.

Christopher Smith does an exceptional job in putting together a story that, let’s face it, narratively may have more than one flaw.

But these flaws do not sink the boat; indeed, the movie is kept afloat by the director’s excellent editing skills.

Among the many titles that I recommend every day, this is really one of those I particularly care about.

Triangle has been unlucky in distribution, never reaching the general public as it would have deserved.

So let’s throw an excellent lifesaver and get it back on board, saving an original mystery like a few others.

After two group boat trips, we finally arrive at a movie about a married couple sailing alone, searching for peace.

The husband is a naval officer who takes time off to be near his wife, who has been through a terrible accident.

Without thinking about her recently deceased son, the woman searches for peace from the immensity of all that water.

During a long windless day, they see a black yacht that seems to be in bad condition in the distance.

Before deciding what to do, they see a lone man approaching a small rowboat.

He seems shocked and doesn’t want to tell them what happened, simply saying that everyone else on board the boat is dead.

The husband then decides to go and check for himself, but not trusting the man; he locks him in a cabin.

Unfortunately, he breaks free, kidnapping his wife and seizing the ship while on the black yacht to investigate.

The vessel is almost completely flooded, and below deck are the bodies of friends killed by the madman.

In the great emptiness of the Atlantic Ocean, without asking anyone for help, the officer realizes that he must fend for himself.

At that point, the only hope is to repair the yacht and chase them to save his wife, hoping to arrive in time before another murder.

Phillip Noyce is not someone we will ever call a master filmmaker; however, he knows his craft well.

Whether you like it or not, this director has some excellent box office hits in his filmography.

I liked, for example, Patriot Games and The Saint, or Blind Fury with Rutger Hauer playing a blind swordsman.

Dead Calm remains his most brilliant movie, building a tense and exciting thriller with only three actors and two boats.

Of course, we must also say that the three protagonists of this story are three actors with exceptional talent and careers.

Sam Neill plays the husband’s perfection, initially grieving for his son, who tries to be strong for his wife.

Severely emotionally scarred and still far from healing, the woman has the beautiful face of a young Nicole Kidman.

The actress was far from her marriage to Tom Cruise, which would undoubtedly have exponentially increased her notoriety.

Nevertheless, her talent was already unquestionable and perfectly matched by the great Neill, already a cinema veteran.

Finally, the psychopath is the great Billy Zane, young and handsome as well as equally dangerous.

By the way, the actor will also play the villainous husband in the initially mentioned Titanic.

Who knows, evidently, the movies with water, boats, and beautiful women make sick to the poor Billy.

In short, we have a thriller that works like a clockwork bomb, perhaps predictable but highly effective.

Let’s bring it back from the shallows and enjoy it all together, as one of the best movies of the ’80s.

Sinister – The Secrets Of One...