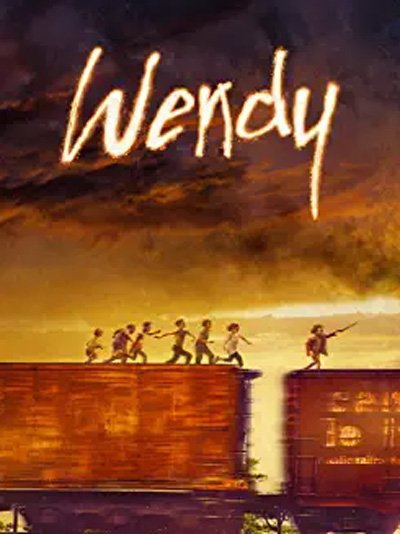 Wendy is a splendid low-budget movie from 2020, which re-invents the famous story of Peter Pan in a childlike way.

It all begins in a humble diner near a train station in a small town in the United States.

Little Wendy and some friends are playing when suddenly one of them notices something strange and, leaving the group, disappears into thin air.

Many years later, the little girl is still thinking about her lost friend, helping her mother by being a waitress in the diner.

One night, however, peeking through the window, she sees someone running on the roof of a train.

Along with two other boys, she begins to chase him when this stranger pushes her, making her fall into the river.

Incredibly, emerging from the water, they all discover magically arrived on a distant tropical island.

In that place lives a small tribe of children who never age, through the power of a mysterious underwater creature they call Mother.

But when one of the three friends is injured and drowns during a game, the other begins to grow sadder and angrier, rapidly aging.

The little girl then flees to the other side of the island to find him, discovering many other older men.

All of them are children who suffered the same fate as her friend and now want revenge on their mother.

At that point, the final confrontation between the two groups is inevitable, as Wendy tries to make peace between them.

Could Neverland be a trap?

In this 2020 movie, Neverland, Wendy’s end up is not exactly like the original Peter Pan story.

While maintaining some commonalities, in this case, the line between the good guys and the bad guys is not so clear.

Young Peter seems to be stupid and cruel at times, just as we have a more human and understanding Captain Hook.

This time there are no fairies or other magical creatures besides the mysterious being called Mother.

Children want to see him as a benevolent deity, but is he really?

After all, it is pretty cruel to punish someone like Captain Hook because he suffers the loss of a friend.

In this world, then, the laws of nature bend to the rules of an arbitrary and contradictory magic.

But unfortunately, we know well that fear and obtuse human stupidity can break any kind of law.

When the young and the old can no longer live together, the return to violence is inevitable in Lord of the Flies.

Fortunately, as in the best fairy tales, the imagination and goodness of a little girl is the most potent weapon.

Indeed, in this Peter Pan of 2020, Wendy is the movie’s heroine and the only truly innocent child on the entire island.

A simple yet complex movie

Benh Zeitlin makes his second movie after his very young debut with Beasts of the Southern Wild.

The director shows excellent talent in the not easy task of directing a cast composed almost entirely of children.

Above all, Devin Frence passionately plays Wendy, a little dreamer of fun and freedom.

Unfortunately, after she arrives in Neverland, she will discover very soon that freedom cannot exist without responsibility.

In a world where everyone is free to do what they want, someone will inevitably suffer or get hurt.

Yashua Mack is a convincing Peter Pan, charismatic leader of the group of children and their endless games.

This character is likable yet completely selfish, not caring at all about the suffering of others.

Perfect is Gavin Naquin in the role of James / Captain Hook, who then ages in the actor Kevin Pugh.

Suffering inevitably leads him to resentment and the final confrontation with Peter Pan, becoming the famous bitter enemies we know.

I watched Wendy of 2020 expecting a kids’ movie since it is based on the famous Peter Pan story.

Instead, I found something very adult, which deals with the themes of fear and desire without hiding behind banality.

Therefore, I recommend it for family, being sure that it will make you discuss it once you finish it.